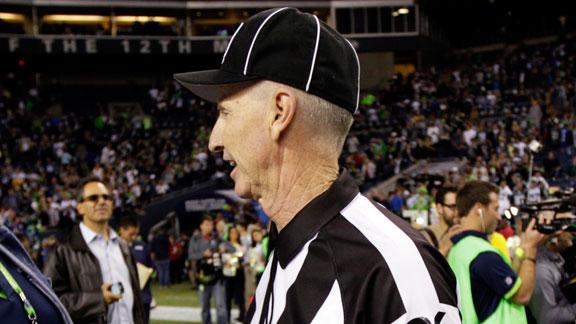 The 55-year-old Easley, in a series of interviews with Yahoo! Sports, said he has been plagued by panic attacks, depression and even suicidal thoughts over the past year.

"Right now I'm just trying to keep my life together," Easley told Yahoo! Sports. "It's really difficult. It's almost like a funeral. In the days around it you have a lot of support and you make it through. But as time goes by, you still have to process [the loss of a loved one].

Easley was at the center of one of the most controversial endings pro football has ever seen.

During a regular-season "Monday Night Football" game between the Green Bay Packers and the Seattle Seahawks, Easley, a replacement official working the game as a side judge, ruled that a final-play heave by Russell Wilson was caught by Golden Tate for a touchdown -- despite another replacement ref signaling a touchback, meaning he thought it was an interception by Packers safety M.D. Jennings.

"By rule, I got it right," Easley told ESPN.com in September. "By rule, there's nothing else I could do with it. People ask me that all the time. They'll say, 'I'm sorry, but you made a bad call.' Then I say, 'Tell me, by rule, how I made a bad call?' And they can't. You have to go by the rules.

Easley immediately became the butt of jokes. He also told Yahoo! Sports that he was the subject of threats and was scorned by media, players, coaches and even members of that night's officiating crew.

"I was completely under attack," he told Yahoo! Sports. "... Nobody died. There were no laws broken. It wasn't scandalous. There was no sex tape. I didn't do anything wrong. It just happened to be a contentious call right when everything was spiraling out of control."

The Packers again visit Seattle in the NFC Championship Game on Sunday.

Easley, who admitted that he has struggled with depression over his life from time to time, told Yahoo! Sports that he has been on doctor-ordered medical leave from his everyday job at Bank of America since June and that his 28-year marriage fell apart in September.

He has consulted with medical experts and counselors, taken doctor-prescribed drugs and entered an acute psychiatric facility as well as making two visits to a mental health rehab center.

"I am not the same guy I used to be," Easley told Yahoo! Sports.

"I know I'll recover. I know it. It's just going to take time to get through it."