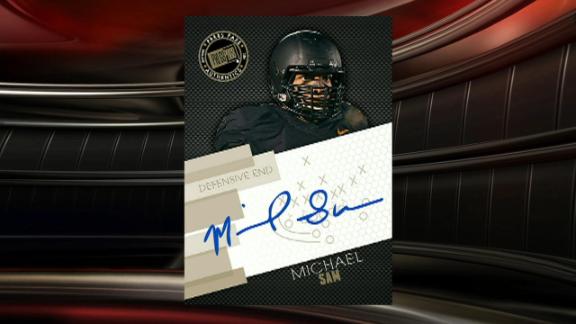 The turnout for Sam, who could become the first openly gay NFL player, bested the crowds at signings by four of his Missouri draft-eligible teammates, including quarterback James Franklin, held at the same location and put on by the same company earlier this month.

"He has outsold them by at least a 2-1 margin," said Ryan Houston, president of the St. Louis Card Company, whose shop is inside the Chesterfield Mall, located about 100 miles east of Missouri's campus in Columbia, Mo.

Sam's autograph on mini-helmets and photos cost $30, while fans who wanted his autograph on magazines were charged $35. Inscriptions, including "2013 SEC Defensive Player Of The Year" cost an additional $10.

Michael Hughes, whose company, Radtke Sports, partnered with the St. Louis Sports Company on the signing, said he inked Sam to a nonexclusive autograph deal before he came out last month and that prices didn't change due to the increased interest in Sam.

Sam chatted with Tigers fans as he signed, stopping to take the occasional photo.

"We're extremely proud of Michael," said Bobby Torgoley, a Missouri alumnus and an attorney in St. Louis, who had Sam sign an 11-by-14 inch photo and a Missouri helmet. "He is a pivotal player in changing the attitudes toward a group that was previously held down."

The biggest break in the signing, which lasted about an hour and a half, took place when military veteran Phil Carroll, who said he served in Afghanistan in 2008, handed Sam two interwoven bracelets called Survival Straps.

On a dog tag attached to the straps, Carroll had it inscribed: "Michael, You are loved, You are backed, You are strong, Never change."

Sam came around the table to hug Carroll, who said the bracelets helped him deal with post-traumatic stress disorder and his sister, who revealed to the world that she is gay.

"I wanted him to have a constant reminder of who he is and to not be affected by someone else's opinions," Carroll said.

In preparation for the event, Houston said that he has been monitoring the communications put out by the activist group Westboro Baptist Church, which protested on Missouri's campus after Sam announced that he is gay. Houston also said he hired more security than he ever had for any other signing to make sure the Sam event was incident-free.

Sam, who had his pro day on Thursday and is projected to be a late-round NFL draft pick in May, did not talk to the media.