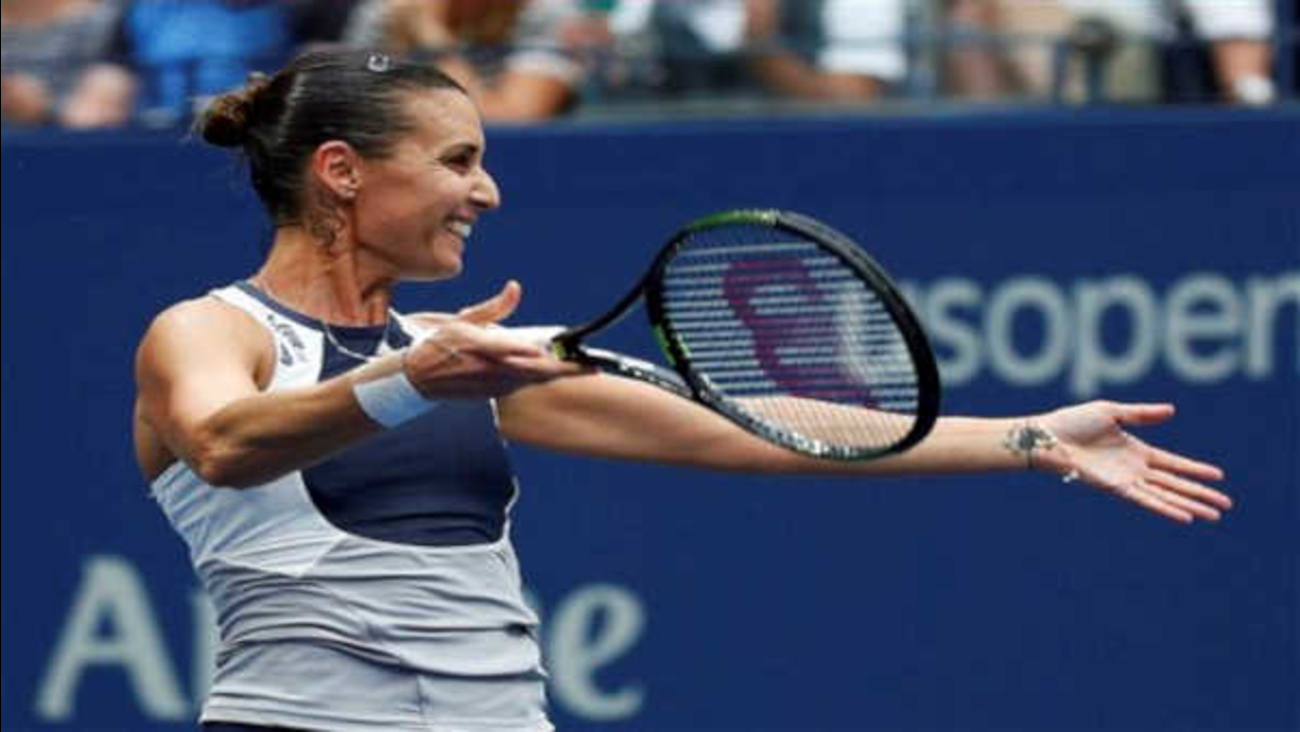 FLUSHING -- Talk about going out on top: Flavia Pennetta won the U.S. Open for her first Grand Slam title at age 33, and then announced during the trophy ceremony she has decided to retire.

Pennetta did not have to beat Serena Williams in the final. Instead, Pennetta needed to get past the woman who ended Williams' Grand Slam bid, Roberta Vinci. And Pennetta was able to do just that, pulling away in a matchup of Italians who were opponents and doubles partners as kids.

In one of the unlikeliest major finals in women's tennis history, the 26th-seeded Pennetta beat Vinci 7-6 (4), 6-2 at Flushing Meadows on Saturday - a month after deciding she was ready to hang up her racket, a decision she kept private.

"This is how I say goodbye to tennis," Pennetta said as her fianc, tennis player Fabio Fognini, captured the scene with his phone's camera. "I couldn't think to finish in a better way."

That announcement served as a perfectly out-of-nowhere conclusion to a surprise-filled tournament, the biggest shock being Vinci's win against Williams in the semifinals Friday. That stopped Williams' 33-match winning streak in majors and her attempt to become the first player since Steffi Graf in 1988 to win all four Grand Slam tournaments in a single season.

Pennetta is the oldest woman in the Open era, which began in 1968, to become a Grand Slam champion for the first time. Vinci, who is 32, would have earned that distinction had she been able to follow her stunning upset of Williams in Friday's semifinals with another victory.

This was the first major final for either participant, and the first time since WTA computer rankings were instituted in 1975 that both U.S. Open women's finalists were ranked outside the top 20 (Vinci is 43rd).

They grew up 40 miles (65 kilometers) apart in coastal towns in Puglia, a region on the heel of Italy's boot-shaped peninsula, and have been facing each other on court for two decades - with the stakes much lower, of course. They shared some laughter and tears in the locker room together Friday while watching a video of a TV interview they did back in 1999, when they won a junior doubles title at the French Open as teenagers.

And when Saturday's match ended, after Pennetta flung her racket overhead, she went up to the net to find Vinci, not for a handshake but for a lengthy hug. Vinci patted her pal on the back repeatedly, while Pennetta cried. Then they sat on adjacent sideline chairs and chatted, just a couple of foes and friends, sharing a special moment.

Vinci pantomimed throwing a punch as a joke, and Pennetta wrapped an arm around her. Vinci charmed the crowd later, first saying she wanted the champion's trophy, not the one for the runner-up, and then pretending to steal Pennetta's $3.3 million check.

"We know each other since forever," Pennetta said. "We spend so much time together, we could write a book about our lives."