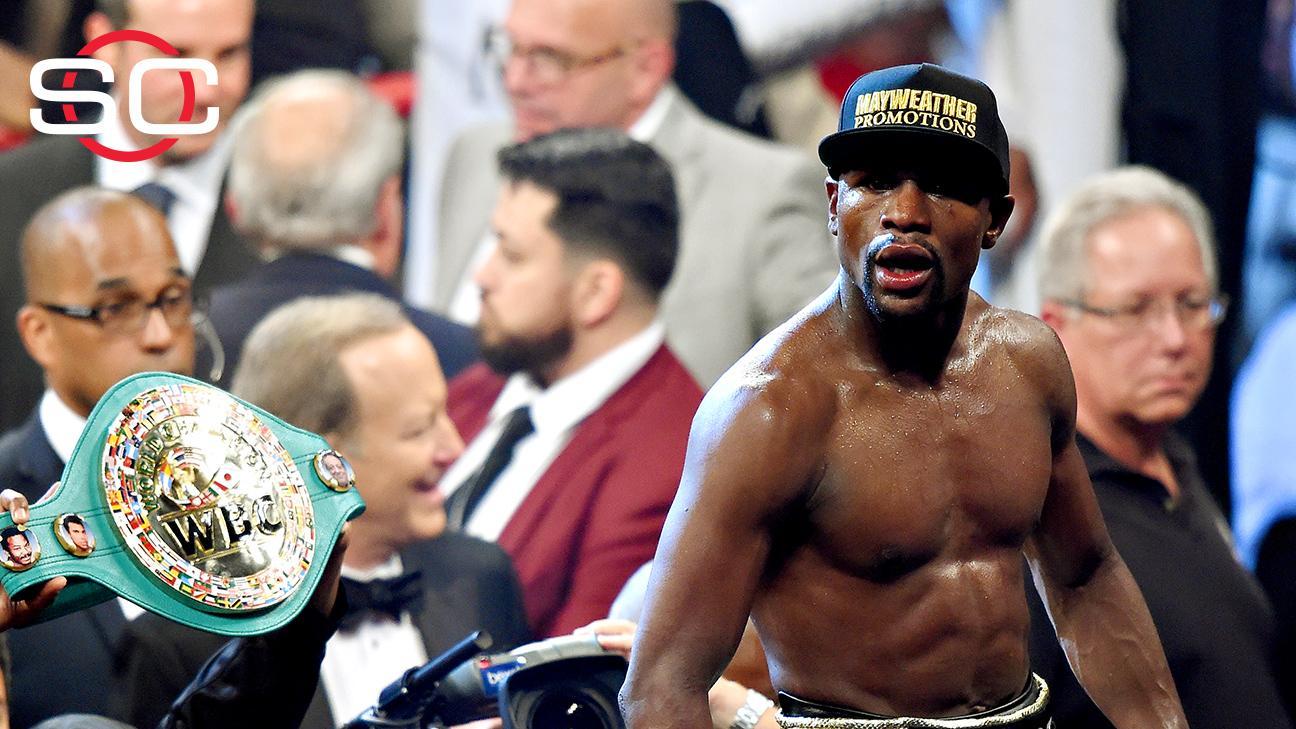 And king of the era.

Mayweather turned in a vintage performance as he outboxed Manny Pacquiao in a brilliant display to win a unanimous decision in one of the biggest fights in boxing history before a sold-out and star-studded crowd of 16,507 on Saturday night at the MGM Grand Garden Arena.

The massively hyped fight, more than five years in the making, became a global event. While it was not the drama-filled battle many had hoped for, it was an impressive performance from Mayweather, the master boxer, who never allowed the more powerful Pacquiao to deliver any truly big punches as he pulled away in the second half of the fight.

Mayweather, who had many harsh words for Pacquiao over the years before the fight was finally signed in February, was gracious in victory.

"He's a hell of a fighter. I take my hat off to Manny Pacquiao," Mayweather said. "Now I see why he's one of the guys at the pinnacle."

There was so much on the line for the fighters, as Mayweather, already a five-division champion, laid claim to Pacquiao's 147-pound world title (in addition to the two he already owned at welterweight) and left no doubt as to the identity of the No.1 pound-for-pound fighter in the world.

More significantly, Mayweather won the legacy fight, stamping himself as the best fighter of an era he and Pacquiao have shared and dominated. During their great runs, they both won numerous world titles and beat five common opponents, all likely Hall of Famers, in Oscar De La Hoya (already inducted), Miguel Cotto, Ricky Hatton, Juan Manuel Marquez and Shane Mosley.

And while the fight took years to make because of the intense squabbling between camps that do not like each other, Mayweather said it was worth the wait.

"He is a true champion at heart, and we both did our best tonight. When the books are written, it will be a great fight," he said.

Perhaps history will not record it as a great fight, but it will go down as the richest. It generated a live gate of approximately $74 million, and the pay-per-view television audience-- at about $100 per buy -- is expected to shatter the pay-per-view buy record (2.48 million) and pay-per-view revenue record ($150 million) set by previous Mayweather fights. In all, organizers expect the fight to generate some $400 million, and it was so big that it brought together rival networks HBO, which has Pacquiao under contract, and Showtime, Mayweather's broadcast home.

Mayweather, already the highest-paid athlete in the world in recent years, is expected to earn an estimated $180 million from the fight and Pacquiao around $120 million.

Money aside, the competitive juices still flowed through both. Mayweather had said before the fight, "I never wanted to win a fight so bad in my life."

After the fight, he said, "I knew he was going to push and win some rounds. He had some moments, but I kept him on the outside. I didn't get hit with a lot of shots, unless I stood in the pocket. I'm a calculating fighter, but he's a tough competitor.

"My dad [trainer Floyd Mayweather Sr.] wanted me to do more, but Pacquiao is a tough competitor and an awkward fighter."

Pacquiao thought he should have gotten the decision.

Pacquiao also said after the fight that he injured his right shoulder in training, and his camp said Nevada boxing commissioners denied a request for him to take an anti-inflammatory shot in his dressing room before facing off with Mayweather.

"The ruling made tonight affected the outcome of the fight," promoter Bob Arum said.

It was a tension-filled bout, as Mayweather and Pacquiao sized each other up early. Pacquiao winced from a borderline low blow in the third round and then backed Mayweather into a corner and fired a few shots, causing Mayweather to tie him up.

In the fourth round, Pacquiao nailed Mayweather with a hard straight left hand that sent him into the ropes, and he then unloaded numerous punches as the crowd erupted. Mayweather shook his head as if to indicate he was not hurt, but then got caught with a right hook.

Mayweather was not throwing as many punches as Pacquiao at that point, but when he did, he was accurate, especially with his jab as he controlled the distance of the fight. But Pacquiao had bursts, such as in the sixth round, when he fired straight left hands to back Mayweather into the ropes before unleashing multiple flurries.

As aggressive as Pacquiao tried to be, Mayweather was able to blunt him, blocking punches and countering with jabs and straight right hands as he seemed to get into a groove in the seventh round.

Pacquiao let his hands go when Mayweather went to the ropes but didn't land his shots cleanly enough to truly hurt Mayweather, who also never hurt him.

"I could handle his power," Pacquiao said. "He was not as strong as Cotto or [Antonio] Margarito. He is not bigger than me. I have been fighting bigger guys than him."

Pacquiao, whose southpaw style did not seem to bother Mayweather at all, continued to follow him around as he tried to land a big shot, but he couldn't.

Pacquiao trainer Freddie Roach said he thought Mayweather had old legs in the lead-up to the fight but he could not have been more wrong. Mayweather's legs were as good as ever as he darted and dashed away from most of Pacquiao's power shots.

Roach, a Hall of Famer and seven-time trainer of the year, also thought Pacquiao, the 36-year-old Filipino legend, won the fight.

"I thought we pulled it out," Roach said. "I asked him to throw more combinations between rounds but maybe he fought flat-footed a little too much."

The crowd tried to lift Pacquiao in the 12th round with chants of "Manny! Manny!" but it was more of the same as the previous several rounds as Mayweather boxed, moved and countered. That is the style that made Mayweather, of Las Vegas, an all-time great, and he wasn't about to change when he didn't have to -- even as Pacquiao pursued him with a seeming sense of desperation as the seconds wound down to the end of the fight.

For the fight, Mayweather landed 148 of 435 punches (34 percent) while Pacquiao suffered through one of his worst offensive performances, connecting on just 81 of 429 blows for a paltry 19 percent against one of boxing's all-time great defensive fighters.

Pacquiao, boxing's only eight-division titleholder, said he would "take a vacation and take a rest" before contemplating his future. Given the rancor between the camps and networks, a rematch seems unlikely, especially with the clear nature of the outcome.

Mayweather, despite the massive windfall of money, said he intends to fight again in the fall in what would be the final fight of the six-fight contract he signed with Showtime/CBS in 2013.

"I'm fighting in September, yes," the 38-year-old Mayweather said, although who he will face is a mystery. "I got one more fight with Showtime/CBS. You guys have done a remarkable job. My last fight is in September."

In another indication Mayweather is nearing the end of his career, he said he would vacate the world titles he currently holds.

"I'm a world champion in two different weight classes," he said. "It's time to let other fighters fight for the belt."

Mayweather said he wants to get out of the hurt business while he is still on top and has his money and marbles.

"I'm almost 40 years old and been in this sport for a long time, champion for 18 years," Mayweather said. "I am fighting in September, and then it's time for me to hang it up."

Whenever he does hang it up, he will take with him one of the great legacies in boxing history, one that was cemented with a dazzling performance against Pacquiao.

Information from ESPN.com's Brett Okamoto and The Associated Press was used in this report. 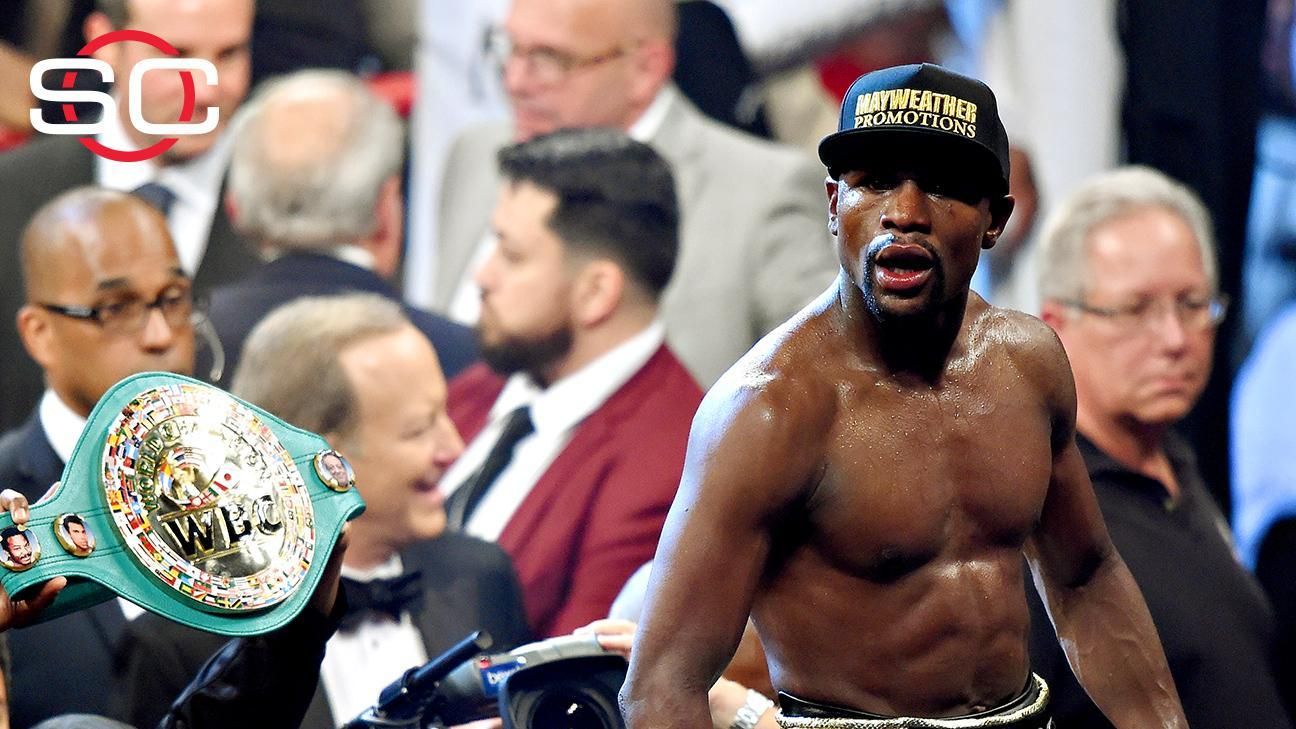 Mayweather beats Pacquiao by decision
SportsCenter Highlight of the Night: After years of buildup, Floyd Mayweather defeated Manny Pacquiao by unanimous decision in Las Vegas to improve his record to 48-0. 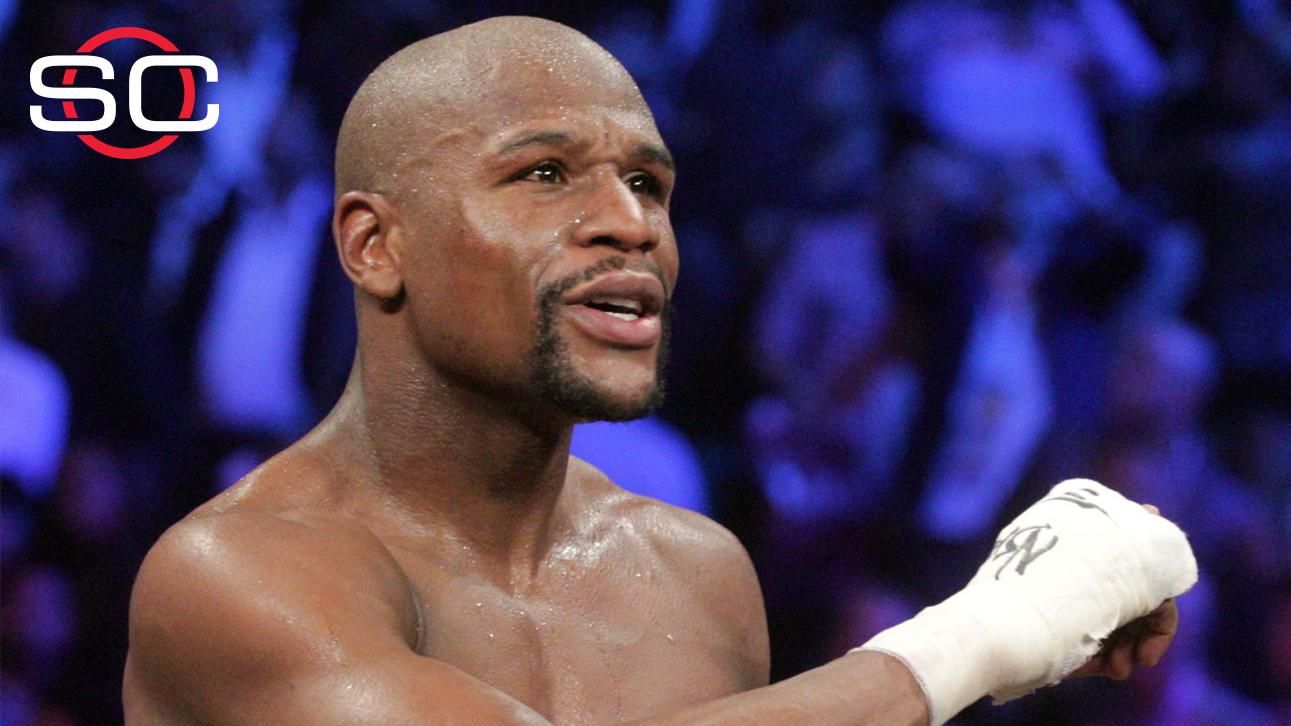 Floyd: 'I was the smarter man tonight'
Floyd Mayweather addresses the media after his unanimous decision victory over Manny Pacquiao, discussing what his father said to him in between rounds and what's next for him. 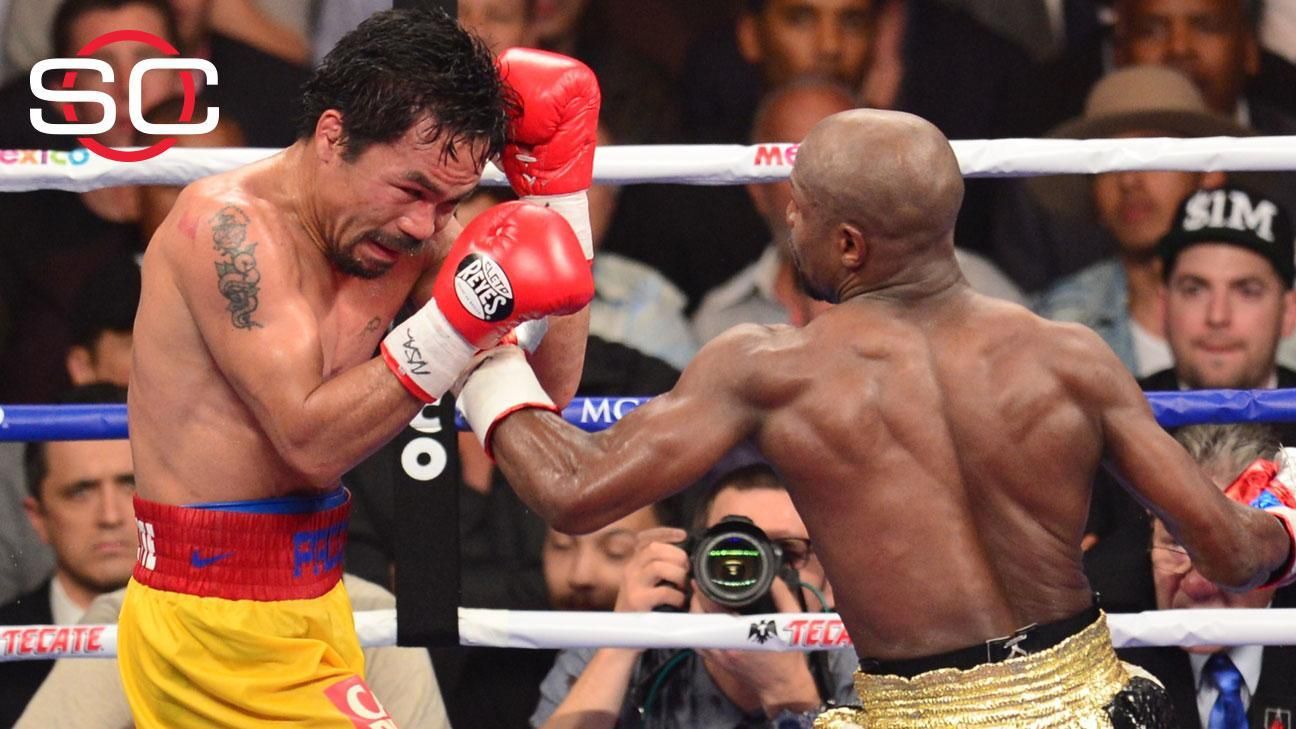 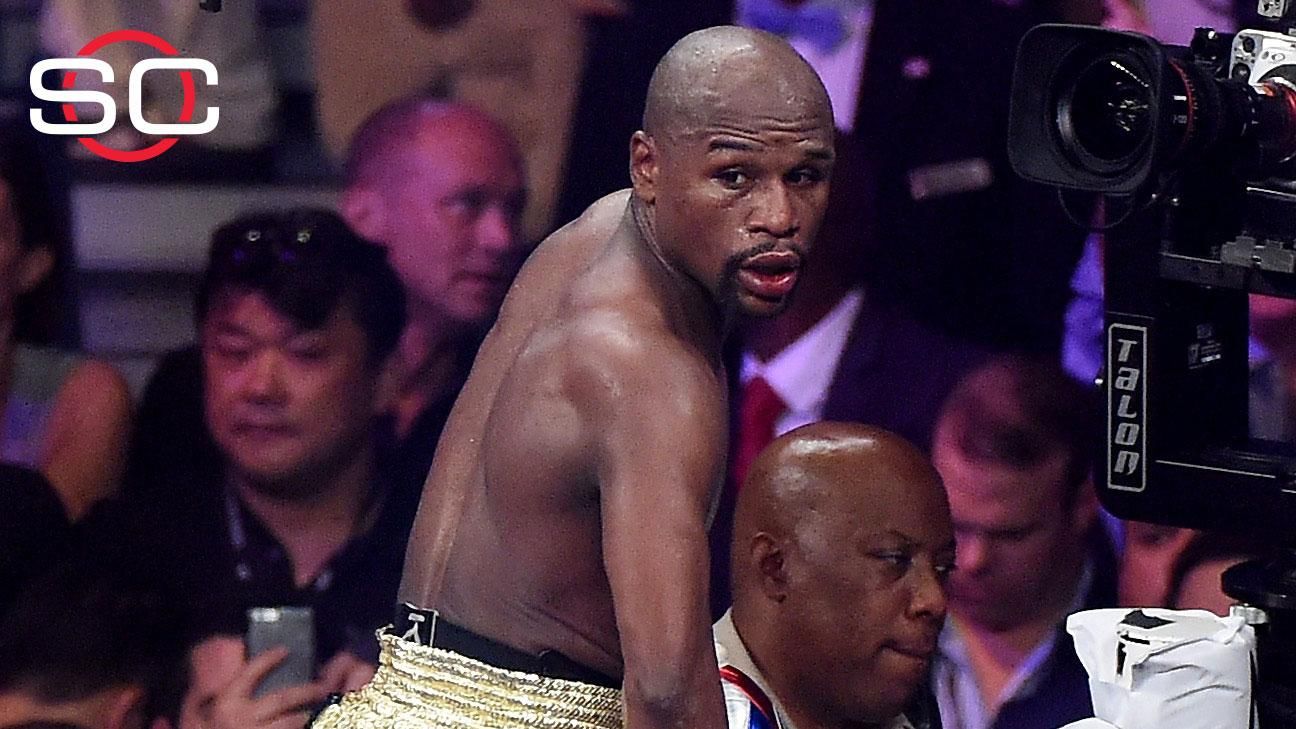 Atlas on why Floyd is still unbeaten
Teddy Atlas breaks down what was effective for Floyd Mayweather against Manny Pacquiao. 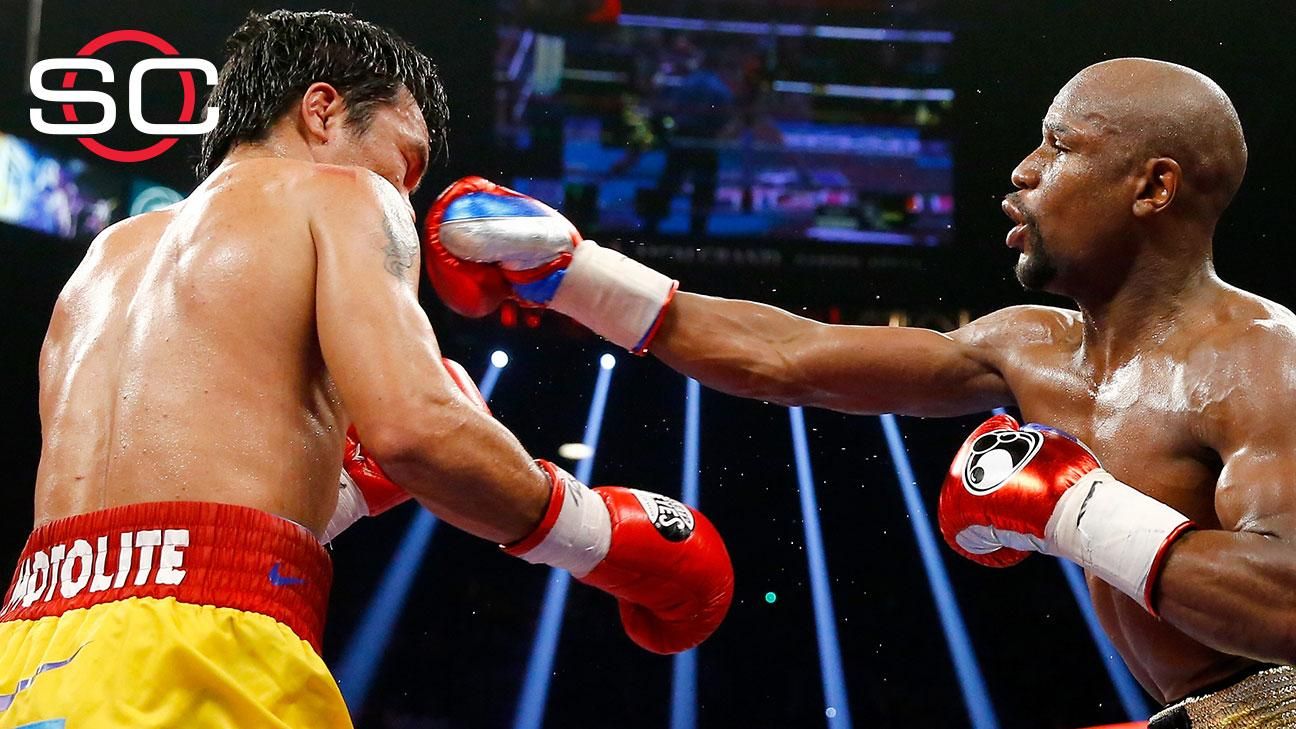 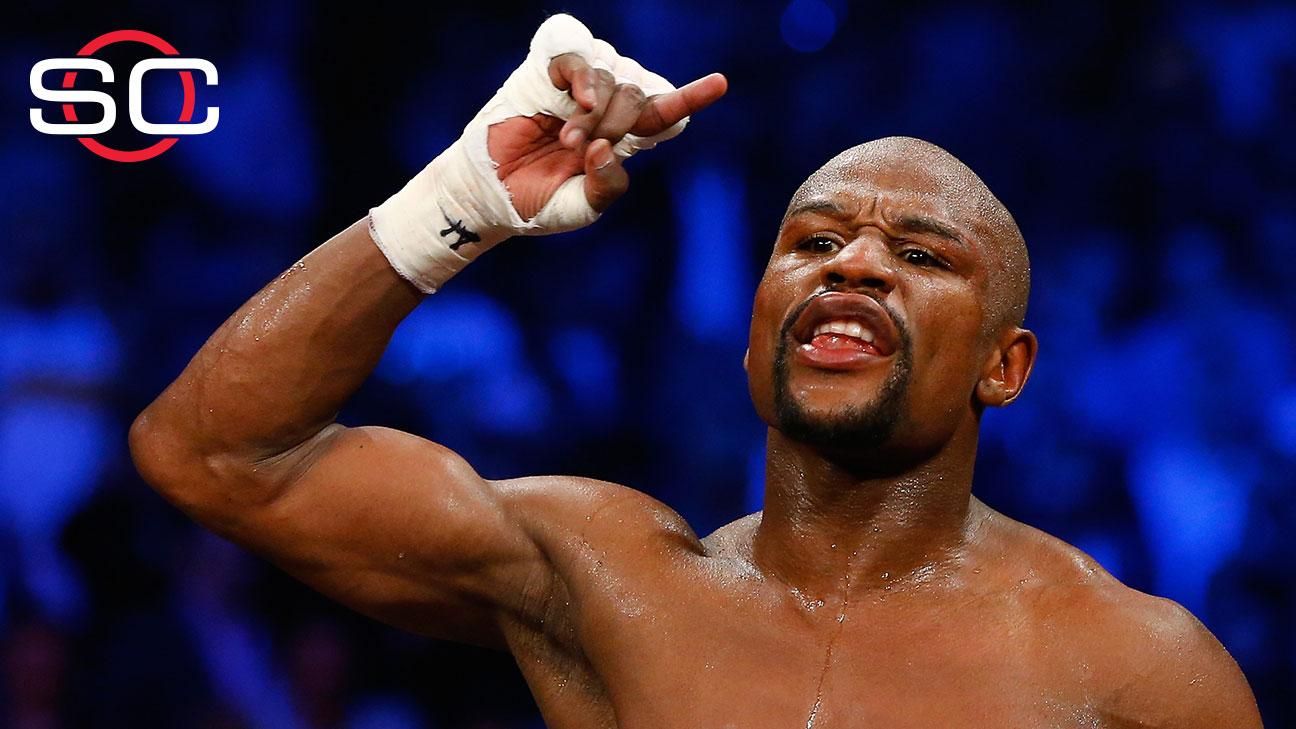