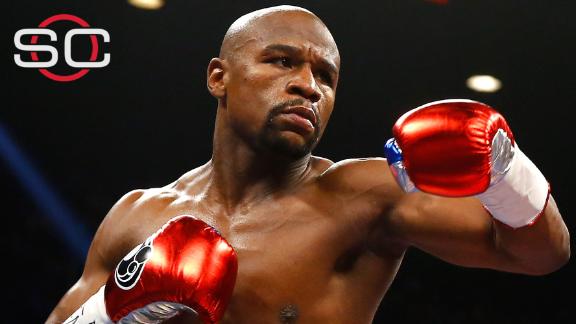 Pound-for-pound king Floyd Mayweather, four months removed from his historic victory against Manny Pacquiao in the richest fight in boxing history, said Tuesday he will return to defend his welterweight world titles against Andre Berto on Sept. 12 at the MGM Grand in Las Vegas.

Mayweather (48-0, 26 KOs), who will be fighting at the MGM Grand for the 12th consecutive time, has repeatedly said the fight, which will be televised on Showtime PPV (8 p.m. ET), will be the final fight of his brilliant, 19-year career.

The bout is the last on a six-fight deal he signed with Showtime/CBS in 2013. With a victory, Mayweather can tie the milestone 49-0 record of the great heavyweight champion Rocky Marciano.

"I'm ready to get back in the ring on Sept. 12 and prove again to the whole world why I'm the best ever," Mayweather said. "I always bring my A-game, and this fight against Andre Berto is no exception. He's a young, strong fighter who is hungry to take down the best. Forty-eight have tried before, and on Sept. 12, I'm going to make it 49."

Berto (30-3, 23 KOs), a two-time welterweight world titleholder who currently holds an interim belt, is just 3-3 in his past six bouts and viewed by many as an easy mark for Mayweather.

He is a massive underdog but said he plans to knock Mayweather off his undefeated perch.

"I'm coming to kick Floyd's ass on Sept. 12," Berto said. "Best believe that I plan to bring it to Floyd and I'm not concerned about what 48 other fighters have been unable to do. Somebody is getting knocked out, and it won't be me. You don't want to miss this."

A news conference is scheduled to take place at 3 p.m. PT Thursday in downtown Los Angeles. The event will be closed to the public.

On May 2, Mayweather won a unanimous decision in a welterweight title unification fight against Pacquiao, a long-awaited fight five years in the making. It shattered every conceivable revenue record.

The fight generated more than $500 million and crushed the all-time pay-per-view record, selling 4.4 million subscriptions at a record price of around $100.

Yet Mayweather, for all of the success and money and a victory over Pacquiao in his legacy fight, still had the hunger to go back into training camp last month to prepare for a September fight, even if few expect Berto to give him nothing more than a good workout.

Leonard Ellerbe, CEO of Mayweather Promotions, said Mayweather will not have a letdown against Berto.

"One thing we know about Floyd is that he always comes prepared," Ellerbe told ESPN.com. "Floyd Mayweather has never been in a fight where he's not prepared. He always comes ready to do his job each and every time he comes to the ring. He never overlooks anyone.

All three are coming off recent victories against better opposition than Berto has faced in the past two years.

In late June, when Mayweather, 38, of Las Vegas, met the media while promoting the Porter-Adrien Broner fight at the MGM Grand, he made it clear that he thought he deserved to be able to pick a lesser opponent for his final bout.

That is what he has in Berto, 31, of Winter Haven, Florida, who has won two fights in a row, albeit against lesser opponents. He defeated Josesito Lopez by sixth-round knockout on March 13 to claim a vacant interim belt and Steve Upsher Chambers by a lopsided 10-round decision last September.

Selling a match with Berto -- for a likely price tag of $64.95 (more for HD) -- probably will be very difficult, especially considering how many people remain upset and disappointed over the Pacquiao fight.

Ellerbe said he and Mayweather are not concerned about that.

"We don't worry about things like that," Ellerbe said. "One thing we do know is Berto is always in an exciting fight. He's been in two fight of the year (candidates) against Victor Ortiz and Robert Guerrero. With that being said, we know it's going to be guaranteed excitement.

"And this will definitely be Floyd's last fight, and the fans will get a chance to witness history."

Sports Book William Hill, which originally opened Mayweather as a minus-1,600 favorite two weeks ago, had odds of Mayweather -2,400 and Berto +1,200 on Tuesday after the announcement of the fight. William Hill reported early action was one-sided, in favor of Mayweather.

The Westgate SuperBook made Mayweather an even bigger favorite, opening the champ at -4,000.

"When Showtime Networks and Floyd Mayweather teamed up for the first time in 2013, it was called a record-breaking deal -- and that's exactly what it has been," said Stephen Espinoza, executive vice president and general manager of Showtime Sports. "Through five fights of the six-fight term, the results have exceeded our grandest expectations. Floyd has never hesitated to take on the best of the best in his division.

"In Andre Berto, Floyd has chosen an opponent who always comes to fight and always entertains. Berto's power and athleticism make him a legitimate threat against any opponent, and against Floyd, we expect Berto to be as aggressive as ever."

The fight was announced just 40 days before fight night, which is very short notice for a major pay-per-view. Ellerbe said the reason was because they wanted to announce other fights on the card at the same time.

Many believe that Showtime was negotiating with Mayweather for rights to future fights should he stick to his retirement plans but later decide to come back for a potential 50th consecutive victory. Showtime and Ellerbe denied that.

There also were discussions about putting the fight on CBS as opposed to pay-per-view, but those discussions did not pan out for a variety of reasons.

Ellerbe said that to put the fight on CBS, they would have needed much more time to pull it off. They also would have needed to sell a lot of advertising to cover the costs, including what is likely to be a purse of at least $35 million for Mayweather.

Information from ESPN.com's David Purdum was used in this report.