Football, with touch of beach, at UCF 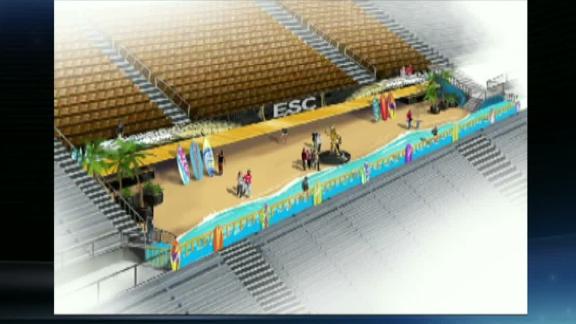 Can't decide between the beach and a football game? Now fans of UCF don't have to choose.

The school announced Monday a new area of the stadium called The East Side Club that will include high-top tables and frozen drinks. Membership to the club, which includes access to the 10,000-square-foot area that runs 25 rows off the field and between the 30-yard lines, costs $900 per person and includes a season ticket with a chair-back seat above the beach section.

The school is taking out 2,000 seats to make way for the new club area, but those seats are being replaced with about 950 to 1,000 chairback seats.

"The alumni base has an average age of 32," said Zack Lassiter, a senior associate athletic director at the school. "So they're extremely young and are more likely to embrace different things."

Each club ticket comes with a parking pass and access to the area both before and after the game.

Aside from the membership fee, UCF could also increase its food and beverage revenue. Lassiter said the club area, which will serve beer and alcoholic drinks, will have exclusive items not found in other parts of the stadium.

Despite a 21-4 record in the past two years and a 15-1 record in the American Athletic Conference, UCF head coach George O'Leary has expressed frustration over attendance numbers. Only 30,920 fans showed up at the last home game of the season.

Lassiter said the beach club idea was executed quickly because the stadium, built in 2007, is made out of steel instead of concrete. The beach play is not unique. This past season, the NFL's Jacksonville Jaguars built cabanas and pools inside their stadium.

Said Lassiter: "If this is successful, we might do other areas of the stadium."