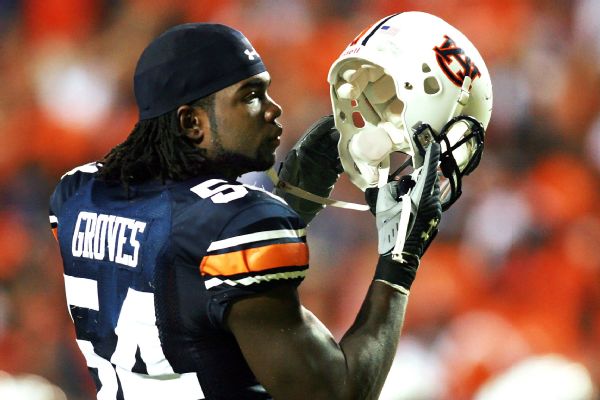 Kirk Sampson said Groves died in his sleep while visiting Trinidad, where his wife is from.Sampson said he didn't know the cause of death.

Groves played for the Tigers from 2004 to '07 and finished with 26 career sacks, tying the school's all-time record. He earned first-team All-SEC honors as both a junior and a senior, and his senior class won more games (50) at Auburn than any other class in school history.

"I am devastated and in disbelief by the sudden passing of Quentin," Auburn athletic director Jay Jacobs said. "He had a vibrant smile, a big personality and was full of life. ... Quentin was one of my favorites and I always enjoyed spending time with him. He lived life to its fullest and had a great love for his family and friends."

Medical tests at the 2008 NFL combine revealed that Groves had Wolff-Parkinson-White syndrome, which causes a rapid heartbeat. He had what is described as a "minor" heart surgery after the combine, and two months later, he was chosen by the Jacksonville Jaguars in the second round of the NFL draft.

Groves played seven seasons in the NFL with five different teams. His most recent stint came prior to the 2015 season, when he signed a contract with the Buffalo Bills. However, he was cut before the first game.

"Quentin was an outstanding man, on and off the field," former teammate and current Jaguars tight end Marcedes Lewis said in a statement. "He made everyone around him better and always had a smile on his face. He pushed me every day in practice and was a fierce competitor.

"I'm very grateful to have had an opportunity to spend two seasons with him. My thoughts and prayers are with his entire family on this incredibly sad day."

Groves met his wife, Treska Baptiste, at Auburn when he played football and she ran track. The school said he is survived by Baptiste and their two children.