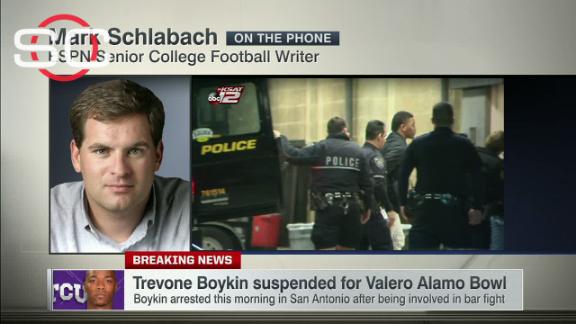 In his first public comments since Trevone Boykin was arrested for third-degree assault Thursday and suspended for the Valero Alamo Bowl, TCU coach Gary Patterson expressed his disappointment over the incident and his hope that players learn from his quarterback's mistake.

"It's unfortunate for him because Trevone has meant so much to TCU. We love him," Patterson said Friday morning during a joint news conference with Oregon coach Mark Helfrich. "But he understands. It wasn't even a conversation between him and I.

"It was one of those situations where he was there at curfew, and then I get a call early in the morning that he wasn't at curfew. Everybody makes decisions."

Boykin was arrested early Thursday morning in San Antonio after fighting at a bar and then allegedly striking a bicycle patrol officer. He was formally charged with assaulting a public servant, resisting arrest and public intoxication. TCU sent Boykin home after he posted a $5,000 bond and was released from custody Thursday morning.

Boykin apologized Thursday for his arrest, saying that he had "no excuses for my very poor decision, and I'm embarrassed about it.'' He posted a screen shot on his Twitter account of his phone with the 216-word apology.

TCU also suspended backup receiver Preston Miller for the game. Patterson said it's his job to ensure the rest of his players understand the consequences and learn from the matter.

"You're not just teaching him. You're teaching the other 120 guys on your team, so they understand your actions have a reaction and you have to learn from it," Patterson said. "If I allowed it to repeat -- let's just say nothing happened and [Boykin] jumped curfew and went out and came back and played a great game -- then I'm going to have the same problem next year if we're good enough to go back to a bowl game."

Patterson did not announce whether senior Bram Kohlhausen or redshirt freshman Foster Sawyer will fill in for Boykin in the Alamo Bowl on Saturday (5:45 p.m. CT, ESPN), though TCU coaches are leaning toward Kohlhausen.

"For me, it doesn't make a difference which guy starts," Patterson said.

Patterson admitted he'd been looking forward to the matchup of Boykin against Oregon quarterback Vernon Adams Jr., but he reminded reporters that TCU didn't have an injured Boykin against Oklahoma and "played OK," losing 30-29 in the last minute to the eventual Big 12 champion and College Football Playoff semifinalist.

"I wanted to see Vernon vs. Trevone. You came here, you got to the end of the year and you want that last ballgame to be everything you want," Patterson said. "Hopefully it is. That's the disappointing thing for the kids and for [Boykin]. This is one experience he's not going to be a part of." 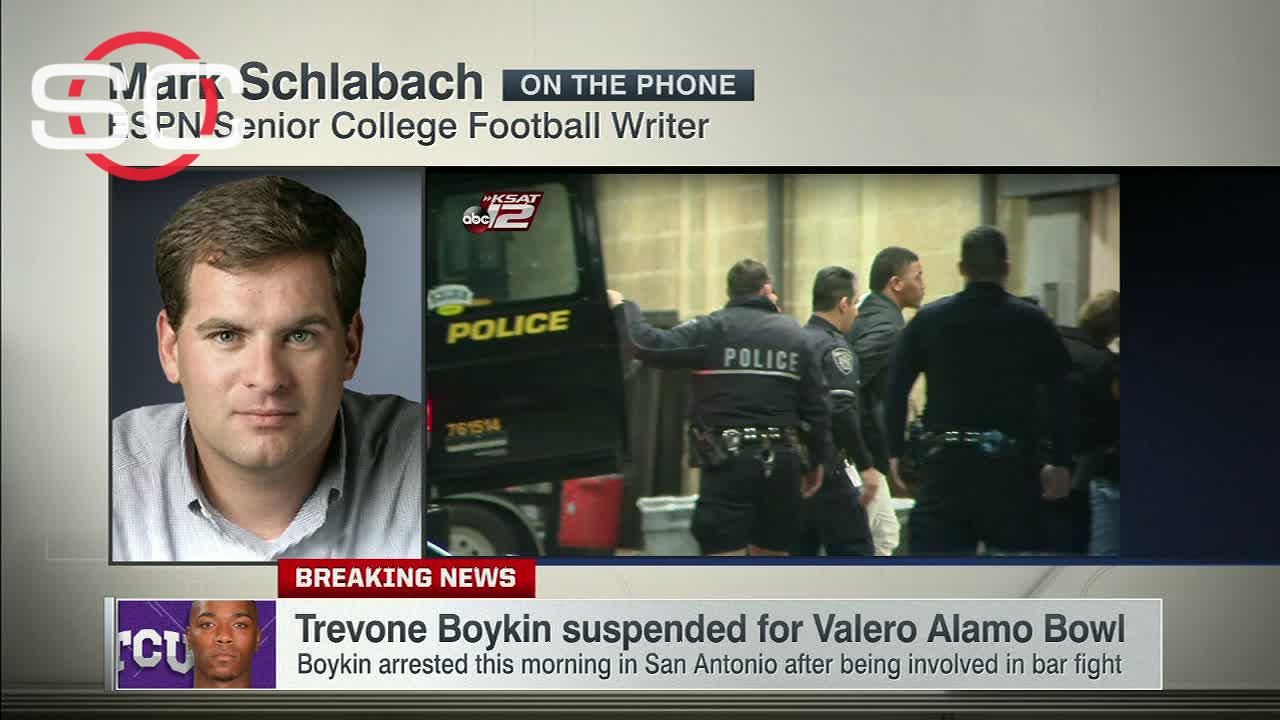