Gary Sanchez gets day off, challenged to improve defense 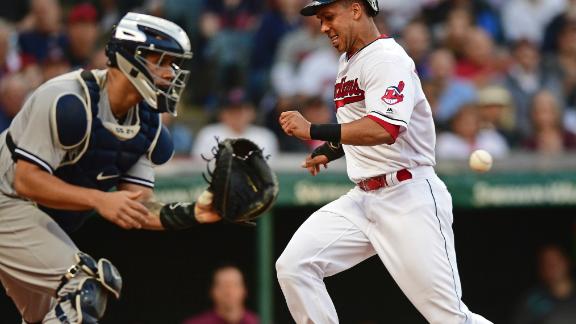 Girardi started usual Yankees backupAustin Romineeven though they were playing a day game after a night game. Girardi had said that Sanchez would be behind the plate for Sunday's game against theCleveland Indians, but the manager said he changed his mind after seeing how well Romine caught on Saturday.

"The start is not the message," Girardi said. "The message came from us verbally that, 'Your defense needs to improve. That you need to get better. You need to work at it.' We have stressed how important it is. There are certain situations that some people may not think that something that happens in the game affects the next game. It could if it leads to 10 extra pitches for a reliever."

Sanchez entered the clubhouse Sunday believing he would start.

"I was expecting to be in the game," Sanchez said after the Yankees' 8-1 win over the Indians. "I was not in the lineup. I was on the bench."

Sanchez said he didn't know why he wasn't in the lineup, adding that that was a question for the manager. He did say he needed to improve on his defense.

Girardi said Sanchez would start behind the plate on Tuesday in Toronto. The Yankees are off Monday.

Matt Holliday, the Yankees' regular designated hitter, just went on the disabled list, creating the possibility that Sanchez could be used as a DH more. Girardi said that is not what he ideally wants to happen.

"I think if he catches to his ability, then we can DH other people and have his bat in the lineup," Girardi said. "I think that is where we will be at our best."

Agreeing that his decision to go with Romine after a night game was abnormal, Girardi pointed out that Sanchez had played in 11 games in a row. Sanchez had been the designated hitter two of the past three games and just pinch hit over that span.

Girardisaid he would not describe Sunday as a benching.

"I really loved what Romine did," Girardi said pregame of the catcher's effort on Saturday.

It was almost exactly a year ago, Aug. 7, that Sanchez hit his first career home run and then became the fastest player to 19 homers in major league history. He ended up finishing second in the Rookie of the Year voting.

"The only way to get better is to practice," Girardi said.

The Yankees disciplined Sanchez as a minor leaguer. When he was 18, he was demoted a level for refusing to catch a bullpen session after not starting a game.

Sanchez's work ethic improved drastically two years ago, which he has said coincided with the birth of his daughter, Sarah.

Ross says Sanchez needs to anticipate pitches
David Ross gives Gary Sanchez a bit of leeway to his poor defense by adjusting to new pitchers on the team but says he needs to work on his fundamentals.