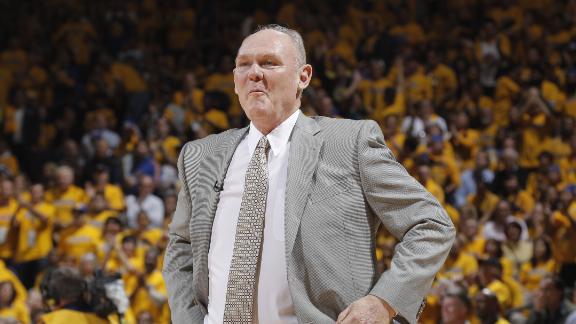 Only a dramatic and unexpected collapse in the final stage of negotiations can prevent George Karl from becoming the next coach of the Sacramento Kings, according to league sources.

Although the Kings have yet to formally announce a done deal with Karl, sources told ESPN.com on Tuesday that the organization is already operating under the premise that Karl will take over the team after the All-Star break.

The parties, sources said, were still working Tuesday on the finer deal points of an expected four-year contract that will formally establish Karl, an ESPN analyst, as Tyrone Corbin's successor and Sacramento's third coach of the season starting next week.

The sides are said to be still finalizing contract terms, such as the total worth of the financial package and whether the last year of the proposed four-year deal will be a team option or fully guaranteed. But sources said the delay in publicly confirming Karl as the Kings' new coach is at least partly due to the club's determination to help Corbin get through Sacramento's last two games before the break with no further distractions beyond what he's already faced over the past few days since Sacramento's interest in Karl became public.

Sources say Corbin was informed Monday by team officials that the Kings' games Tuesday and Wednesday in Chicago and Milwaukee would likely be his last two in charge. Corbin sports a record of 7-19 since the Kings abruptly fired Mike Malone in mid-December despite Malone's strong relationship with Kings star DeMarcus Cousins.

Asked after Sacramento fell to the Bullson Tuesday how he has personally managed to coach the team with his status up in the air, Corbin said, "I've been through a lot in this league. I played for 16 years, I've coached for 12 years. It's been a difficult time, but it's part of being in this league. I can't feel sorry for myself and allow these guys to feel sorry for themselves. We've got to come and try to do our jobs."

Cousins spoke to ESPN.comahead of the team's 104-86 loss in Chicago about the Kings' coaching situation.

"I don't fire coaches or hire them," Cousins said. "Everyone knows I liked and respected Coach Malone. I didn't want [Malone's firing in December] to happen. I'm not involved in any coaching decisions right now. I've heard that George Karl is a great coach. If that is the direction that the organization chooses, I'll support it.

"Out of respect for Coach Corbin, I hadn't planned on making any comments about what is rumored out there. But at this point I felt some things needed to be clarified."

Kings forward Rudy Gay said after Tuesday's game he felt for his interim coach over the last several days.

"The toughest thing about this stretch is how Coach Corbin was forced into this position," Gay said. "We went through training camp focusing on some things, and now he's in this position. I know it is tough for him."

Team sources say that, since it emerged Friday that the Kings were in talks with Karl about replacing Corbin, Cousins has met with Kings general manager Pete D'Alessandro only once and has not met with Kings owner Vivek Ranadive about the prospect of Sacramento hiring its third coach of the season.

Sources say Karl has begun assembling a coaching staff to join him in Sacramento, which could possibly include his son and former NBA player Coby Karl.

George Karl, who rejoined ESPN after leaving the Denver Nuggets on the heels of winning NBA Coach of the Year honors for the 2012-13 season, has not commented on the various reports linking him to the Kings' job, which began Friday with a Sacramento Bee story that the 63-year-old was in serious talks with the club.

The Nuggets hired Karl away from ESPN midway through the 2004-05 season, and several Kings executives -- D'Alessandro, assistant GM Mike Bratz and new arrival Dean Oliver -- worked with Karl in Denver.

Karl ranks sixth all time among NBA coaches with 1,131 wins and was named the league's Coach of the Year after guiding the Nuggets to a 57-25 record two seasons ago. He coached in Cleveland, Golden State, Seattle and Milwaukee before his run with the Nuggets. After Karl joined the Nuggets midstream in the '04-05 season, he led them to a 32-8 finish.

Karl Expected To Take Over Kings
ESPN's Marc Stein breaks down the news that George Karl is likely to take over the Sacramento Kings after the All-Star break.