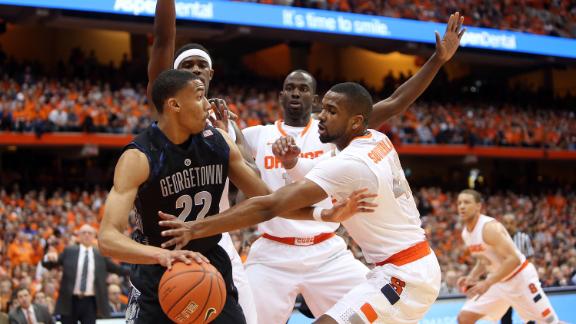 A longstanding rivalry put on hold for a few years will make a return in the 2015-16 season, as Georgetown and Syracuse announced Tuesday that they will play a four-year home-and-home series.

"We're excited to announce the renewal of the Georgetown-Syracuse rivalry," Georgetown athletic director Lee Reed said in a release. "The re-establishment of this series is good for college basketball fans across the country. I know that our program and fans will be excited to have a game against Syracuse on our schedule. This is something that both schools have worked very hard to have happen, and we're very happy to have this series continue."

Syracuse AD Daryl Gross called restarting the series the "highest priority" since the Orange moved to the ACC.

"When Syracuse and Georgetown go head-to-head, the history is unmatched and the entire nation pays attention," he said. "Clearly our move to the ACC has been tremendous on all fronts, but sometimes you can have the best of both worlds -- and this series fits that concept."

"There was talk about going to New York City and that would have been fine, but a home-and-home is good," Syracuse coach Jim Boeheim told ESPN on Tuesday. "It's a good series. It was always going to happen. We had St. John's and Villanova. I'm not sure we would have done three in one year, but we'll pick up one of those two (when the Georgetown series starts)."

The Orange hosted Villanova and visited St. John's this past season, with the sites reversing next season.

"(Georgetown) has always been a good game, good event," Boeheim said. "I'm glad we're able to keep it going with this series. We're not in the same league, so it won't have the same meaning, but it will be great."

The first game of the renewal will be the first regular-season matchup between the teams since the Hoyas beat the Orange 61-39 at Verizon Center to clinch the 2012-13 Big East regular-season title. Syracuse has the edge in the head-to-head matchup 49-41.

"At no point did we not think this was going to happen," Thompson told ESPN on Tuesday. "The length of the deal may just be a formality. I don't ever see this not happening. This is something that is important to our program and to college basketball."

He added that Syracuse was the only must-get on the schedule for the Hoyas among the former Big East members.

"We haven't ruled anyone out," said Thompson, "but that was the natural one. That was the only one we had to do."

The Orange won the most recent game between the teams, 58-55 in the 2013 Big East tournament.

The teams split 14 meetings overall in the Big East tournament. They met five times in the final, with the Hoyas winning four of those meetings. Six of 20 meetings from 2003-13 overall went to overtime, with the Orange winning five of those.

Thompson said the Hoyas will take a year off from a four-year series against Kansas that started last season in Lawrence to accommodate the Syracuse series in 2015-16. The series will resume against Kansas in 2016-17. Georgetown will host Kansas in 2014-15 before the one-year hiatus.

ESPN.com's Andy Katz and The Associated Press contributed to this report.