Giancarlo Stanton: I want to be a Marlin but team needs pitching 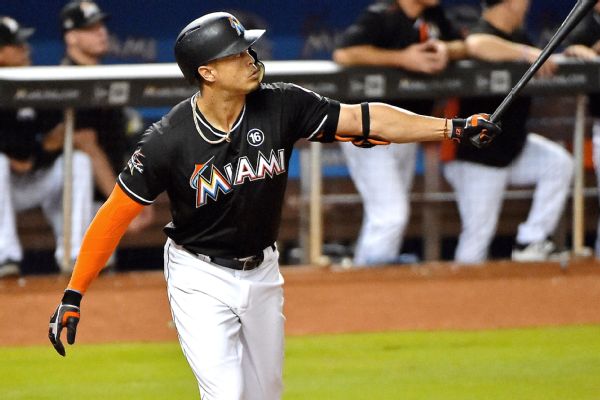 After being named the first MVP in franchise history, Miami Marlins slugger Giancarlo Stanton addressed the possibility that he would be traded by the team's new ownership.

Derek Jeter, who became the team's chief executive officer when a group headed by venture capitalist Bruce Sherman bought the team last month, said this week the Marlins must cut payroll and are listening to offers for Stanton, who won his first National League MVP award Thursday.

"It's an interesting feeling and situation for me,'' Stanton said. "This is the only place I've known, but I also understand the business part of it. The direction that new ownership wants to go. They're feeling it out. We're going to try to figure out a plan here.''

Stanton said his preference was to remain in Miami, and he wanted the team's pitching situation "to be thoroughly addressed, not just somewhat addressed.''

He's not convinced the Marlins are ready to do that.

"I'm not entirely sure, to be honest,'' he said. "I know all teams have plenty of money.''

Stanton hit 59 home runs this season, the most in the major leagues since 2001. The outfielder is owed $295 million over the final decade of his record $325 million, 13-year contract, which includes a no-trade clause.

The Marlins have not had a winning season since 2009 and have not reached the playoffs since beating the Yankees in the 2003 World Series.