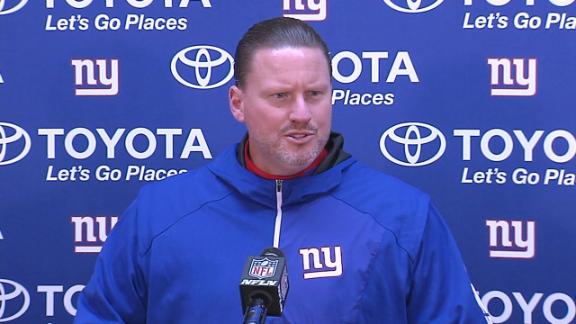 LANDOVER, Md. -- Among the notable New York Giants inactives for Thursday night's 20-10 loss to the Washington Redskins was a name that wasn't expected to be on the list without an injury: cornerback Eli Apple.

Giants coach Ben McAdoo said Apple was held out due to missed practice time and a short week. Apple participated in the Giants' only practice this week but missed time last week to attend to a personal matter. He was deactivated last week with little time to prepare for theKansas City Chiefs.

Apple, 22, was a first-round pick, No. 10 overall, by the Giants last year. He was a healthy scratch for the second straight week.

The Giants said it was a "coach's decision."

"Eli missed a lot of time last week with practice and the ball game," McAdoo said. "It was a short week without any speed. That was the reason for it."

The second-year cornerback was not on the injury report.

The Giants more than held their own last week without Apple. Veteran Ross Cockrell started in his place opposite Janoris Jenkins. Dominique Rodgers-Cromartie remained the nickel cornerback, with Donte Deayon as a reserve.

McAdoo went with the same group Thursday night, even though Apple said during the week that he was fine and expected to play.

This isn't exactly a positive sign for general manager Jerry Reese, whose draft record has been questioned. Apple is a top-10 pick who isn't even part of the Giants' rotation at the moment.

Apple's first two seasons have been filled with their share of ups and downs. He has appeared in 23 games, with 18 starts. Apple has 40 tackles with eight passes defended and no interceptions this season.

Wide receiver Sterling Shepard was also made inactive for Thursday's game due to migraine headaches.

Shepard missed Sunday's win over the Chiefs and has not practiced this week. He tried to do some light running this week, but the migraines returned.

His absence left the Giants thin at wide receiver. Roger Lewis and Tavarres Kingstarted, with Travis Rudolph playing out of the slot and the speedy Kalif Raymondavailable.

Shepard, a second-year receiver, has posted 38 receptions for 475 yards and one touchdown this season. He leads the Giants in receiving yards in 2017 on a unit that has dealt with numerous injuries.