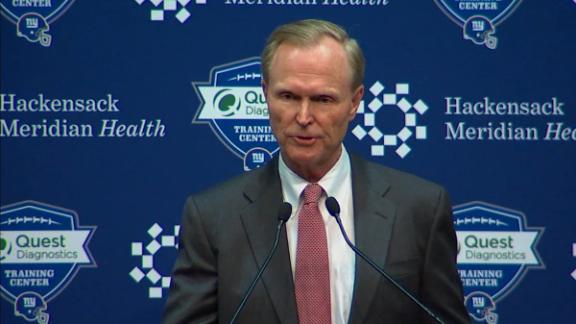 The New York Giants cleaned house on Monday, firing coach Ben McAdoo and general manager Jerry Reese in the midst of a 2-10 season.

McAdoo told ESPN's Chris Mortensen in a text message Monday morning that he was out after two seasons on the job. Giants co-owner John Mara confirmed the changes in a news conference Monday afternoon.

Mara and co-owner Steve Tisch met after Sunday's 24-17 loss to the Oakland Raiders and again in the morning. They decided they couldn't wait any longer.

"We agreed that wholesale changes needed to be made in this organization to get us back to the team that we expect to be," Mara said.

Mara said he and Tisch "agreed it was pointless to wait any longer to make these changes."

"This has been the perfect storm this season,'' Mara said. "Everything that could have gone wrong this season has gone wrong.''

The breaking point appears to have been the benching of franchise quarterback Eli Manning. Geno Smith started for the Giants on Sunday, but a source told ESPN on Monday that the team is going back to Manning.

Mara would not confirm that Manning will return as starter on Sunday against the Dallas Cowboys. He said the decision will be up to Spagnuolo.

He denied that the Manning situation had anything to do a reorganization of the team's brass.

"Had no effect whatsoever. 2-10 is 2-10," Mara said. "Public reaction to that was not pleasant but didn't really have any effect on our decision."

He later added: "You ought to stop blaming Ben and Jerry on that. If you want to blame anyone on that, blame me. I certainly had the power to overrule it if I wanted to. I chose not to do it."

The Giants host the Cowboys on Sunday at MetLife Stadium. McAdoo and a quarterback other than Manning would have been met with resistance.

There has been talk about former Giants showing up to the game and standing on the sideline in No. 10 jerseys in a show of solidarity to Manning.

"I was certainly cognizant of what the fan reaction was likely to be over the last four weeks, but that wasn't the final determining factor," Mara said. "We had reached the point where we felt, 'You know what, we're going to be making these changes probably at the end of the season, so what was the point in prolonging this any further?"

Reese has been with the Giants in various roles since 1994, serving as general manager since 2007. He won two Super Bowls with the team but has been criticized in recent seasons for failing to address problems on the Giants' offensive line.

Mara called Monday's dismissal of Reese "as difficult a meeting as I've ever had." He thinks it will not take long for him to land a similar job with another franchise.

McAdoo took over for Tom Coughlin after the 2015 season. His first year as Giants coach was encouraging. They had an 11-5 record and ended a five-year playoff drought.

Year 2 didn't quite go as planned, with the Giants struggling from the start. They lost their first five games and were officially eliminated from playoff contention before December.

McAdoo had to suspend two players (veteran cornerbacks Janoris Jenkins and Dominique Rodgers-Cromartie) for a violation of team rules, and the controversies persisted throughout the season. They also lost star wide receivers Odell Beckham Jr. and Brandon Marshall to injuries in the same Week 5 loss to the Los Angeles Chargers.

It reached a point where Giants ownership felt a need to release a statement after an embarrassing 31-21 loss to the previously winlessSan Francisco 49ersthat McAdoo would not be fired before the end of the season. The statement noted a desire to evaluate the season as a whole.

Several weeks later, after Manning was benched, Mara wouldn't guarantee McAdoo's safety through even the end of the season. It set the stage for McAdoo's ouster during a season that began with Super Bowl expectations but crashed and burned early.

McAdoo joined the Giants from the Green Bay Packers before the 2014 season. He served as the team's offensive coordinator for two seasons under Coughlin before being promoted to head coach. The Giants' offense under McAdoo showed improvement during those first two years. Manning was coming off an awful 2013 season and managed to thrive working with his new offensive coordinator.

McAdoo also wasn't especially well-received by fans as the public face of the franchise, beginning with the oversized suit on the day he was hired to his appearance on the sideline and at news conferences. Fans had been calling for his firing for weeks.

Mara says 'wholesale changes needed to be made'
Giants owner John Mara says he and Steve Tisch decided not to wait to make changes to the organization.

Could Giants hire another Coughlin-like coach?
Chris Mortensen speculates on what type of coach the Giants could hire after firing Ben McAdoo.