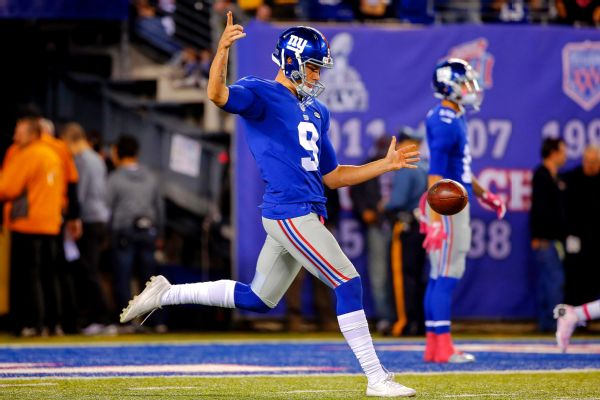 The New York Giants began cost-cutting with free agency on the horizon by releasing punter Brad Wing on Saturday.

Wing is coming off a rough 2017 season. He averaged 44.1 yards per punt, 24th among all punters. His 36.7 net average was dead last among all qualifiers.

The move frees up $1.025 million against the salary cap for the Giants, who were approximately $14 million under the cap entering Saturday.

Wing, 27, had a strong season for the Giants two years ago, when he averaged 42.6 yards per punt. He struggled badly this past season, though, and a shank late in a crushing Week 3 loss to the Philadelphia Eagles proved especially costly.

The Australian punter was acquired from the Pittsburgh Steelers just prior to the 2015 season in exchange for a seventh-round draft pick. The Giants signed him to a three-year contract extension the following summer worth just over $7 million.

Wing had two years remaining on his deal when he was cut. The Giants will incur $1 million in dead money by releasing him.

The move is part of the roster overhaul expected with a new regime in charge. Coach Pat Shurmur and general manager Dave Gettleman were not around when many of the current players were signed, drafted or acquired.

Wing, who is also one of star wide receiver Odell Beckham Jr.'s closest friends, was apparently not in the new regime's plans. The attention now turns to wide receivers Brandon Marshall and Dwayne Harris, whose salaries did not come close to matching their 2017 production.