GM: No plans to trade Ponder 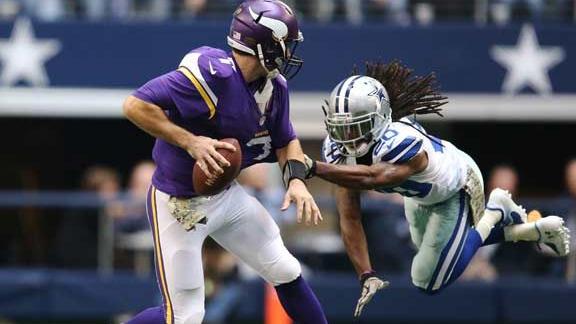 EDEN PRAIRIE, Minn. -- As he continues to prepare for this week's draft, in which he could potentially select the Minnesota Vikings' next quarterback of the future, general manager Rick Spielman said he will not trade the QB he selected in the first round in 2011.

Spielman will keep  Christian Ponder, whose disappointing performance the past three seasons is the main reason the Vikings are back in the market for a quarterback. The 26-year-old Ponder is one of two quarterbacks on the roster and is expected to back up Matt Cassel, and even though the Vikings appear to be moving on from Ponder in most senses, they aren't ready to send him elsewhere.

"That would leave us with one quarterback. I would not do that," Spielman said. "We're going to need two quarterbacks. Three."

Spielman also said he has not had any specific talks with the St. Louis Rams, in response to a question about the Vikings reportedly being interested in making a deal for quarterback Sam Bradford.

The Vikings decided not to pick up the fifth-year contract option on Ponder, whom they took with the 12th pick in 2011. That option would have paid Ponder $9.686 million in 2015, or before then if he got hurt, which would have triggered an injury guarantee on the option. Spielman said the team "just wanted to make sure we kept all our options going forward, especially financially."

Minnesota has worked out "nine or 10" quarterback prospects either publicly or privately, Spielman said, and could wind up taking one as high as No. 8. The Vikings won't be afraid to take a passer that high in light of Ponder not working out as they'd hoped, Spielman said.

"Christian's still a very young quarterback," Spielman said. "He's shown flashes, but he just hasn't been as consistent as you want yet. You can't be afraid. If there's a guy there, regardless of position, that you have strong feelings for, whether it's at 8 or 40 or wherever it is, or 16, then you take him.

"The one thing you cannot be afraid [of] in this job is to take chances or take risks on guys you feel strongly about. When you don't do that, I don't know how you get better."

Vikes Not Planning To Trade QB Ponder
Mark Schlereth discusses the growth the Vikings should expect to see from Christian Ponder next season.