Golden Knights among winners, Rangers among losers from the 2017 draft weekend 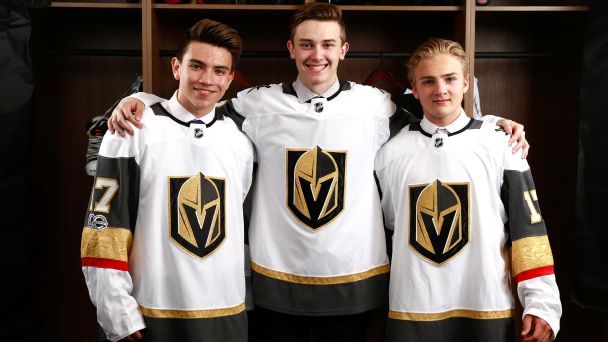 The NHL saw no shortage of moving and shaking last week between trades, the expansion draft and the entry draft. So, who were the winners and losers? Dennis MacInnis, the direct of International Scouting Services, Leslie Treff of McKeen's and Mark Seidel from North American Central Scouting helped ESPN assess which teams struck it rich and which teams struck out.

Experts agreed that the future is bright in Vegas. The Golden Knights had three picks in the top 15 and made a dozen selections overall. They got a coveted center, Cody Glass, and another potential star pivot, Nick Suzuki. Their next two picks were well-rounded defensemen, 5-foot-9 Swede Eric Brannstrom and 6-foot-5 OHLer Nicolas Hague. "I just think [GM] George McPhee and company really did a good job of trading, getting picks," Treff said.

GM David Poile's astute staff might have pulled a couple of more rabbits from their hats. In Round 1, they selected Eeli Tolvanen, a Finnish sniper with a one-timer par excellence. At the end of Round 3, they selected David Farrance, a superb two-way defenseman projected to go higher. "Obviously he's not the biggest kid at 5-10 or 5-11, but he has all kinds of skill and there's a place for those guys in the NHL," Seidel said. "A guy with that kind of pedigree who's played that well, I think that was a good pick for them."

The Leafs' brain trust continued its roll. The Leafs bolstered their organizational depth on defense, adding an attractive mix of size and skating. In Round 2, they got 6-foot-6 rearguard Eemeli Rasanen, whom Seidel named as a potential steal. In Round 1, they added defenseman Timothy Liljegren at No. 17 overall. He was second at one point in Central Scouting's European skater rankings. "His first couple steps are unmatchable," MacInnis said. "He's a slick, smooth-skating offensive defenseman."

The Oilers have selected in the top 10 for eight straight seasons, including first overall four times. Their successful 2016-17 season left them with lower picks -- their first was winger Kailer Yamamoto at 22 -- but the Oilers managed to make solid selections. After the diminutive, speedy Yamamoto, the Oilers added not only talent but size, as all six of their subsequent picks were 6-foot-2 or taller. "Every round it seemed like the best guy on the board was the guy they took," Seidel said.

The Blues beat out the Los Angeles Kings for this list. Los Angeles got a tremendous value in Gabriel Vilardi, a 200-foot player who really excels down low, at No. 11 overall. "The Kings must be doing backflips to land that kid," MacInnis said. Yet the Blues got a potential first-round steal of their own, added intriguing prospects in later rounds and made a pair of shrewd trades. They acquired Brayden Schenn from the Philadelphia Flyers for Jori Lehtera and two picks, and then dealt enforcer Ryan Reaves to the Pittsburgh Penguins for Oskar Sundqvist. With the pick they received, they snagged Klim Kostin, a Russian forward oozing with potential. "They maneuvered the draft board to get the guys that you think are valuable," Seidel said. "Universally in the industry, Kostin was considered a much better player than the 31st player in this draft."

The Rangers lost Oscar Lindberg in the expansion draft and then dealt Derek Stepan to Arizona, leaving two holes at center. They drafted two centers in the first round, including Lias Andersson at No. 7, but neither appears NHL-ready. "If you have the seventh pick, you had better make damn sure it's a good pick. He's a high-risk, high-reward pick, but he may never translate," Treff said. The rest of their draft was also viewed as suspect, including older players who, ostensibly, should be ready to contribute sooner. "I thought the Rangers could have gotten a lot more than they did, for a team that had two first-rounders," MacInnis said. "They drafted three overagers, who, as far as we're concerned, have limited upside."

Once known for their draft-day steals and magnificent prospect development, the Wings have hit a snag in recent years. That finally manifested at the top level, where they snapped their quarter-century streak of playoff berths last season. This draft might not be the one to turn things around, despite the Wings making 11 selections. "They just took a lot of guys that all the scouts were looking at each other and saying, 'Who?' " MacInnis said.

The draft has been unkind to the Coyotes of late. New ownership has been eager to puts its stamp on the franchise but the short-term outlook doesn't look good. They parted ways with coach Dave Tippett after eight seasons and franchise face Shane Doan, a veteran who spent his entire career -- 21 years -- with the franchise, including 13 as a captain. They brought in veterans Stepan and Niklas Hjalmarsson via trade, but their draft picks were underwhelming. One expert named them as a winner, but the general consensus was that they did not fare well. "I think they had a tough day. For the amount of picks that they had, nine, they might be lucky to get one player out of it," MacInnis said. "A lot of guys they drafted have red flags on them in one area or the other."
Report a correction or typo
Related topics:
sportsespnwinnersedmonton oilersst louis bluesnew york rangersbusts2017 draftsleepersstealslosersarizona coyotesnhl entry draftvegas golden knightsdetroit red wingstoronto maple leafsnhldraftnashville predators
Copyright © 2020 ESPN Internet Ventures. All rights reserved.
More Videos
From CNN Newsource affiliates
TOP STORIES