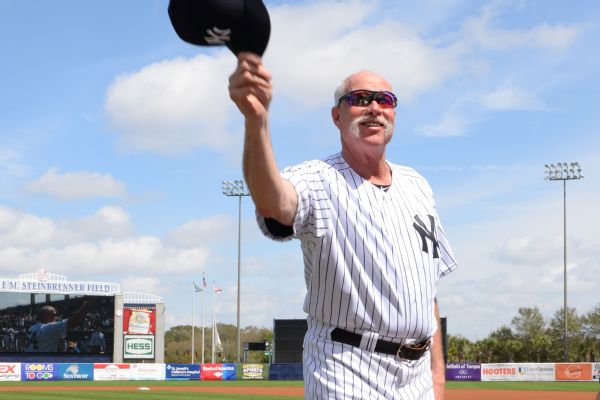 The New York Yankees are not inviting Goose Gossage to attend spring training this year, and the Hall of Fame closer clearly isn't happy with Brian Cashman.

The outspoken Gossage blasted Cashman in an expletive-laced rant to the New York Daily News, saying he isn't "a big fan" of the longtime Yankees general manager.

The YES Network was first to report Monday that Gossage, who pitched parts of 22 seasons in the majors and spent seven years with the Yankees, would not be at spring training as a guest instructor this season.

Gossage, when contacted later Monday by the Daily News, told the newspaper that George Steinbrenner is "rolling over in his grave" and said that the late Yankees owner would have fired Cashman "10 years ago."

"He would've been gone 10 years ago if George was still around," Gossage said. "He'd have been gone when he jumped out of that f---ing airplane. Do you think he's a good f---ing baseball guy, really? He doesn't believe in f---ing coaching."

Gossage told the paper that he had a falling out with Cashman during spring training. Gossage said that he asked the GM why their relationship had soured but that Cashman "didn't answer ... he didn't say a word."

Gossage, 66, has made headlines in recent years for making controversial comments at Yankees spring training. He said last year that it was "insulting" to him to be compared to Mariano Rivera because he pitched multiple innings per outing while Rivera was utilized primarily as a one-inning closer.

Gossage also ruffled feathers in 2016 when he called former Blue Jays slugger Jose Bautista a "f---ing disgrace to the game" and blasted analytics-inclined executives as a "bunch of f---ing nerds running the game."