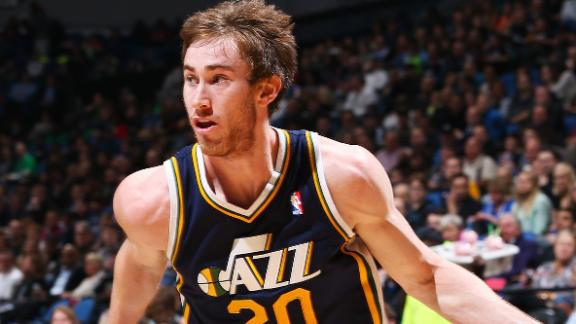 The Charlotte Hornets and restricted free agent Gordon Hayward have agreed to a four-year offer sheet at the projected maximum of $63 million that Hayward is expected to sign Thursday at 12:01 a.m., according to sources close to the process.

The Utah Jazz, who have said for months they intend to match any offer Hayward gets, will have three days to match the offer or lose Hayward as soon as the offer sheet is formally signed.

Hayward took visits to Cleveland and Charlotte once free agency began last Tuesday, but Michael Jordan's Hornets made an aggressive push this week to secure a commitment from Hayward, who previously played alongside star Charlotte center Al Jefferson in Utah.

The Charlotte Observer earlier reported that the Hornets and Hayward agreed late Tuesday.

The Cavaliers were strongly considering offering Hayward the max, sources said, until the opportunity to become a leading bidder for LeBron James arose.

The Jazz could have kept Hayward off the open market had they negotiated a contract extension with the versatile swingman back in October, but talks broke down, with Hayward reportedly seeking a four-year contract valued at $13 million annually and Utah reportedly holding firm at $12 million annually.