Greg Bird hopes to return in May after ankle surgery 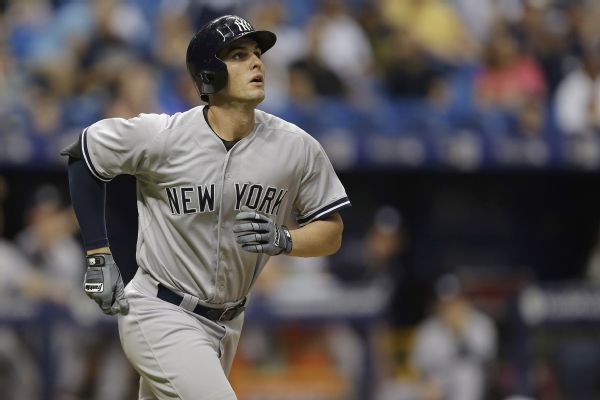 NEW YORK -- Injured New York Yankees first baseman Greg Bird said Sunday he's confident that by some point in May he will be back playing baseball again.

"Whether it's early May starting a rehab, I don't know exactly," said Bird, who is recovering from a recent ankle surgery. "And I don't know how long they'll be wanting me to rehab [in the minor leagues]."

Bird, 25, whose career has already been delayed by two other injuries with long recoveries, will begin the rehab process on Monday following a surgery late last month.

On March 27, Bird underwent a 10-minute procedure at the Hospital for Special Surgery in Manhattan to remove a coin-sized calcium deposit from his right ankle. He had played on the problematic bone spur for nearly all of spring training before the pain suddenly became too unbearable.

Ahead of a game just before the Yankees broke spring training camp, he told the organization he was having issues with the ankle. It was the first time that Yankees decision-makers had heard about the ankle bothering him this year.

That revelation preceded Saturday's news that third baseman Brandon Drury only disclosed to Yankees personnel this weekend that he was dealing with migraines and occasional blurred vision going back years.

"There's going to be times where a guy does try and fight through it, and that's part of it," manager Aaron Boone said. "Hopefully we continue to create and establish an environment where we can get out ahead of stuff as much as possible.

"We keep doing that by as best we can keeping the lines of communication open, and at the same time, not trying to take away one of our athletes' desire to compete and to fight and to grind through different situations that inevitably come up when you're an athlete."

Bird's latest problems stemmed from an injury the previous spring training when he fouled a pitch off his right foot. After trying to play through that injury, Bird needed surgery to remove a bone in his ankle/foot last July.

He returned to action about a month later, posting a .253 batting average and nine home runs.

Boone said Bird's return will depend on how the ankle -- which surgeon Dr. Martin O'Malley told Bird was "great" -- continues to progress. He also isn't sure what the rehab assignment will look like right now, but the fact Bird played through spring training means he likely will spend his time in the minors simply getting into baseball shape.

The manager is anxious to see what his lineup will look like with a healthier version of the first baseman, as injuries have defined the early part of his managerial tenure. Outfielders Aaron Hicks, Jacoby Ellsbury, Clint Frazier and Billy McKinney, pitcher CC Sabathia and Drury have already been hurt this season.