Greg Bird, Sonny Gray might be coming around for Yankees 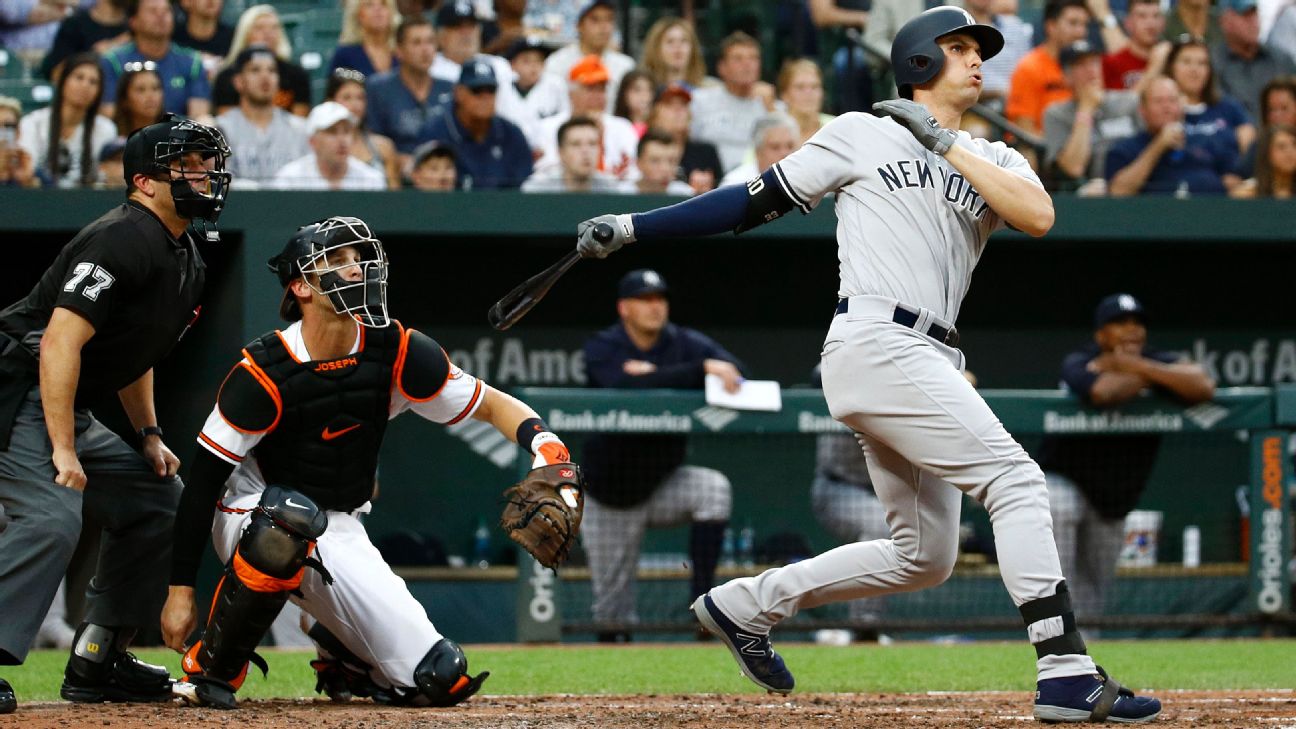 BALTIMORE -- Much of what New York Yankees manager Aaron Boone has been repeating about Greg Bird for the better part of a month and a half was on full display during the 20 pitches the New York Yankees first baseman saw early in Wednesday night's game at Camden Yards.

An 11-pitch Bird at-bat in the second inning preceded a nine-pitch sequence in the third. At the end of the latter plate appearance, the left-handed hitter delivered a booming blow with a grand slam that glanced off the right-field foul pole. The home run gave the Yankees a 5-0 lead they wouldn't relinquish in a 9-0 win over the Baltimore Orioles.

The timely hit aided a much-needed strong pitching performance from the rather up-and-down Sonny Grayand became just the latest in a series of big flies Bird has crushed of late.

"Felt like the at-bat quality has been OK all along," Boone said of Bird. "And I feel like it's gotten a lot better in the last week."

How much better has it been? Bird has at least one hit in seven of his past eight games. He's in the midst of a five-game hit streak and has homered in his past two games. He also became the first Yankee to post consecutive four-RBI performances since Alfonso Soriano did so in 2013.

Bird has finally started putting it all together at the plate. As the Yankees try to once again catch the surging Boston Red Sox in the American League East race, they'll need their first baseman and their sometimes strong starter Gray to have more games like Wednesday's.

"It's one start," Gray said to reporters. "It's something I told you guys [Tuesday]: I felt good coming into it, I feel even better coming out of it. It's one start to build on, and hopefully it can continue down this path."

On the heels of two starts in which he failed to get out of the third inning, Gray went six innings in the win over Baltimore, allowing just three hits and striking out eight.

"A big outing for him," Boone said.

It was only the third time this season that Gray has had at least eight strikeouts in a game, and it was just his second scoreless appearance, with the other coming in a two-hit, eight-inning effort June 6 at Toronto.

Gray found success by simplifying his game plan and getting back to the basics that made him a dominant pitcher before.

"Sometimes when things start escalating and things start kind of maybe swirling around and you're going through some things, it's important to get back to your strengths," Gray said. "My two-seam and my curve has always been something that I've been able to rely on throughout my career, going back to college and everything. To simplify things and go back to your strengths, that's all we tried to do."

All but six of Gray's 90 pitches were either his two-seam fastball or his curveball. He threw 45 curves and 39 two-seamers.

Yankees catcher Austin Romine echoed Gray in saying that the goal was to keep the curveball down in the strike zone as much as possible in hopes of getting Orioles hitters to chase. Romine said that happened and that Gray's curve was "probably the best I've seen it."

Much the same could be said of Bird's swing, which produced the big blow that gave Gray some early breathing room. Part of a five-run third, Bird's grand slam allowed Gray to ease into the rest of his outing.

Part of what has helped Bird pick up his pitchers offensively in recent nights has been the pleasure he has taken in some of the finer details of the work he has put in behind the scenes.

After spending the first few days of July under the Mendoza line, Bird's batting average has risen to .208 entering Thursday's series opener at Cleveland. He's starting to look a little more comfortable offensively after missing nearly the first two months of the season recovering from the ankle surgery he had late in spring training.

There's no telling just how much of a jolt a healthy and consistently hitting Bird can give the Yankees' offense.

"When he's right, we believe he's that on-base, power presence from the left side," Boone said. "Him playing well is a big deal for us. Hopefully we're starting to see him get a little bit settled in and have some impact for us."