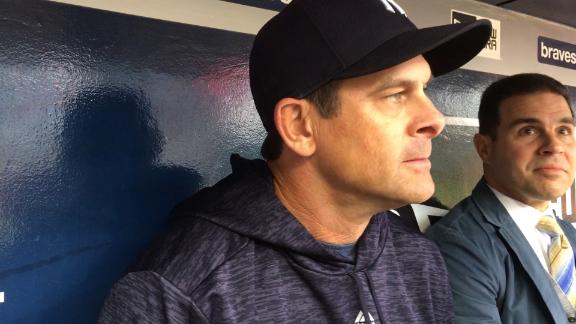 New York Yankees first baseman Greg Bird will miss six to eight weeks after he underwent surgery Tuesday to remove a small broken spur on the outside of his right ankle.

The surgery was performed by Dr. Martin O'Malley, a foot and ankle specialist, at the Hospital for Special Surgery in Manhattan. O'Malley also performed a surgery on Bird last summer that removed a separate problematic bone from his right ankle.

Bird was scratched from the starting lineup for a split-squad road game Saturday against Atlantabecause of inflammation in his right foot.CT and MRI exams showed no structural damage, but he returned to New York for further evaluation, leading to the broken spur diagnosis.

"Obviously, we were hoping that it was going to be a shorter-term thing," Yankees manager Aaron Boone said. "But we feel like we got some answers, we feel like we know what the surgery's going to accomplish, and we feel like the six-to-eight-week timeline should be workable. And hopefully, this is something that he'll now put behind him for good."

In a spring training game last March, Bird fouled a ball off his right ankle, and it is believed that injury set into motion this entire sequence. He played with pain the first month of the season before going on the disabled list May 2. When the injury did not improve, O'Malley operated July 18 to remove the os trigonum bone in the ankle.

If Bird's foot had been causing him problems this spring before Saturday's game, he didn't tell the Yankees.

"We didn't know anything," Boone said.

With Bird out, Tyler Austin and Neil Walker will get time at first base. The two will alternate at the position, primarily depending on opposing pitching matchups. Boone hasn't yet ruled out the possibility of Austin playing first on Opening Day. Before Boone addressed reporters Monday, he told Austin that he had made the Yankees' 25-man roster.

"It's unfortunate. It's not the way I wanted to make the team," Austin said. "You take the hand you're dealt. Hopefully, it doesn't take Bird too long to get back here, because he's a big part of this team."

Bird, 25, has been promising yet perplexing since his big league debut in 2015, when he came up from the minors and had 11 homers and 31 RBIs in 46 games.

In addition to the foot and ankle issues this past year, he missed 2016 after surgery to repair a torn labrum in his right shoulder. All of the injury issues have caused Bird some frustration in recent days, but Boone said he was "upbeat" after getting news that this surgery should offer some closure to the foot problem.

"He was really emotional the other day when he came out, when he was dealing with the pain. Because he knows, obviously, he hasn't gotten to put it together yet," Boone said. "And he understands in his mind what kind of player he is and what he thinks he can be. So there were a couple days of some real frustration: 'What's going on? What's the problem?'

"[On Monday], when I say he was upbeat -- because even though it's a setback in some ways -- he got some closure and feels like this could be the answer to the problem, even though it's going to cost him some weeks on the front end of the season."

ESPN's Coley Harvey and The Associated Press contributed to this report.