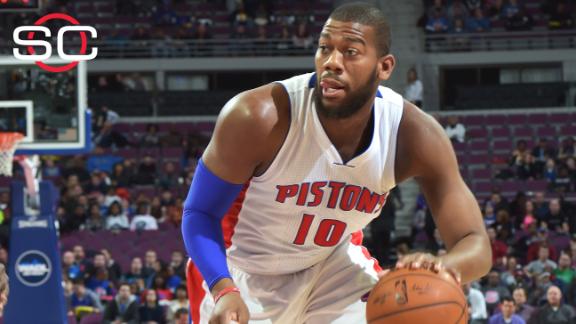 Monroe spurned the New York Knicks among other teams by agreeing to terms with the Bucks on a three-year maximum deal worth approximately $50 million with a player option for the final year, sources told ESPN.

Monroe, the 6-foot-11 big man out of Georgetown, was linked to the Knicks as a primary free-agent target because of his ability to score, rebound and pass and his potential fit in the triangle offense. Monroe's decision to join the Bucks is a blow for New York, which is looking to add more talent around star Carmelo Anthony.

Falk, Monroe's agent, said all four teams offered his client a maximum deal but Monroe chose the Bucks because he believes they have the best chance at making the playoffs immediately.

Monroe immediately gives the Bucks an offensive and rebounding presence inside.

According to ESPN Stats & Information, he was one of five players (along withDeMarcus Cousins, Anthony Davis, Pau Gasol and Zach Randolph) to average 15 points, 10 rebounds and two assists last season. Only three players (Kareem Abdul-Jabbar, Vin BakerandMarques Johnson) have done that in Bucks franchise history.

The Bucks' potential lineup, meanwhile, could be among the biggest in the league next season, with Carter-Williams the smallest of the projected starting five at 6-6.

The Bucks finished 41-41 last season, one year removed from winning just 15 games. In his first season as their head coach, Jason Kidd helped guide Milwaukee to the playoffs, falling in six games to the Chicago Bulls in the Eastern Conference first round.

The Bucks, who struggled to score at times in 2014-15, have been busy since that playoff loss. They traded Ersan Ilyasova to Detroit in a deal that brought back veteran point guard Greivis Vasquez, and agreed to terms to bring back Middleton on a five-year, $70 million deal earlier this week.

He entered free agency coming off a season in which he averaged a career-high 10.2 rebounds in 69 games. He averaged 15.9 points, 2.1 assists and 1.1 steals in his fifth season with the Pistons.

But a reunion in Detroit seemed unlikely, with Monroe recently telling the Baton Rouge (Louisiana) Advocate: "Stan (Van Gundy, Pistons coach) had smaller teams in Orlando years ago. [Andre Drummond] is like Dwight Howard. So Stan wants to put good players around him. The team has different plans and I respect that. I don't want to be anywhere I'm not wanted."

Monroe was suspended for the first two games of this past season without pay for pleading guilty to impaired driving stemming from a February 2014 incident.

Information from ESPN's Chris Broussard was used in this report.