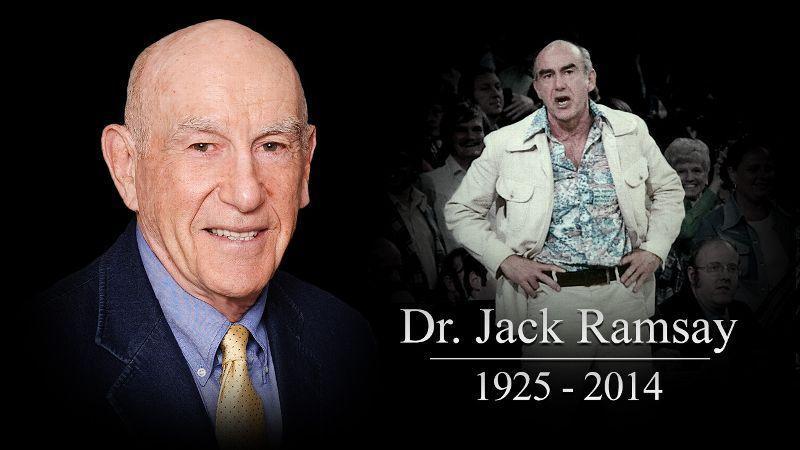 Jack Ramsay, a Hall of Fame coach who led the Portland Trail Blazers to the 1977 NBA championship before he became one of the NBA's most respected broadcasters, has died following a long battle with cancer. He was 89.

His family announced his death, saying he "led the greatest life that one could lead."

Ramsay was a longtime NBA analyst for ESPN and coached 20 seasons in the NBA, during which he emphasized fitness, selflessness, ball movement and skill -- qualities that carried his Portland team to the 1976-77 championship in his first season as coach of the team.

He has long been an icon in Portland, remembered as much for his distinctive 1970s fashion sense as for the city's only NBA title.

In his two decades as an NBA coach, Ramsay made the playoffs 16 times. He also won a title while serving as general manager of the Philadelphia 76ers in the 1966-67 season. Ramsay was inducted into the Naismith Memorial Basketball Hall of Fame in 1992.

Ramsay attributed many of his coaching philosophies to his time in the Navy during World War II, when he worked in underwater demolition, the forerunner of today's Navy Seals. He wrote about the experience on ESPN.com in 2011.

"I learned how important physical conditioning is. I learned how to focus on an objective in spite of all kinds of hazards. I learned how to deal with stress, too," he wrote. "If you make a wrong move with explosives, it could be deadly. If you're there when they blow up the beach, you get blown up, too. So you need to get your job done correctly ... then pull the fuse with enough lag time for you to clear the area completely and get picked up by the small boats.

"I also learned that my connection with my team members was best handled by being in there with them."

Ramsay was diagnosed with melanoma in 2004 and later battled growths and tumors that spread to his legs, lungs and brain. He also fought prostate cancer and most recently a marrow syndrome.

His affinity for fitness never wavered, though. Ramsay, who competed in at least 20 triathlons in his lifetime, worked out regularly into his 80s, even as he battled the various forms of cancer that he was stricken with. He often spoke of his love of swimming in the Gulf of Mexico near his home in Naples, Fla., or jogging in a pool or from wall to wall in his hotel room when he was traveling on NBA assignments.

"He's probably forgotten more about the game than I know," Miami Heat president Pat Riley once said of Ramsay, whom he counted as a close friend.

"Jack's life is a beacon which guides us all," Bill Walton, who was on Ramsay's 1977 title team in Portland, told USA Today in 2007. "He is our moral compass, our spiritual inspiration. He represents the conquest of substance over hype. He is a true saint of circumstance."

Ramsay spent several years late in life caring for his wife, Jean, who was diagnosed in 2001 with Alzheimer's disease. She died in January 2010.

John T. Ramsay was born in 1925 and attended high school in Upper Darby (outside Philadelphia) and college at St. Joseph's. He earned a doctorate in education from the University of Pennsylvania in 1949, explaining the "Dr. Jack" moniker that most players and fans simply knew him by.

After the Navy, and coaching at St. Joseph's, he coached the 76ers, Buffalo Braves, Blazers and Pacers.

"They talk about the Lakers (being) 'Showtime,' but we were 'Showtime' in Buffalo with Jack," Hall of Famer Bob McAdoo said in a statement. "He was so much into the physical fitness and that's why we were so successful. It was very fun playing for him.

"Jack introduced me to the Hall of Fame. He gave me a fabulous tribute. When I heard about (his passing) this morning, I just felt so sad. He gave me my start in my career. He jumpstarted my career. When he came back and got the job announcing here in Miami, it was like a homecoming for us."

My thoughts and prayers go out to the Ramsay family... Thank you for believing in a skinny kid from Riverside CA in '87.. Great friend

When he left the Pacers, Ramsay carefully did not use the word "retire" and began working as a television analyst on 76ers games. Eventually, he worked on Heat television broadcasts for eight seasons before moving full time to ESPN for radio and TV commentating before the 2000-01 season.

So sad to hear of Dr.Jack Ramsay passing. Class, grace, loyalty, brilliance and heart barely begin to describe him. Prayers to his family.

Prayers go out to Dr. Jack Ramsay's family. He will be missed for he is the true meaning of a Trailblazer!

- Lamarcus Aldridge (@aldridge_12) April 28, 2014"The entire ESPN family is saddened by the loss of our beloved NBA analyst Dr. Jack Ramsay," ESPN president John Skipper said in a statement. "It was our great pleasure to work with Dr. Jack, and his energy and zest for life resonated in all that he did. He leaves an amazing legacy of helping fans understand and appreciate the game he loved."

The funeral is scheduled for Thursday morning in Naples. 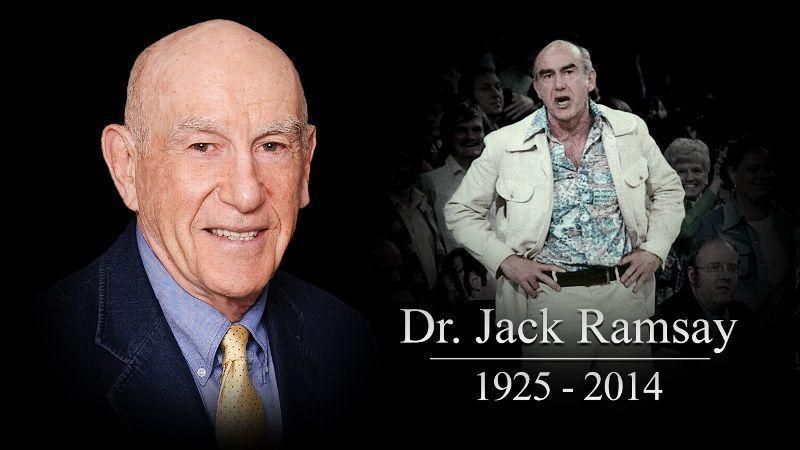