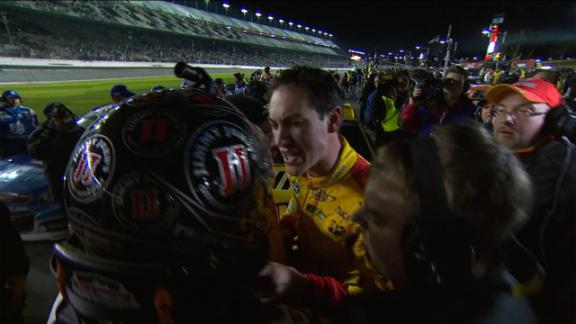 ESPN
By Bob Pockrass
DAYTONA BEACH, Fla. -- Kevin Harvick and Joey Logano traded heated words following the Sprint Unlimited after Logano got into the back of Harvick's No. 4 car with two laps remaining.

The two drivers have a history dating back to 2010 and an infamous incident in Pocono Raceway, and Saturday night they were nose to nose (Harvick still having his helmet on) after they had gotten out of their cars following the 75-lap exhibition event at Daytona International Speedway. At one point, Logano appeared to lunge toward Harvick before they were separated and returned to their cars.

"He's just Kevin," Logano said. "He's an instigator, right? It's the same thing he is every other time he talks to someone. It's the same old crap. It just happens all the time. It's no big deal."

Harvick, who was critical of Logano's blocking moves at Talladega in October, which he believed helped Logano teammate Brad Keselowski win the race, was upset because he felt Logano's move was silly.

"He thinks he was helping, but you can't just drive somebody straight in the corner into the fence," said Harvick, the 2014 Sprint Cup champion. "He kind of did the same thing to me at Talladega. I told him, 'The karma train is coming after you.' And it bit him right in the [butt]. ... I just didn't appreciate just getting straight drove into the wall."

"I don't know," Logano said. "It's just the same old stuff with him. I just was trying to work our way up there and had a good run down the backstretch pushing him and once he got into the corner, his car got tight.

"He's got a lot of damage on his car. That could have been why, too. ... It's unfortunate he got in the fence. [It was] not on purpose. Just trying to race to the front. All-star races like this really don't mean anything unless you win, so go for it."

Harvick said it being an exhibition event doesn't mean the Penske driver should just try anything.

"It is one of those deals where you just know that is not going to work," Harvick said. "Whether it's an all-star race or not, it doesn't really matter. You can't just take your head off and throw it on the floorboard and not use your brain."

Harvick, Logano Have Words After Race
Kevin Harvick and Joey Logano discuss the issues they had with each other after the Sprint Unlimited at Daytona.

Kenseth: 'Felt Like I Was In Days Of Thunder'
Marty Smith speaks with Matt Kenseth about his win in the wreck-filled Sprint Unlimited and what it means for Kenseth looking to win his third Daytona 500 next Sunday.
Related topics:
sportsespnjoey loganokevin harvicknascarsprint unlimiteddaytonasprint cup
Copyright © 2020 ESPN Internet Ventures. All rights reserved.
More Videos
From CNN Newsource affiliates
TOP STORIES

7 On Your Side Investigates coronavirus and race; Zip code check
How the coronavirus pandemic is impacting mental health
Over 800 more cases in Connecticut; death toll reaches 277
Some states more successful than others at staying home, data shows
'If I did it, you can do it:' LI woman, 90, beats coronavirus
Show More
Death toll tops 1,200 in NJ; Parks ordered closed
How do we restart life after coronavirus?
'We are not there yet,' NYC mayor says, but also sees hope
How international travel left NY vulnerable to coronavirus
Earl Graves Sr., founder of Black Enterprise magazine, dies
More TOP STORIES News