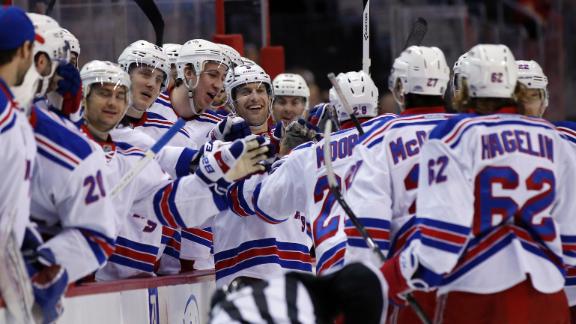 The playoffs are here, and there are plenty of storylines to follow as the toughest postseason tournament in pro sports gets under way. Here are seven of the biggest.

It is often said, and accurately so, that the playoffs are as much about attrition as the actual level of play. Think about what was left of the Boston Bruins, specifically Patrice Bergeron, at the end of the 2013 Stanley Cup finals: some jerseys and a bunch of gauze.


It is the same every year. And it's not just what happens during the playoffs but the health of teams as they enter the postseason. How different would the Pittsburgh Penguins look with Kris Letang in the lineup? Instead, he appears to be lost for the season, along with fellow defenseman Olli Maatta and Pascal Dupuis. Another Pens defenseman, Christian Ehrhoff, is also banged up, further diminishing the Pens' hopes.


Max Pacioretty is an unknown for the Montreal Canadiens, and losing him for any extended period of time could tip the scales in what should be a very tight series with the Ottawa Senators. Solid New York Islanders defenseman Travis Hamonic might not be available for the start of the series against the Washington Capitals, and his absence could affect the team's ability to contain Alexander Ovechkin and Nicklas Backstrom.


On the flip side, Patrick Kane of the Chicago Blackhawks is well ahead of schedule in recovering from a broken clavicle and will play in Game 1 against the Nashville Predators. That's bad news for the Preds, who have home-ice advantage but seemingly little else going for them after slumping their way into the postseason. Will goalie Ryan Miller be in game form in time to make a difference for the Vancouver Canucks against the Calgary Flames?


The bottom line is that the teams that enter the postseason the healthiest, and stay that way the longest, give themselves the absolute best shot of surviving late into the spring and perhaps winning it all.

The playoff grid is awash in "ehs" and "aboots" and "chesterfields," and maybe the odd "bloody Caesar," as the Canadian content (or CanCon, as it is known north of the border) is through the roof. Three Canadian teams in the Western Conference -- Calgary, Vancouver and the Winnipeg Jets -- and two more in the East -- Montreal and Ottawa -- give this playoff season a distinctly Canuck-ian feel.


At least two will be gone in the first round, with Vancouver and Calgary set to tangle in an old Smythe Division throwdown, and Ottawa and Montreal will renew acquaintances after an emotional series two years ago. Is there one among the group that could end the Great White North's Cup drought? Montreal looks to be that team, and wouldn't it be fitting if Carey Price, the best goaltender on the planet, delivered the Habs' first Cup since Patrick Roy and the Canadiens delivered glory in 1993? Of course, the Senators do have the aura of destiny about them.

Goaltending is always a top storyline in the playoffs, but it's hard to think of another playoff season opening with so much uncertainty in goal. Frederik Andersen will get the nod over John Gibson for the Anaheim Ducks, but both might be pressed into service before their series against the Jets is over. Jake Allen stole away the starting job from Brian Elliott and carries the St. Louis Blues' significant playoff hopes on his rookie shoulders, knowing that even a slight stumble likely will mean the hook for him.


Petr Mrazek is also facing down his first playoff start for the Detroit Red Wings, having supplanted Jimmy Howard as the man at the other end of the ice from the Tampa Bay Lightning's Ben Bishop. What will happen in Vancouver, where Eddie Lack has become the man in Miller's absence? Is there a playoff hero in waiting among these young and/or inexperienced netminders, or just a lot of turmoil?


More about the kids, all right?

Goaltenders don't have a monopoly on youthful expectation. You have to figure Calgary's Johnny Gaudreau, Ottawa's Mark Stone and Nashville's Filip Forsberg are going to be key players in the race for the Calder Trophy, and all three played a significant role in helping their teams get to the postseason. Can they continue their production now that the playoffs have arrived? It's not a stretch to suggest that all three teams will have a difficult time advancing if they don't. Other youngsters to watch include Vladislav Namestnikov and Jonathan Drouin in Tampa, Kevin Hayes with the New York Rangers, and Teuvo Teravainen of the Blackhawks.

We know there will be controversial calls and non-calls as the playoffs roll along, but here's hoping calls made in the first period of the first games are also called in overtime and in every other game until the Cup is hoisted in mid-June. Sadly, that's not always how it happens, with the hold or hook whistled early in games and early in series somehow going uncalled as games become more meaningful. We're not asking for perfection, just consistency every referee, linesman, coach and player is surely looking for, too.

Home ice has meant sweet bubkes in recent years. The Los Angeles Kings lifted the Cup three years ago as the No. 8 seed, and won it all last season while taking Game 7s on the road in San Jose, Anaheim and Chicago. The Rangers beat Pittsburgh in Game 7 at the Consol Energy Center last season, the third time the Pens have lost a seventh game at home since their 2009 Cup run (Montreal in '10 and Tampa in '11 also did the deed).


Minnesota beat Colorado at the Pepsi Center in Game 7 to steal an opening-round series last season, and Montreal dealt a similar blow to Boston at TD Garden. Other teams that had home ice but took a knee included St. Louis and Tampa Bay, which was swept despite starting the series against Montreal at home. So, will we see anything resembling home cooking this spring? We'll go out on a limb and say yes.


Some seats are quite hot

We've talked about players who are under pressure this spring, but what about coaches and/or general managers? Last spring, we saw coach Dan Bylsma and GM Ray Shero pay the price after the Penguins coughed up a 3-1 series lead against the Rangers. You have to believe that the Ducks, winners of three straight Pacific Division titles, must show well this spring for coach Bruce Boudreau's sake.


What about Ken Hitchcock in St. Louis? Despite having strong teams the past three seasons, the Blues have been dispatched twice in the first round and once in the second. It's worth noting those losses came against the Kings (twice) and Blackhawks, but they were disappointing nonetheless. The Blues once again boast a strong, Cup-worthy lineup, and we can't imagine another early exit will be looked on favorably by ownership or management.


One also wonders how things will go for Jack Capuano if the Islanders fold against Washington, especially with the team's poor play down the stretch and a move to Brooklyn coming next season. It's not just players playing for contracts and their future but coaches and GMs, too.