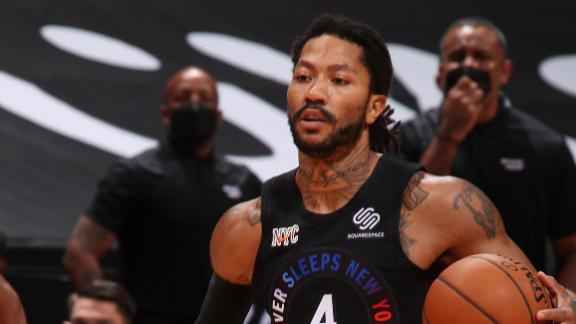 MIAMI -- - A Heat-Knicks game, down to the wire, just like old times.

Jimmy Butler and Bam Adebayo made sure it wouldn't get away from Miami.


The duo did all of Miami's scoring for much of the second half, Butler finishing with a game-high 26 points, and the Heat beat New York 98-96 on Tuesday night to finish off a sweep of a home-and-home series.

"This was more of a throwback Miami Heat-New York Knicks game from the '90s, where there weren't a lot of open shots in the last 14, 16 minutes of the game," Heat coach Erik Spoelstra said. "You were just going to have to grind out a win."

RJ Barrett had a chance to tie it on the final play, but his layup bounced off the rim and Miami won three straight for the first time this season. Kelly Olynyk scored 20 points for Miami, Adebayo had 19 and Tyler Herro finished with 15 - including the 3-pointer with 1:04 left that put Miami up for good.

The Knicks scored 14 points in the fourth quarter, and went to the line 16 times in the game - compared with 39 for Miami. The difference in free-throw attempts was 13-2 in the fourth, and Knicks coach Tom Thibodeau noticed.

"I want to look at the film," Thibodeau said. "It just seemed a little strange to me in terms of ... I'll leave it at that."

Elfrid Payton led the Knicks with 18 points, and Derrick Rose - in his first game back with New York - had 14 off the bench. Barrett scored 13 and Julius Randle finished with 12 for New York.

Herro scored Miami's final basket of the first half, a layup with 30 seconds left.

For the next 18 1/2 minutes of game time, Butler and Adebayo would be the only Heat players to score. They combined for all 19 Miami points of the third quarter and the first eight of the fourth, before Herro hit a jumper with 6:06 remaining.

"We're figuring this thing out, slowly but surely," Butler said.

New York: Frank Ntilikina missed the game because of a contact-tracing issue, Thibodeau said. ... This was New York's lone regular-season visit to Miami this season. The Knicks will play host to the Heat once in the NBA's second half, sometime between mid-March and mid-May.

Miami: Goran Dragic (ankle) remained out. ... The Heat start a seven-game Western Conference trip Thursday in Houston. ... Butler made a 3-pointer in the third quarter, his first of the season in 15 tries and his first in Miami's home building since March 2.


Miami made 12 2-pointers, the fewest in franchise history. The Heat made only four in the first half, two fewer than the previous low in the NBA this season. The last time a team had fewer 2-pointers in a first half was Oct. 27, 2018, when Atlanta made three against Chicago. The record for fewest 2s in a full game since the shot-clock era began is seven, by Washington last season - against Miami.

Rose has now played three games as an opponent at AmericanAirlines Arena this season - two last month with Detroit, one with the Knicks. Such a quirk happens about twice a year on average; James Ennis (Philadelphia and Orlando) did it last year. Jason Collins and Jason Kidd (both in the 2003-04 and 2007-08 seasons) have done it twice since Miami moved into its current building in January 2000.