Hinting at how dominant they can become, Yankees soar past Astros 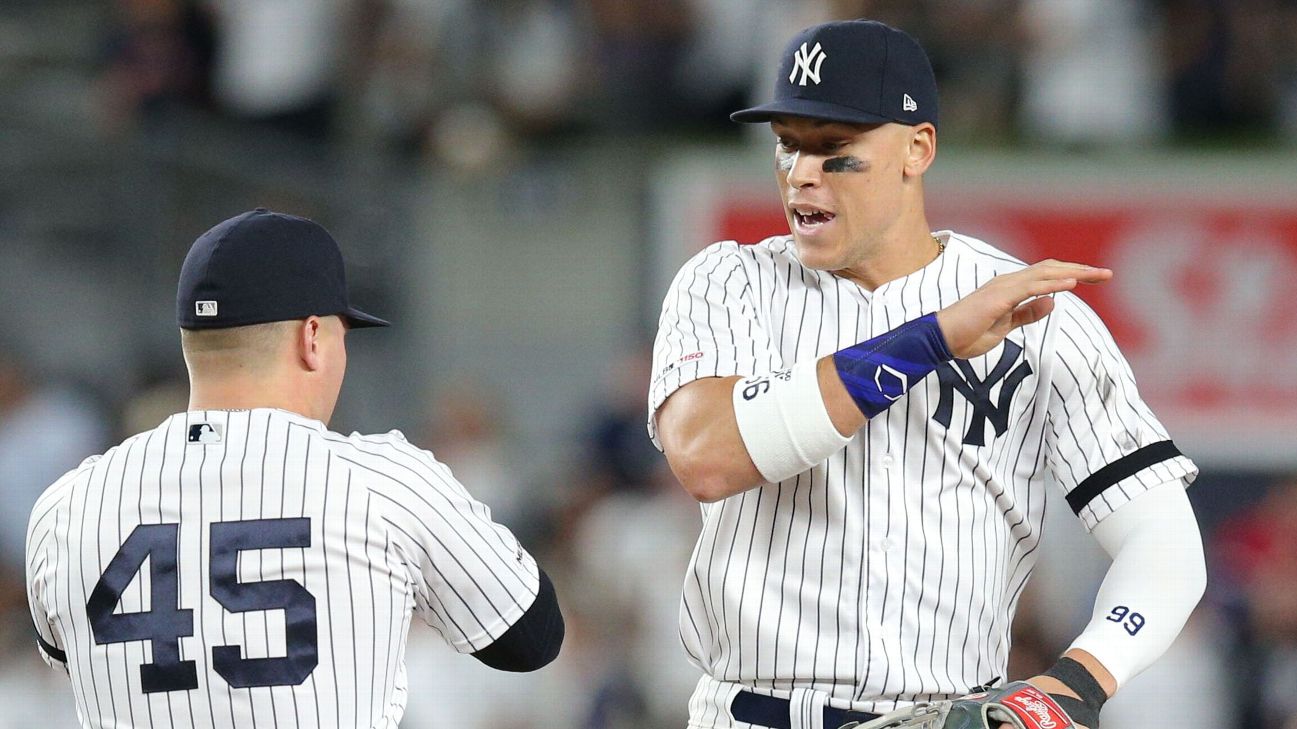 ESPN
By Coley Harvey
NEW YORK -- Yes, it's only June, but Saturday night at Yankee Stadium,it seemed like so much later in the year than that. There was a palpable buzz, an evident energy and a discernible electricity that made the game between division-leading foes Houston and New York feel as if there was much more on the line than just one regular-season game.

It was precisely the kind of game, midseason or not, the New York Yankees are continually looking to snatch in hopes of expanding their ever-widening lead in the American League East. With a prime-time, two-game set in London against the rival Boston Red Sox and a key road series against the Tampa Bay Rayslooming, they will have plenty of other chances to do so.

It would appear so after the way the Bronx Bombers pulled out a 7-5 win Saturday over the visiting Houston Astros in a tense, back-and-forth contest. Eight straight wins -- six coming against two teams with a combined .597 winning percentage entering Saturday -- is a clear indication of that, too.

"This is a confident group," first baseman Luke Voit said. "Everybody in this locker room expects the best out of us every night, and it doesn't matter who does it. Everyone has that next-man-up mentality to get the job done."

Most of the 46,034 fans Saturday were transfixed by a close game that had everything -- four lead changes and a quartet of game-altering home runs, but also some stellar starting pitching, a no-hitter going into the fifth inning and enough web gems to stock SportsCenter between now and the All-Star break. But at least one other creature was, too. A hawk perched on the left-field foul pole early in the game, taking in the action without budging until after fans had cleared out of the stadium. Maybe it was on the hunt, but the bird looked so locked into what was happening on the field that it didn't want to leave. Given the way this game went, you couldn't blame it.

In Sunday's series finale with the Astros, the Yankees will be going for their second straight series sweep. Get it, and they would have snatched seven games in a row from Houston and Tampa Bay, two teams that have spent much of the year among the league's best. It's not a bad thing, riding this wave into those two division matchups.

"These are fun games to be a part of, because you know you're up against a really good team, and you can feel that when you're playing them, even though they're going through a little tough time," Yankees manager Aaron Boone said, referring to the seven-game losing streak the banged-up Astros are in the middle of. "Obviously they've got a couple of key guys out, but you can feel their capability. Every at-bat's a grind. They make you work.

"It's nice to win these when you know you have to play well, but don't look much further than that."

Ah yes, it is only June, after all. Still, these confidence-boosting wins are the kind that can have some kind of residual impact later in the year when the games arguably matter a little more. Perhaps by then, the Yankees' lineup will be fully operational. They aren't quite at that point since they are still currently missing a couple of starting pitchers and have at least one hole in their bullpen. But after two key returns from the injured list this week, and with one recent acquisition via trade, this group is getting hot in a way few other teams can. They're now 22 games over .500.

"This is a fun team, and I can't wait to see what this summer is going to be like," Voit said.

In terms of this latest win, the fingerprints of both recently returned post-IL position players was all over it. Giancarlo Stanton, who had been out since April 1 due to a series of injuries (first his left biceps, then his left shoulder, then his left calf), finally got his first RBIs of the season in this game, finishing with four.

Two of the runs Stanton drove in were the product of a hustling Aaron Judge, who smartly took the extra base when he scored from second on a pair of singles that Stanton nicked off third basemanYuli Gurriel's glove with high-velocity grounders. Like Stanton, Judge came back this week following a two-month IL stint because of an oblique injury. Finally, the Yankees' big boys both had key contributions in the same game.

Both balls Stanton hit toward Gurriel in the sixth and seventh innings had exit velocities of more than 104 mph.

"Tried to get in the air, but whatever. Get it on the barrel," Stanton said. "It was good to contribute to a win, finally."

Stanton hit the first ground ball so hard that he saw it hit Gurriel's glove before he even got two steps out of the batter's box.

Boone, who seems to have heard the criticisms some Yankees fans have had of Stanton at times the past two seasons, was quick to remind everyone about his outfielder's hitting prowess. He was particularly pleased with Stanton's seventh-inning at-bat in which he worked a 2-1 count versus Astros reliever Ryan Presslybefore his scorcher off a fastball.

"Pressly, that's about as tough a draw as you're going to have right there, and to get into a really good count and smoke a ball, big at-bats by [Stanton], and I hope everyone takes notice of that," Boone said. "Sometimes we forget what a good player he is. Hope they saw those at-bats."

Stanton's teammates came to his defense, too. Earlier in the week, after striking out for the second time in a home game following his return, Stanton heard boos.

"You got to give the guy a break. He's played like what, five games?" Voit said. "I know he's probably feeling like he ... coming back from a shoulder he might be a little stiff, doesn't feel right. But just getting those reps and he won an MVP for a reason."

Along with those key hits, the Yankees also got home runs from Gio Urshela and Austin Romine to push their homer-hitting streak to 25 games, tying them with the 1941 Yankees for the most consecutive games with a homer in franchise history. They are now two games shy of the major league record.

It was Romine's solo shot in the seventh that tied the score 5-5 before Stanton, just four batters later, shot the second of his hard-hit grounders off Gurriel.

"For Ro and Urshela to be the two guys hitting home runs for us is awesome," Voit said. "The bottom of the lineup picking up."

Sterling defense, namely from Voit, Urshela, Stanton and Judge allowed starter Masahiro Tanaka to exit the game after six innings having given up only two runs despite inducing just two swing-and-misses. In his previous outing against the Rays, Tanaka tossed a two-hit shutout, in which he induced 23 whiffs.

To be as effective as he was Saturday, Tanaka needed Voit to kick off the fifth inning with a diving stop to his left. Had the ball gotten by Voit, it would've certainly been a leadoff double. A batter later, Voit had another stellar snag, catching a pop up along the railing near the first-base camera well.

"Just a credit to me getting out there and attacking my defense like my offense," Voit said. "Now I'm getting to those balls that I wasn't, and making big plays. That was kind of a thing that I never took so much pride in. Now, even if I don't have a good game, I'm trying to find the positives in my defense, too."

Later, Urshela ranged to his left on a tough grounder, Stanton jumped in front of the wall in left to haul in a well-struck fly ball, and Judge nabbed a greedy Max Stassi with a throw to second base from the right-field corner. Stassi thought he could get the extra base on Judge's elite arm.

Added Tanaka, through an interpreter: "Just looking at how the ball was going toward second base I knew that we had a good chance of getting him out."

Between their defense, quality at-bats and at-long-last contributions from both the meat of their lineup and the bottom, the Yankees' win Saturday was a microcosm of what they'll need during some of their tougher games later in the year. It was also the kind of win they feel as if they've been putting together often recently, healthy or not.

"[We] just keep pounding," Stanton said. "A day like today, we get no-hit for five innings, and no stress, just keep pushing the envelope and having tough at-bats." 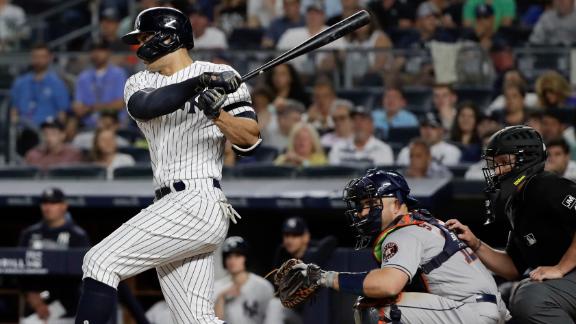