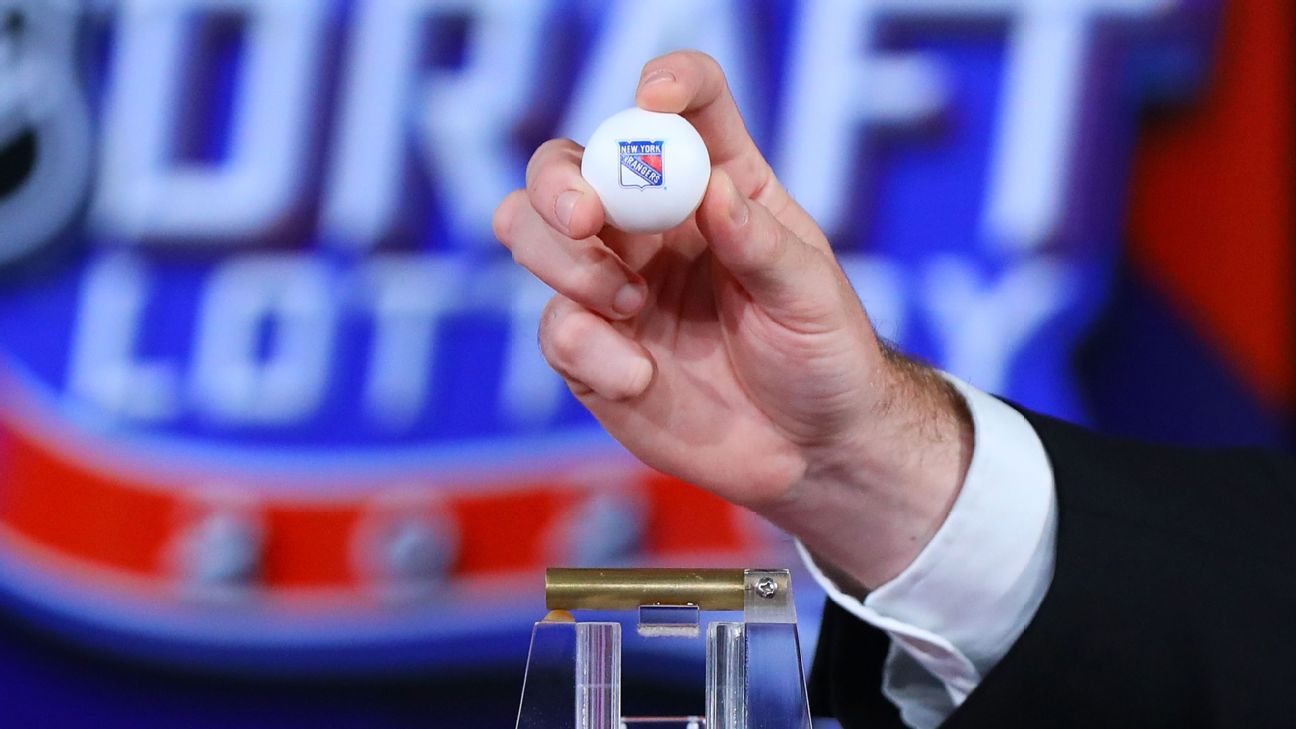 The New York Rangers won the second lottery for the 2020 NHL draft, which determined which team would have the opportunity to pick at No. 1 overall. That first selection is widely expected to be phenom Alexis Lafreniere of Rimouski Oceanic in the Quebec Major Junior Hockey League.

In June, a placeholder won the first lottery, which means that one of the eight teams eliminated from the playoffs via the qualification play-in round would have the honor of drafting first overall. The Rangers were swept by the Carolina Hurricanes3-0. This will be the second straight year in which the Rangers pick in the top two; they took Kaapo Kakko at No. 2 in 2019.


Our NHL team is here to sort out what it all means for Lafreniere, the Rangers and the rest of the NHL.

On a scale of 1-10, rate the ridiculousness of the Rangers' landing the No. 1 pick.

Greg Wyshynski: I'll go 3 for the appropriateness of the Rangers' winning and 10 for how ridiculous it was. The Rangers were a non-playoff team with a .564 points percentage when the season was paused in March, and they were dragged into the postseason when the NHL expanded it to 24 teams. They're in the midst of a rebuild -- and a respectable one at that: Two years after a letter to fans explained that hard times were ahead, they're already trending back up.

This lottery became utterly ridiculous the moment the Rangers' ball was prematurely dropped into the machine's tube by its handler, leading everyone to say, 'Huh, it'd be hilarious if the Rangers won,' right up until they actually did. But please don't malign this person for ruining the surprise: Could you imagine the frostbite he was getting while holding that ball? (Just jokes, people. If the NHL actually had the ability to rig a lottery, Connor McDavid would be a Maple Leaf or a Flyer.)

Emily Kaplan: The full disclaimer here is that I grew up a Rangers fan. Young Emily would rate this as a 1 (she also, at one point, thought Wade Redden would lead New York to a Stanley Cup, so take that opinion as you will).

A neutral observer's take: This is probably a 5. There's always a perception that though the league is obsessed with expanding into different markets, it still favors its marquee teams. It isn't good for the NHL when the Rangers aren't relevant. New York also lucked into a lottery spot at No. 2 last year. That said, out of the eight eligible teams, the Rangers were pretty worthy.

The team that should be most disappointed about losing out on Lafreniere is _______.

Kaplan: The Minnesota Wild. I feel for the roster Bill Guerin inherited; the Wild are old and slow. "There definitely have to be changes," Guerin said earlier Monday. He also said that not only is there no true No. 1 center on the roster, but also he doesn't think there's one in the entire organizational system. Not ideal! Plus, the Wild have never selected higher than No. 3 overall. But Guerin did something his two predecessors didn't when he signed prized prospect Kirill Kaprizov from Russia. Kaprizov will inject the Wild with some youth next year. I just wish he had a wingman with whom to come in.


Wyshynski: The Toronto Maple Leafs. Granted, the Leafs shouldn't have had a shot at winning the first overall pick as the No. 3 seed in the Atlantic Division. But when the NHL wanted to hold the draft before the season restart, the general managers whined about the possibility of one team winning the top pick and the Stanley Cup in the same season. This was the system created to appease them, and this is why four playoff-bound teams had a shot to win the lottery. In the Leafs' case, they're a capped-out team looking at a flat salary cap for at least the next two seasons. Lafreniere would have been a godsend, in terms of both impact and cheap labor.

Instead, the Leafs lose out on the first overall pick and have to hand their first-round pick (13th overall) to the Hurricanes, having used it to dump Patrick Marleau's contract last summer. GM Kyle Dubas has had better weeks.

Complete this sentence: "Thank the hockey gods that _____ didn't win the lottery."

Wyshynski: The Winnipeg Jets. Don't get me wrong: They're a deserving team and one that would have missed the playoffs with a .563 points percentage in a traditional 16-team postseason. But if I could be a little selfish here, as an American NHL fan: Canadian teams have vacuumed up Connor McDavid (Oilers), Leon Draisaitl (Oilers), Auston Matthews (Leafs), Patrik Laine (Jets), Matthew Tkachuk (Flames), Elias Pettersson (Canucks) and Quinn Hughes (Canucks). These are some of the most exciting young players in the world, all cloistered north of the border. I'm not usually a supporter of the "[Player X] belongs in a place like New York!" notion, but yeah, Lafreniere belonged in a place such as New York.

Kaplan: The Edmonton Oilers. I just don't think I could stomach it. They had four first overall picks from 2010 to 2015. Four! Sure, McDavid and Draisaitl could use some scoring help, but when your franchise gets that many chances to draft first and still does silly things such as trading one of them for a depth defenseman, you need a timeout.

Which team that advanced out of the qualification round is regretting not getting a shot at Alexis Lafreniere right now?

Kaplan: The Montreal Canadiens. (The answer also could be the Montreal media, who would have killed to finally see a Quebecois star of Quebec's team). The Habs of course are happy to be included in the playoffs, but they have no business being there, as the 24th-best team when the season was paused. Plus, though their qualification series win against Pittsburgh was inspiring, it showed that this team has great defensive buy-in but could use some skill to build around. The Canadiens do have Nick Suzuki and Cole Caufield in the pipeline, so they can't be too salty.

Wyshynski: The Arizona Coyotes. Yes, it's awesome that they pulled off an upset and advanced in the playoffs for the first time since 2012. (Praise to Darcy Kuemper for that). But here's another drought they could have broken this summer: earning the first overall pick in the NHL draft for the first time since relocating to Arizona and for the first time as a franchise since 1981, when the original Winnipeg Jets selected Dale Hawerchuk. The Coyotes are in a perpetual battle for popularity, relevance and, more specifically, a new arena. Having a foundational offensive talent such as Lafreniere to build around would have been a coup. Heck, it might even have convinced Taylor Hall to stick around, too.

Where does Lafreniere fit with the Rangers?

Kaplan:He fits quite nicely in the middle six -- and let there be no mistake: The expectation is that Lafreniere will be in the opening day lineup and spend the entire season with the big club. (Also, because of CHL rules, he would not be eligible to play in the AHL full-time). This Rangers coaching staff already has the blueprint for how to ease a teenage rookie into the lineup, as they did it this past year with Kakko. Like Kakko, Lafreniere comes in with great fanfare, and by virtue of being one selection higher, he has much more hype.

Lafreniere averaged 2.15 points per game with his junior team last season (the CHL's highest average since McDavid) and was a World Juniors Championships MVP. He might have some of the same growing pains adjusting to the NHL. For Kakko, it was going from European to North American ice. For Lafreniere, it'll be going from being the biggest and most talented guy on the ice every night to being one of many big, talented guys on the ice. On the Rangers, Lafreniere is surrounded by a good young core. Artemi Panarin is the centerpiece, andMika Zibanejad, Kakko, Pavel Buchnevich, Jacob Trouba, Adam Fox and Igor Shesterkin are all 27 or under. The end to the rebuild is in sight, and the window opening is quite bright.

Wyshynski: It does, but not dramatically. Lafreniere joins a Rangers team that is blessed with talent up front, from established stars such as Panarin, Zibanejad and Chris Kreider to the next generation of standouts such as Kakko and Filip Chytil. Having him on a rookie deal under a flat salary cap the next two seasons is a source of envy for other clubs and will enable the Rangers to be aggressive in trying to acquire veteran help at center and on defense.

But this is a team building smartly back into Cup contender shape. The Rangers were already ahead of schedule as an offensive team. Now they're even better. One question, however: Does GM Jeff Gorton maybe regret handing Kreider that full no-move for the first four seasons of his seven-year extension now that he has Panarin and Lafreniere on the left side?