How the Rooney Rule succeeds ... and where it falls short 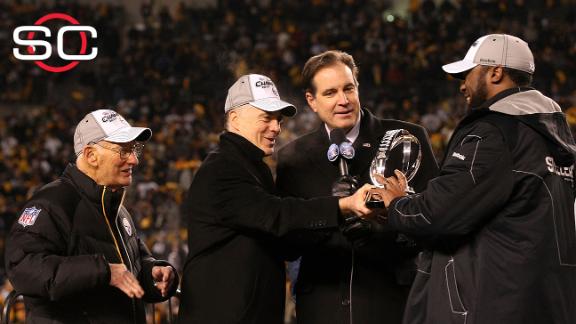 "I've never interviewed anybody as good as that," Reid said.

So after the Kansas City Chiefs, for whom Reid and Culley now work, beat Arizona in Week 14 last December, Culley found Bowles in the postgame scrum. Culley knew Bowles would be a hot head-coaching candidate when the calendar turned. In the previous five years, Bowles had interviewed for six head-coaching jobs. The knock on him, fair or not, was that he didn't interview well.

"I told him, 'Whatever you do during these head-coaching interviews you're about to go on, don't forget what you did with Andy, because Andy doesn't throw around those superlatives like that. Whatever you did then, do it to these other guys.' And, he did," Culley said.

That it took the 51-year-old Bowles, a respected defensive mind known for his creative schemes and ability to connect with players, what he called "nine, maybe 10" tries to become a head coach in the National Football League is evidence to some that the Rooney Rule is flawed. Implemented in 2003, the rule requires teams to interview at least one minority candidate for every head-coaching vacancy.

Some minority coaches feel like they are granted interviews for jobs only to fulfill the Rooney Rule requirement. Others, such as Bowles, embrace the opportunity to refine their interviewing skills and get their name out for future consideration.

Could the NFL do better? Absolutely. But the rule has made a positive impact. After interviewing with four teams this offseason, Bowles is now the head coach of the New York Jets.

Asked if he felt he had a legitimate shot each time he interviewed, Bowles smiled and said, "You'd like to think you did."

In 1989, three years after his playing career ended, Herm Edwards got an internship with the Kansas City Chiefs through a minority fellowship program started by former San Francisco 49ers coach Bill Walsh. One of the game's great innovators, Walsh recognized the value of diversity on his staff, and he worked to support young minority coaches so they could grow into coordinators and, possibly, head coaches.

That's because in October 1989, Oakland Raiders owner Al Davis fired coach Mike Shanahan and promoted Art Shell from offensive line coach to head coach. Until then, the NFL had not had an African-American head coach in its modern era.

Shell's ascent opened the door for others. The Minnesota Vikings hired Dennis Green in 1992. The Philadelphia Eagles hired Ray Rhodes in 1995. The Tampa Bay Buccaneers hired Tony Dungy in 1996. The Jets hired Edwards in 2001.

But after the 2001 season, both Green and Dungy were fired -- Green after his first losing season in 10 years with the Vikings and Dungy after a winning season with the Buccaneers but no Super Bowl. Famed O.J. Simpson attorney Johnnie Cochran and labor law attorney Cyrus Mehri commissioned a comprehensive report, published in 2002, that detailed the dismal record of minority hiring in the NFL.

"If you were a potential black head coach or a potential coordinator, the problem you ran into is they would release it to the press that you were on their list of potential guys, but you didn't get an interview," Edwards said. "If you got one, it was over the phone.

"It almost became one of those deals where [people would say] why didn't he get a job? So it almost served as a detriment. It was almost self-serving for the clubs to say, 'We got in contact with him,' got it to the press. Tony [Dungy] ran into that early. Teams would call him, press would get out, all of a sudden he didn't get a job. Well, why can't he get a job?"

At the time of the study, 70 percent of the league's players were African-American, but only 6 percent of its head coaches were.

"I remember the discussion, and it focused on three things," said McKay, currently the president and CEO of the Falcons. "We needed to create a system that requires a process for hiring. There were too many times where the hiring was done based on whom someone knew from the past or one recommendation. There was not enough process.

"What the process led to was a leveling of the playing field, and it ensured those not with the highest priority would have a chance to be seen in that process and get the job. We had goals for minority hiring, but our hope was those goals would help take care of themselves as soon as a real process would slow down a hiring process that was happenstance, very quick and when no one was looking at 3:30 in the morning."

The rule stipulates that the minority candidate must have the same interview experience as the other candidates. They meet with the same executives, in person, for the same amount of time.

In 2003, there were three minority head coaches. By 2005, there were six, and by 2006 there were seven. When the Pittsburgh Steelers hired Mike Tomlin, who had been Minnesota's defensive coordinator for only one year, in 2007, the prevailing thought was the rule was working.

"I think from the side of the minority candidate who gets an opportunity to interview, I think it makes that person prepare for the opportunity, if it's legitimate," Cincinnati coach Marvin Lewis said. "The thing that you don't want to have is someone go into it with expectations that I'm just doing it because I have to do it. To me, that's not fair.

"If the hiring organization isn't going into it with an open mind, then I think that's the wrong way to do it, and hopefully no one goes about it that way because there's an emotion that the candidate goes through because of the preparation it takes to go into an interview for one of these positions in a serious way."

"We were surprised by it," McKay said. "I think it again brings back the idea we need to continue to work on career development. ... I'm not sure that instance didn't reaffirm that with us."

As a result, the NFL formed an advisory committee to help identify minority candidates in the coaching ranks and front offices. It also bolstered a program to help all aspiring candidates develop the requisite skills needed to climb the corporate ladder.

There remains work to do. Some in the league would like to see the Rooney Rule expanded again to include coordinators on the coaching side and directors on the front-office side. The argument against that is that coaches and general managers like to pick their own lieutenants. Still, why shouldn't they follow the same procedure for hiring as their club did?

Another area that can be improved is the development of minority coaches on the offensive side of the ball. Detroit's Jim Caldwell is the only current minority head coach with an offensive background. Heading into the 2015 season, there are only four minority offensive coordinators, and just two -- Indianapolis' Pep Hamilton and Cincinnati's Hue Jackson -- who call the plays.

"It's almost like you're questioning intelligence," one minority assistant said. "You have to be smarter on offense than you do on defense because you get players on defense and all they do is run around, which is not right. But I've heard that. That's the perception."

Another issue some in the league would like resolved is when a team has a position coach under contract and another club asks to interview him for a coordinator job, the team does not have to grant permission. This isn't a Rooney Rule issue, but it has temporarily blocked the path of aspiring minority candidates. It happened to Bowles earlier in his career, and it happened to Cincinnati co-defensive backs coach Vance Joseph in January, when the Bengals declined the Broncos' request to interview Joseph to be their defensive coordinator.

"Vance is a great coach, a young coach, and he's thought of very well," Lewis said. "He's got a lot of opportunities ahead of him. In this case, ownership felt like it was more valuable for the Cincinnati Bengals at this point. The opportunity will come, but it's not the first time this has happened to anyone. I went through it, a long time ago."

Arizona coach Bruce Arians doesn't agree with the practice of denying an assistant an opportunity to interview for a better job.

"You should never hold guys back from progress in their careers, and to me that's being selfish," Arians said. "I'm going to push our guys to become coordinators, to become head coaches. It's my job to replace them and have somebody ready to replace them. When I think back to when I was a young coach, if you didn't move on, you never moved up. To hold guys back, to me, guys forgot where they came from."

Bowles was standing in a hallway outside of the NFL scouting combine in February when New Orleans Saints coach Sean Payton walked by and slapped him on the back.

It took Bowles, who played defensive back in the league for eight years, 15 years working for six teams to become a head coach. But not until last year, after he'd interviewed for a handful of jobs, did he become comfortable with whom he would be as a head coach. He credited the interview process for that.

"You kind of grow into your interview," Bowles said. "I don't think you get it right the first time. You may think you know what you want going in there, but you won't really know until you go in there and try to appease everybody and you try to say and do the right thing. Then finally, you just be yourself, and either you're good enough or you're not, and you kind of let it fly. I think that's what I did.

"Whether you say you want to turn down [the interviews] or take them, they help you grow as a football coach and as a person. It helped me grow to know exactly what I wanted. You learn something different each time, and you finally say this is me, this is who I am, this is what I'd do. And then you let them decide, and you have no regrets."

Arians coached Bowles in college at Temple, and the two are close friends. He heard what people said about how Bowles interviewed.

"That's the part I think they just missed him," Arians said. "They take that low-key voice and think he's not going to be demanding enough or whatever. That's the problem with people who interview. Half of them don't know what they're doing."

Which makes keeping the Rooney Rule in place -- and maybe even expanding it -- all the more important.