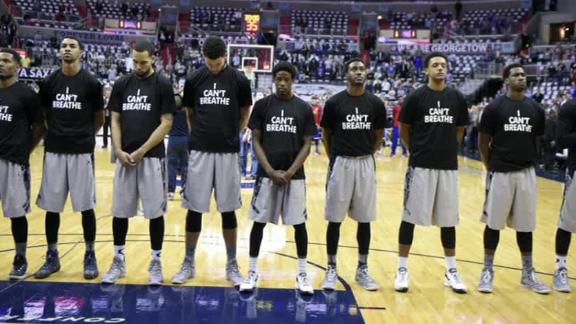 WASHINGTON, D.C. -- The Georgetown Hoyas became the latest athletes -- and the first in college basketball -- to don "I Can't Breathe" T-shirts before Wednesday night's 75-70 loss to No. 10 Kansas.

The entire Hoyas roster took its final pregame warmup of the evening in black shirts with white font. A team spokesman told ESPN.com the decision to wear the shirts was made collectively between the players.

"There were a variety of reasons why we wanted to wear the shirts," said D'Vauntes Smith-Rivera, who had 10 points, 10 rebounds and six assists. "There were quite a few families that lost their loved ones this year: Mike Brown, Trayvon Martin ... we wanted to represent those families that all lost. It wasn't just for this one scenario for a lot of people who know just this one case, I just think we wanted to represent the families and send our condolences that way."

The shirts quote the final words of New York City man Eric Garner, who died in July after a police officer placed him in a chokehold during an arrest for selling loose cigarettes. A video recording of the incident showed Garner repeatedly saying "I can't breathe." On Dec. 3, a New York grand jury declined to indict the officer involved in Garner's death, sparking waves of protest about Garner's case specifically and police conduct more generally.

"We didn't wear the shirt to say the cops were wrong, or the system was wrong," Hoyas senior Josh Smith said. "We wore the shirts just to show our condolences to the family. No matter how you look at it, we don't know who's right or wrong, but they still lost somebody.

"We're not choosing sides. We're not saying one side's wrong or one side's right. We're looking out for the [Garner] family. They're the most important people right now in this whole thing. With all the protests going on, they lost someone."

The Jayhawks took notice of the shirts, with freshman guard Kelly Oubrecalling it a "powerful" team statement.

"It's a pretty strong stance," Kansas coach Bill Self said. "I think it's pretty good. It certainly shows a lot of solidarity amongst their unit. I don't see anything negative with it at all."

After the game, when a reporter asked John Thompson III to connect the protest to his father John Thompson II's legacy of outspoken beliefs -- in 1989, Thompson II walked out before a game in protest of Proposition 42, an NCAA rule denying scholarships to athletes who failed to qualify academically, and once faced down a D.C. area drug dealer who had developed relationships with his players -- the elder Thompson offered his thoughts from the back of the room.

"It's a f---ing school, man," Thompson II said. "That's your responsibility, to deal with things like that."

Thompson III said the decision to wear the T-shirts was the result of team discussions beginning as far as back as the team's November trip to the Bahamas for the Battle 4 Atlantis.

"We've been as a group talking about this for a while," Thompson said. "I thought it was important, before you jump out there, that they understand and we talk about and have several conversations about what's going on, what does it mean, and why do you want to wear this shirt.

"This isn't one of those things that you go along with because it's something that's trending.

"The emotions and feelings in the locker room are all over the place. It's not necessarily that everyone feels the same way. Emotions [range] from fear, to frustration, to confusion, to anger. And the reasons why every individual wanted to wear it is all over the place too. Which is probably pretty consistent with the emotions across the country right now."

The Garner decision followed a Ferguson, Missouri, grand jury's decision not to indict police officer Darren Wilson in the death of Michael Brown, as well as a Cleveland police shooting of unarmed 12-year-old Tamir Rice.

To date, several NBA players have worn the "I Can't Breathe" shirts during their pregame routines, including the Chicago Bulls' Derrick Rose, the Cleveland Cavaliers' LeBron James and Kyrie Irving, the Brooklyn Nets' Kevin Garnett and Deron Williams, and, on Tuesday night, the entire Los Angeles Lakers roster.

The NBA has thus far declined to fine players for violations of uniform rules. Section 22, Article 2 of the NCAA men's basketball rulebook states merely that "warm-ups are any pieces of clothing worn by team members that must be removed before they become players," and are "not considered part of the uniform."

NFL players have also donned the shirts during warmups.