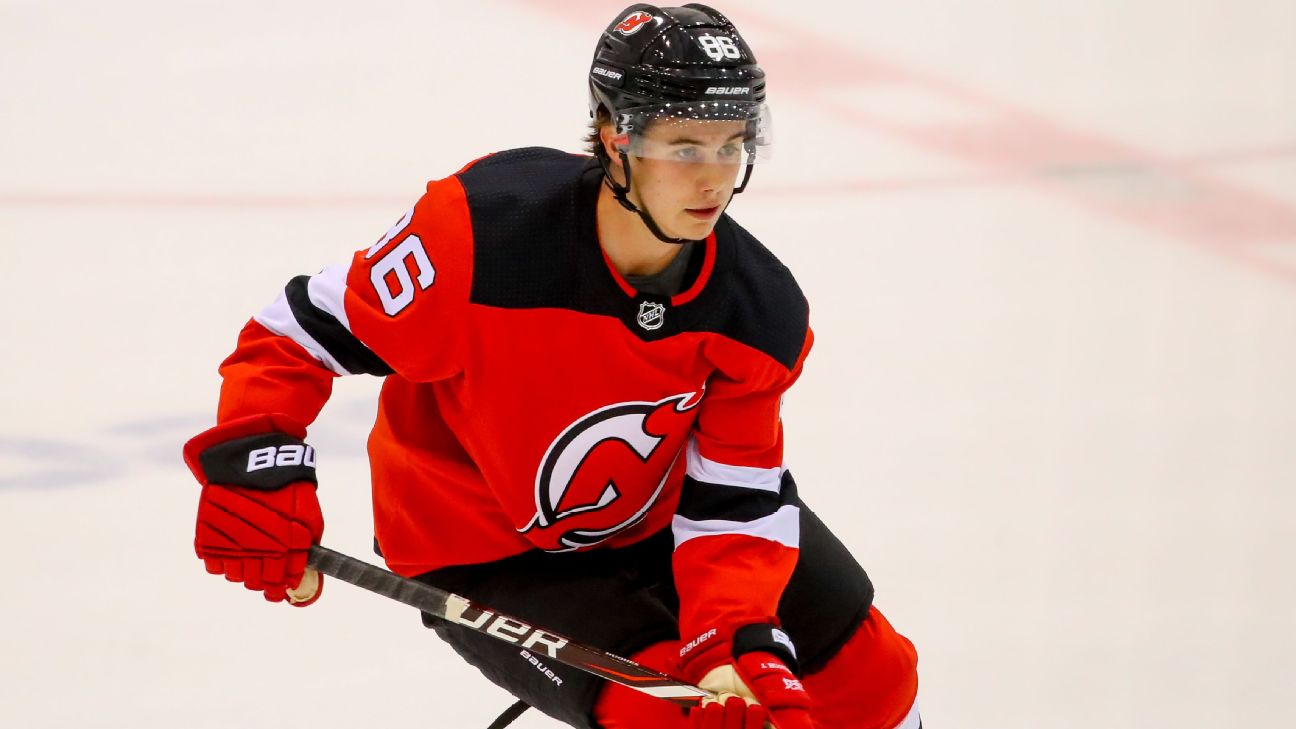 BUFFALO, N.Y. -- Rookie center Jack Hughes need not be too disappointed over the dud he and the New Jersey Devils produced in the No. 1 draft pick's debut in a competitive NHL setting Friday night.

Overlooking the 6-4 loss to Buffalo at the Sabres' prospects tournament, Devils minor league coach Mark Dennehy said he was more impressed by how Hughes' focus never wavered when the game was essentially out of reach.

"It's 6-3 and we're on the power play, and he asked me a question that tells me not only is he locked in, but that he's a student of the game," said Dennehy, declining to share the specific question Hughes asked.

"It was a situational thing, and as a coach, for a player at his young age to sort of change gears was pretty impressive to me," said the coach of the American Hockey League's Binghamton Devils, who was behind the bench.

"As skilled as he is, he's a competitor, too," Dennehy said. "I know he's not happy with the result. But I think he showed everybody, especially the Devils fans, that he's got a bright future."

The 18-year-old Hughes wasn't in much of a talkative mood following a game the Devils trailed 6-0 before scoring four times over the final 23 minutes.

"We could've played better," Hughes said. "I felt OK in my game. First game of the year, so just a building block."

Though he scored a goal, Hughes was more disappointed in the several chances he missed. Turnovers were an issue, too, for Hughes, who coughed up the puck several times in the opening period.

"It was more just getting my feet wet again," said Hughes, whose previous game was representing the United States at the World Championships in May. "I'm sure it's only a start."

His night got off to a bad start when Hughes fell while losing a faceoff in the Devils end, which led to the Buffalo's Kyle Olson opening the scoring 30 seconds in. On Hughes' next shift, he coughed up the puck at his own blue line.

It wasn't until midway through the opening period when Hughes began showing off the playmaking skills which led him to set the two-year USA Hockey National Developmental Program scoring record with 228 points (74 goals, 154 assists) in 110 career games.

Driving into the right corner of the Sabres' end, he eluded a defender and made a no-look pass to the left point to set up a scoring chance.

Hughes' highlight came with 3 minutes, 43 seconds left in the second period. After getting knocked down by Buffalo's Casey Fitzgerald in the Sabres' end, Hughes got up, raced to corral a loose puck and scored the Devils' first goal.

"It was more beat the goalie to the spot, grab the puck, spin around and shoot," Hughes said, describing the goal. "Yeah, it was nice. Good to get on the board. But, I mean, I had five or six other chances and should've scored at least one or two more."

Hughes and the Devils' prospects will get two more games in Buffalo to knock the rust off before the team opens training camp next week. And that's when most eyes will be on Hughes, the 5-foot-10 playmaking center from Orlando, Florida, who was the eighth American to be selected with the No. 1 pick.

Hughes was part of a Devils lineup that featured two other first-round picks: center Michael McLeod (selected 12th overall in 2016) and defenseman Ty Smith (17th in 2018). And then there's newly signed forward Jesper Boqvist, a 2017 second-round selection, whose 35 points tied him for second among players 21 and younger in the Swedish Hockey League last season.

The Devils are counting on Hughes to immediately contribute to a roster that's been restocked after New Jersey finished last in the Metropolitan Division. A day after drafting Hughes, New Jersey turned heads by acquiring defenseman P.K. Subban in a trade with Nashville, and also signed power forward Wayne Simmonds in free agency.

Though they've yet to meet in person, Subban is already looking forward to assisting in Hughes' development.

"I think the focus needs to be on his development as a player. He's got a lot of time, and there's going to be a learning curve," Subban told The Associated Press. "But he's a tremendous talent, and you're going to see when the puck drops. I'm just excited to be able to try to help someone like that in any way I can."

Devils head coach John Hynes watched from the stands and liked what he saw in Hughes' first game.