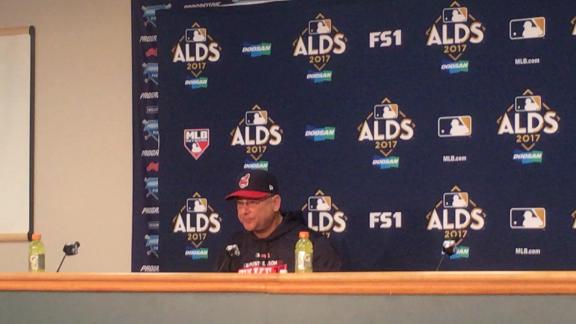 CLEVELAND --Indiansdesignated hitter Edwin Encarnaciontold ESPN's Marly Rivera that he believes he will be in the lineup for the decisive Game 5 of the American League Division Series against the New York Yankees on Wednesday.

Encarnacion has been out since Game 2, when he landed awkwardly while retreating to second base on a line-drive double play.

"I feel very good," he told ESPN after Tuesday's workout. "I ran, I hit, and did everything we deemed necessary to evaluate if I can play tomorrow. Me being in the lineup tomorrow is what we all want; it's what I want. Tomorrow I'm coming in early to do my treatment and follow up and do everything I did today in order to be ready for the game."

Speaking before the workout, Cleveland manager Terry Francona also said he was optimistic that Encarnacion would play.

"I think he is going to be OK," Francona said.

Encarnacion said the fact that Wednesday is an elimination game makes a difference in his status.

"Yes. It would be different if you knew that you had one more chance," he told ESPN. "But there is no tomorrow and I have to do whatever's necessary to be in the lineup because I know that I can help this team win."

After signing a three-year, $60 million contract last offseason, Encarnacion hit .258 with 38 home runs and 107 RBIs for the Indians during the regular season. The right-handed-hitting slugger has not fared well against the Yankees' Game 5 starter, lefty CC Sabathia; Encarnacion has a career batting averageof .273 with 0 home runs and 4 RBIs in 55 at-bats.

In Encarnacion's place, Michael Brantley has gone 1-for-11 in the series. Brantley, a two-time All Star, has had to deal with injuries the past two years, and Francona was hoping the outfielder's timing may be off.