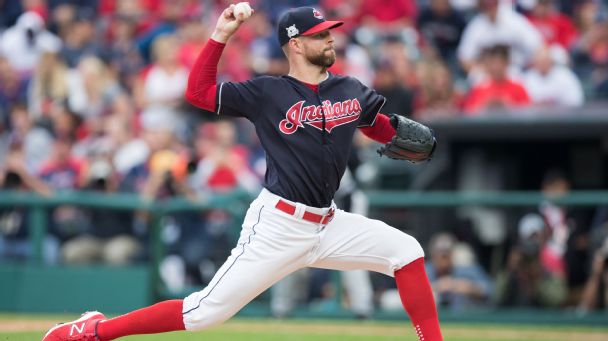 CLEVELAND -- The Indians' grim postseason historysuggests theyshouldhave reason for concern as they prepare for a fifth and deciding game against the New York Yankees in the American League Division Series. The Tribe has lost five straight potential postseason series clinchersand 16 of its past 19 such games since 1999.

Pardon the Cleveland players if they don'ttreatthat ominous track record as an emotional anchor around their necks.The Indians will be playing at home Wednesday night behind Corey Kluber, and those two factors are enough for one new arrival to think they're in the driver's seat.

"He's a heck of a driver,'' outfielder Jay Bruce said of Kluber.

Kluber's long- and short-term résumé suggests he's not an opponent that anyone wouldrelishfacing in a win-or-go-home game. He led MLB starters this year in WHIP (0.87), ERA (2.25), quality start percentage (76 percent), strikeout-to-walk ratio (7.36-1) and OPS against (.556), and heapplied aone-man full-court press in August and September toovertakeBoston's Chris Sale in the AL Cy Young Award race.

When Cleveland manager Terry Francona strayed from convention and started Trevor Bauer in the division series opener, he gave the Indians a cushion at the back end with the knowledge that Kluber would be pitching on full rest in Games 2 and 5. But Kluberthrew a glitch into the game plan whenbombed in his first start at Progressive Field on Friday. He failed to develop any kind of rhythm on the mound, threw an uncharacteristically low 45 strikes among his 76 pitches and lasted a mere 2 innings in a game Cleveland rallied to win 9-8.

Francona, from his vantage point in the dugout, noticed Kluber was sitting on his back side more than usual andseemed out of sorts mechanically. Kluber tried to work out the kinks with pitching coach Mickey Callaway in his between-starts side session, and he's ready to try to rectify everything that went wrong in Game 2.

"I didn't pitch well, didn't have good command, didn't throw the ball where I wanted to,'' Kluber said. "So that's kind of what it boils down to.''

While there's a natural inclination to think Kluber will be extra motivated to bounce back from a rare downer of a day, he never strays from his approach regardless of the circumstances. When the Indians lined up for the opening introductions beforeALDS Game 1 andthe homecrowdcheered wildly for him, Kluber didn't smile, tip his cap or change his expression one iota. It was a snapshot of the demeanor he shows around the park from the first day of spring training until the Indians clean out their lockers at the end.

Yankees ace Luis Severino recovered from a horrific outing in the wild-card game against Minnesota to pitch well in ALDS Game 4 on Monday night, and the Indians expect a similar script from Kluber.

"He'll be the same way he is when he's going to lunch, or pitching in [smaller] games, whatever,'' center fielder Jason Kipnissaid."He'll be stoic, monotonous and very routine-oriented. I don't think he's going to go into this start looking to change everything he's done just because they got to him in the first game.

The Indians have the luxury of knowing that the bullpen tandem of Andrew Miller and Cody Allen will be rested and ready to go in the late innings. Allen has been sharp against the Yankees -- with six strikeouts in 4 1/3 shutout innings -- and the Indians' faith in Miller wasn'ttested in the least byGreg Bird's solo homeroff him in New York's 1-0 victory Sunday.

The challenge for Cleveland will be mounting enough offense to avoid playing catch-up against New York's dominant bullpen. The Indians struck out 25 times in back-to-back losses in New York, and several Cleveland hitters appear to be pressing in the absence of designated hitter Edwin Encarnacion, whose ankle injury kept him pinned to the benchin the Bronx. The Indians have hit .173 as a team with 46 strikeouts in 133 at-bats throughthe first four games of the series.

If Encarnacion is able to return to the lineup for Game 5 asFrancona expects,it will help provide a tangible and emotional lift for the Indians. They'll also have the support of a home crowd thatgot all dolled up in redduring the first leg of the series and is hungry for the city's first World Series title in 69 years.

The Indians posted a better record on the road (53-28) than at home (49-32) this season, logged a slightly better OPS (.793 to .782) and hit more home runs away from Progressive Field. But regular-season numbers are secondary to the sense of comfort they'll feel upon returning to their usual routines in the lead-uptoGame 5.

It all begins with Kluber, who has a way of injecting confidence throughout a clubhouseon the days he pitches.Few nicknames in baseball convey a better sense of what a player is all about than "Klubot.''

"What we've come to expect out of Corey is excellence,'' Bruce said, "and I think he expects that out of himself. The other day, baseball happened. He didn'tthroweight shutout innings and strike out everyone like he usually does. But he'll be ready to go. We couldn't ask for a better guy to be on the mound.''

As the Yankees closed out their 7-3 victory in the Bronx late Monday night, a hearty group of fans behind home plate broke into a chant of "We want Kluber!''