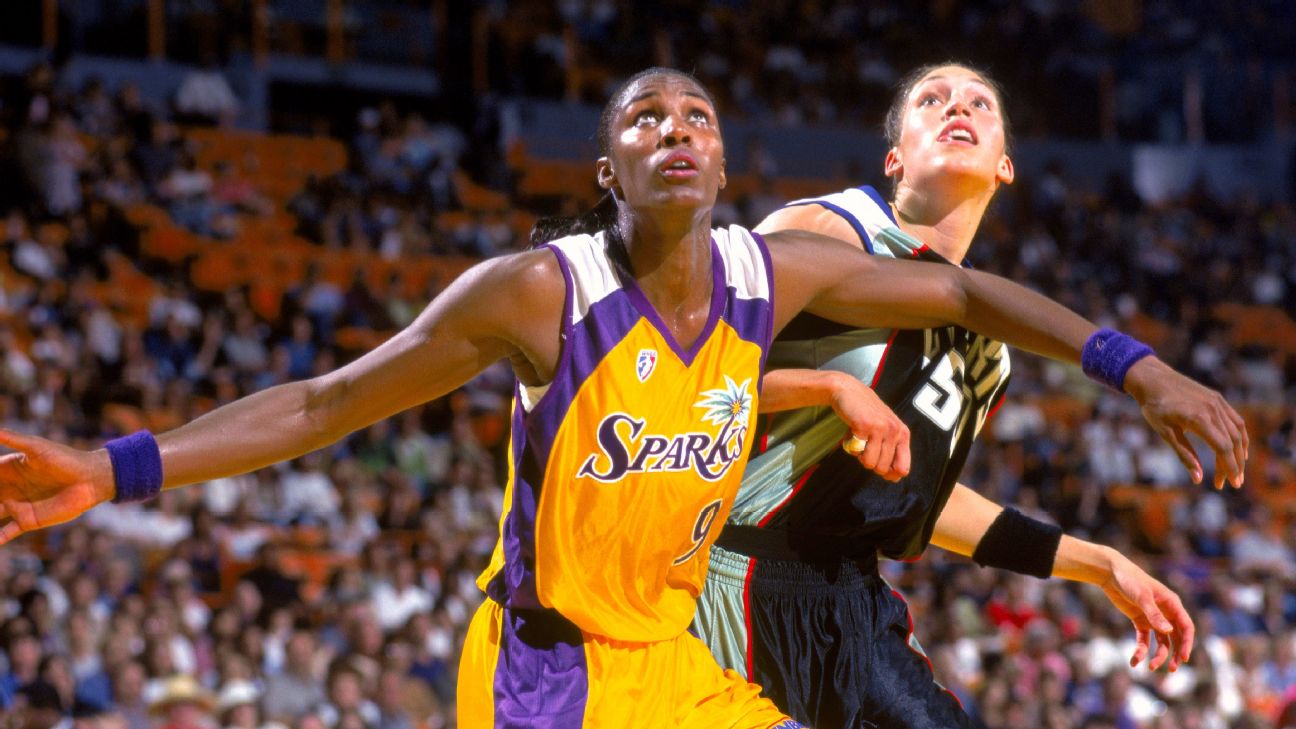 Editor's note: This story was originally published in 2016, for the 20th anniversary of the WNBA's inaugural game, which was played on June 21, 1997. The Los Angeles Sparks host the New York Liberty on Sunday (4 p.m. ET, ESPN/ESPN App) as the WNBA celebrates the anniversary of the league's opening game during this 25th anniversary season.

Penny Toler grew up in Washington D.C., started college basketball in San Diego, transferred and became a star at Long Beach State, and then went overseas to have a professional basketball career. This was the late 1980s, and whatever dream she had then of competing professionally in the United States was only that. A dream.


So picture how emotional it was for her in June 1997 to be in Inglewood, California, driving to the Great Western Forum -- longtime home of the NBA's Los Angeles Lakers -- and seeing ... herself. A very large version of herself, in fact.

She had been told by then-Lakers owner Jerry Buss to expect a surprise, but she never guessed it would be this. Five giant banners were hanging on the side of the arena, featuring players for the new WNBA team, the Los Angeles Sparks, also owned then by Buss. Toler was on one of the banners.

"Can you imagine?" she said, smiling at the memory. "I was an older player -- had already done eight years overseas -- and coming back to all this. I felt like a rock star, and hadn't even played a game yet."

But shortly after, when she did take the floor for the Sparks, Toler would put herself in the history books. She scored the first basket in the first WNBA game -- New York at Los Angeles -- on June 21, 1997.

In the moment, the magnitude of those two points didn't really register with her. She was just glad that after some nervous trips down the court by both teams, the ball had finally gone in the basket. It was a baseline jumper off a pass from Jamila Wideman. The kind of shot Toler had hit more times than she could count on courts across the globe.

But this one was extremely significant. She would play three seasons in the WNBA, then become the team's general manager, a position she held until 2019. And she'll always be linked to the start of the league.

"I might have only slept two or three hours the night before, because of the excitement," Toler said. "I was just hoping not to be tired at tipoff. But I think my energy came on because I knew something incredible was happening right now."

Battle of the coasts

It made sense that the WNBA would launch the eight-team league by featuring its two biggest markets. The Saturday afternoon game was televised by NBC, and the president of the new league, Val Ackerman, tossed up a ceremonial jump ball between Los Angeles' Lisa Leslie and New York's Kym Hampton.

Not everything went according to plan. Jeffrey Osborne was supposed to sing the national anthem, but he didn't arrive on time.


"He was stuck in traffic," Ackerman said. "So that created some chaos at the beginning. They had to use a recording of the anthem.

"But another thing I remember is the fans being so excited and passionate. Some people were even crying. And also, I remember that the players seemed very nervous. It was not a well-played game. But we had a monster rating for the game, so clearly the advertising and promotion had gotten through, because the viewership was very high."

Ackerman and then fellow NBA executive Rick Welts were on hand, as was Buss. Welts, now president/chief of operations for the Golden State Warriors, has vivid memories of the first WNBA game, too.

"It all was like one giant introduction party for a brand-new league," Welts said. "It was hopefully a symbol of the change that was going on in our society as it relates to the role of women and opportunities for them."

Rebecca Lobo, a 1995 UConn grad and 1996 Olympic gold medalist who played for the Liberty, had her own revelation on the bus ride from the airport to the team's hotel. She saw a billboard alongside the highway with a picture of herself and Leslie, along with the "We Got Next" slogan advertising the upcoming game. Lobo thought about how many thousands of people had been driving by that billboard.

Then, on the court at the Great Western Forum on game day, Lobo flashed back to her memories of growing up an NBA fan.

"All those games I'd watched as a kid, the Celtics-Lakers games, it was in that building, on that court," said Lobo, who finished the first game with 16 points and six rebounds. "It was that same kind of atmosphere in terms of a lot of fans there, TV cameras right there. It felt big.

"The game itself I remember us winning, which was important. But there was just so much around it that is even a bigger memory to me than some of the things that happened on the court."

Lobo's Liberty teammate Teresa Weatherspoon was nearly eight years older than her, and like Toler had played a long time overseas before the WNBA launched.

"We were scared to death. That's just being honest," said Weatherspoon, who had 10 assists in the opener. "The night before the game, we were all talking about how afraid we were. Not afraid to play the game, but we wanted to do well because it was televised.

"I remember being on the bus [going to the game], and we all were looking at each other like, 'It's time.' It was really here for us to be able to perform in America, and we're starting out in L.A. What a place to start: East Coast, West Coast. East Coast wins."

Indeed, the fact that the Liberty won 67-57 was foremost on Toler's mind when the game ended. She was disappointed to launch the Sparks' franchise with a loss, especially at home, where 14,284 fans had attended. Among them were director/actress Penny Marshall and Lakers legend Magic Johnson, who is now part of the group that owns the Sparks.

Leslie had 16 points, on 6-of-17 shooting, and 14 rebounds. New York shot 43.3 percent from the field, and the Sparks a dismal 30.9. The teams combined for 44 turnovers. As everyone involved readily acknowledges, it showcased neither team at its best. But all things considered, no one should have expected it would.

When reporters began asking Toler about scoring the first basket, and she had to think about it for a second. Really? I did that?

She later asked teammate Daedra Charles, who had missed an earlier shot, if she had realized its potential significance.

"I said to Daedra, 'Were you trying to make the first basket?' She said, 'I sure was!' " Toler said. "So that's my funny memory of the first shot. I didn't know it at the time. But looking back on it, it's an honor I love to have. There can only be one first basket."
Report a correction or typo
Related topics:
sportsespnwnbanew york libertylos angeles sparksdailywnba20espnw
Copyright © 2021 ESPN Internet Ventures. All rights reserved.
TOP STORIES
Rikers inmate dies of COVID on same day judge grants emergency release
US religious group says 17 missionaries kidnapped in Haiti
Gabby Petito's ashes scattered at national park, dad's post suggests
Dead body found wrapped in comforter in NYC
Central Park Carousel reopens for first time since pandemic
Bike messenger delivering food stabbed to death in e-bike robbery
AccuWeather: Major cooldown after round of severe storms
Show More
Robert Durst hospitalized with COVID-19, his lawyer says
Purse snatchers rob woman inside Manhattan AMC theater
Lotto player scores million-dollar ticket at NYC bodega
16-year-old shot, killed at busy intersection in NYC
COVID Update: CDC releases new guidance ahead of holiday season
More TOP STORIES News