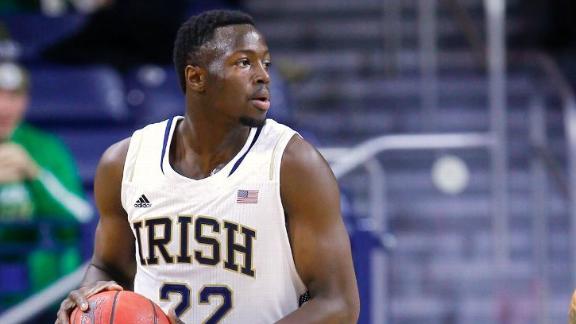 The pair had been reinstated and will return to Notre Dame beginning with summer school next month, the school said Wednesday.

The 6-foot-2, 203-pound Daniels was second on the team last season with 49 catches for 745 yards. He will be a senior academically in the fall but has two years of athletic eligibility left because he didn't play as a freshman.

Daniels said when he was suspended in January that "attending the University of Notre Dame is a privilege and with that comes a certain level of academic responsibility" and that he intended to re-enroll in the summer and earn his degree.

The 6-5 Grant was leading the Irish in scoring at 19 points per game as well as in assists (6.2) and steals (2.0) when he was suspended after the Irish squandered an eight-point lead in the final 50 seconds in a loss to then-No. 3 Ohio State, falling to 8-4.

Without Grant, the Irish finished the season 15-17 in their first season as a member of the Atlantic Coast Conference -- the first losing season since the 1998-99 season in John MacLeod's last year as coach.

Grant had said he was suspended because of an academic matter that he hadn't handled properly.

Grant, the son of former NBA player Harvey Grant, was a senior academically last season but has a year of eligibility left because he did not play as a freshman. Coach Mike Brey has previously said Grant would need to request a fifth year of eligibility from the school after he completes his eighth semester in school.

Grant had said from the outset he planned to return to Notre Dame in the fall.

The suspensions of Daniels and Grant followed the suspension of quarterback Everett Golson for the fall semester for what he termed "poor judgment on a test." Golson was readmitted to the school in December and took part in spring practices.