Is the Stanley Cup title window closing for the New York Rangers and Washington Capitals? 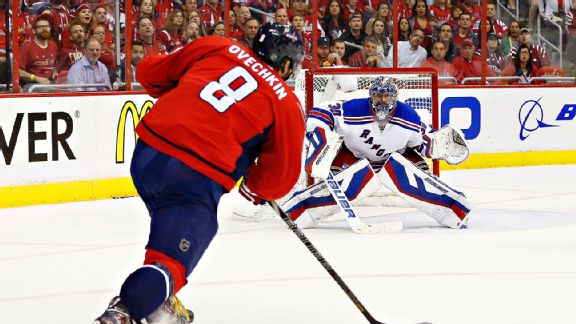 During a conference call on July 1 with reporters, free-agent defenseman Kevin Shattenkirk made it clear that he'd decided to sign with the New York Rangers for reasons in addition to their potential to win their first Stanley Cup since 1994. When he was 5.

Joining the Blueshirts would fulfill a "lifelong dream" for Shattenkirk, now 28, who grew up as a Rangers fan in New Rochelle, New York, a suburb about 20 miles north of Madison Square Garden. Shattenkirk was willing to take less money to play for the Rangers than he would have from other teams.

"There were some sacrifices, but those are things you leave on the table to have an opportunity like this," he said.

Shattenkirk took a "hometown discount" to play for the Rangers, but it is not as if he is playing for free: he agreed to a four-year, $26.6 million contract. Jeff Gorton, the Rangers' general manager, said the team wanted to stay away from a longer deal because of uncertainty over the NHL's varying salary cap.

"You have to give Kevin credit for this," Gorton said. "He wanted to come here."

But Shattenkirk also referred to another "lifelong dream" during the call. A veteran of seven seasons, Shattenkirk has never played for a team that has won the Stanley Cup -- or even one that has made the Cup finals, though he came close with theSt. Louis Blues, who made it to the conference finalsin 2016.

"No matter where you want to go, you want to help your team win the Stanley Cup, and there's no better place for me to do it than in New York," he said.

The general perception, however, is that the Rangers' so-called "Stanley Cup window" is either closing -- or has already closed. Two veteran core members of the 2016-17 team, center Derek Stepan and defenseman Dan Girardi, have moved on since New York's season ended May 9 with a loss to theOttawa Senatorsin Game 6 of their second-round playoff series.

Henrik Lundqvist, the Rangers' 35-year-old goaltender, has a contract that will run four more years. But Lundqvist had a mediocre season in 2016-17, failing to finish among the top 10 goalies in four major statistical categories: goals-against average, save percentage, wins and shutouts.

A "Cup window" can be loosely defined as the period of time that the core of a contending team, as comprised, can win a championship. The subtractions of Stepan and Girardi and addition of Shattenkirk were significant adjustments to the Rangers' core.

"Whatever term you use -- windows, timing, whatever -- it's impossible not to factor how to ride the momentum of core players rising to their optimal playing years," said Mike Milbury, the former New York Islanders GM who is an NHL analyst for NBC.

"And, on the flip side, it's problematic for managers who must deal with those same players whose 'windows,' or prime years, have passed them by. Take Bill Torrey after the dynasty ended," Milbury said, referring to the Islanders' GM who amassed enough talent to win four consecutive Stanley Cups in the early 1980s. "Did he wait too long to convert the aging players to assets, or was loyalty to their success paramount?"

Before the 2016 trade deadline, Washington Capitals GM Brian MacLellan said he was establishing a "two-year window" for the core of his team to win the Stanley Cup, saying, "We're going for it this year, we're going for it next year, and then after that we're evaluating where we're at."

The Caps won only one playoff series in each of the past two years, although there was an enormous asterisk: They lost in the second round each time to the Pittsburgh Penguins, who went onto win the Stanley Cup both seasons. Washington had the best regular-season record in the league both years, and it lost Game 7 of the 2017 Eastern Conference semifinals to the Penguins 2-0.

Still, as Capitals defenseman Karl Alzner said two days after that game, "This is a pretty good window that we had here, and unfortunately it's not there anymore."

MacLellan answered one pressing question in late May by confirming that Barry Trotz would remain as Washington's coach. He also decided to keep captain Alex Ovechkin, who turns 32 in September and has never played for a conference championship.

But Alzner signed with theMontreal Canadiensand wingerJustin Williams signed with theCarolina Hurricanes.Shattenkirk, whom the Capitals acquired from St. Louis for the stretch run, bolted to New York. Washington did re-sign right wingerT.J. Oshie, centerEvgeny Kuznetsov and defensemanDmitry Orlov, but it traded forwardMarcus Johansson, a Capital for seven seasons, to theNew Jersey Devils.

"We spent the last three years building that team to where it was last year, both player-wise and salary-wise," MacLellan said during a July 3 conference call with reporters. "And I think we were expecting to run into some issues here going forward. It's no different than the teams that have won in the past. I mean, we have the same kind of hangover, but we haven't won a championship -- and we're dealing with it now.

"We knew that this point was coming, where we weren't going to be able to keep everybody, and we were going to lose people that we really liked."

A month ago, hockey fans at HFBoards.com engaged in a lively debate about which teams had open Stanley Cup windows, closed Stanley Cup windows, or opening or closing Cup windows. About one-third of the 31 teams were gauged to have "open" windows, with the Penguins,Nashville Predators, Senators, Edmonton Oilers, Tampa Bay Lightningand the Capitals mentioned most often.

"So, yes, absolutely managers need to consider how to ride the wave of their prime players' peak years," Milbury said. "In Vancouver, the Sedin [brothers'] wave has crested. Unless there is an infusion of next-generation core players, the Sedins are unable to drive their team forward to a championship, as they nearly did in 2011."

Mentioning the Penguins and their two centers, Sidney Crosby and Evgeni Malkin, Milbury added, "In Pittsburgh, the Crosby-Malkin wave is a great example of how the [general] manager has recognized the opportunity at hand and provided a supporting cast to buttress his superstars in pursuit of championships."

One of the members of that supporting cast, forward Carl Hagelin, was a part of the core of the Rangers team that made it to the Cup Final in 2014. Hagelin played another season with the Rangers, helping them advance to the Eastern Conference finals. Because they could not afford to keep him under the salary cap, however, they traded him to theAnaheim Ducks.

Hagelin spent a half-season with the Ducks before he was traded to Pittsburgh. The Penguins also brought in a new coach, Mike Sullivan, and Hagelin thrived under Sullivan, winning two Cups. The Rangers are still hunting for their first Cup since before Shattenkirk entered kindergarten.

New York began to account for the loss of Stepan by signing free-agent center David Desharnais on Wednesday. Gorton said that forward J.T. Miller could move to center full time. Shattenkirk is perceived to be a big upgrade over the aging Girardi, who signed as a free agent with Tampa Bay.