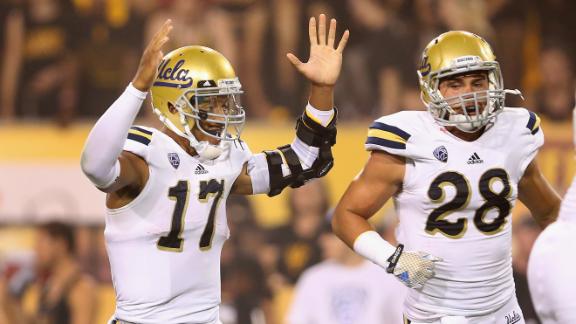 TEMPE, Ariz. -- Noticing the letters "UCLA" carved into the giant pitchfork at midfield, Arizona State officials scrambled to cover up the blemish.

They did so quickly and posted a security guard to make sure no one else defiled the fork, even chasing away a UCLA player who dared step on the logo.

Once the game started, the Bruins were all over the logo -- and everywhere else in Sun Devil Stadium.

Ishmael Adams gave UCLA a boost with a 95-yard interception return for a touchdown just before halftime and followed with a 100-yard kickoff return for another score in the third quarter, sparking the 11th-ranked Bruins to a 62-27 rout against No. 15 Arizona State on Thursday night.

"We thought it was kind of funny that that were scrambling to cover it up so fast," UCLA receiver Thomas Duarte said. "When something like that happens, you know you've got the edge, that they're letting little things get under their skin."

UCLA (4-0, 1-0 Pac-12) won its first three games by a combined 18 points against non-ranked opponents, raising questions about just how good the Bruins are this season.

They provided an emphatic answer -- at least on offense -- by turning a matchup of the past two Pac-12 South champions into a rout, scoring 28 points during a 7-minute span of the second and third quarters.

UCLA had 582 yards of total offense, five plays of 80 yards or longer and scored the most points in the 55-year-history of Sun Devil Stadium.

Brett Hundley was the catalyst, returning from a left arm injury to hurdle defenders, dive for first downs and complete passes all over the field. He threw for 355 yards and four touchdowns on an efficient 18-of-23 passing, including an 80-yard score to Jordan Payton to open the second half.

"It's an absolute inspiration to offense, defense and special teams for him to not just play, but to be out jumping over guys and diving on the ground," UCLA defensive coordinator Jeff Ulbrich said.

The downside for the Bruins was the defense.

The problem for the Sun Devils was a few of their faults were exposed, too.

The rebuilt defense had its hands full with Hundley and the Bruins all night, giving up a string of big plays.

Mike Bercovici showed flashes of brilliance in replacing injured starter Taylor Kelly, throwing for 488 yards and three touchdowns in his first start while setting school records with 42 completions on 68 attempts.

He also displayed his penchant for turning the ball over, throwing two interceptions and losing a fumble that led to a UCLA touchdown.

The combination sent the Sun Devils to an ugly loss after three wins to start the season.

"That was embarrassing. It was a frustrating night," Arizona State coach Todd Graham said. "The standard that we set here was not met tonight."

Hundley was injured against Texas on Sept. 13 and was a game-time decision, according to coach Jim Mora.

Wearing a brace on his left elbow, Hundley trotted out for the first series -- and had the Bruins rolling from the start.

He led UCLA to a pair of field goals in the first quarter, and then hit Eldridge Massington on a short pass that he turned into an 80-yard touchdown by breaking a couple of tackles. Hundley followed with a 21-yard run to set up a 3-yard touchdown pass to Nate Iese and opened the second half with the first-play TD pass to Payton, putting the Bruins up 34-17.

Hundley, who was sacked nine times in a loss to Arizona State last season, also hurt the Sun Devils with his legs, leapfrogging a defender during a run and finishing with 72 yards and a touchdown.

"I thought he was a little tight at first," Mora said. "Then he just relaxed. He played fearless and that's what we were looking for."

Bercovici had been waiting for this chance since Kelly beat him out as Arizona State's starter in 2012.

Kelly injured his right foot against Colorado on Sept. 13 and was still on crutches when he went out for the coin flip.

Jittery early, Bercovici seemed to right himself with 5-yard touchdown pass to Kody Kohl and added a 29-yard scoring pass to Cameron Smith just over the reach of a UCLA defender.

He had some shaky moments after that, throwing a pair of interceptions, including the one Adams returned for a touchdown with 2 seconds left in the first half.

The Bruins poured it on after that.

Hundley threw his long touchdown to Payton, Adams raced off on his kick return and Nate Starks put UCLA up 48-20 on a 1-yard run, two plays after Bercovici lost a fumble at the Arizona State 23.

"Obviously, things didn't go our way with the kickoff return and the fumble," Bercovici said. "We can only blame ourselves for those because they're so self-inflicted wounds and UCLA did such a great job on defense and special teams."

Adams became the first FBS player with an interception return and a kickoff return touchdown in a road win since West Virginia's Adam "Pacman" Jones in 2003.