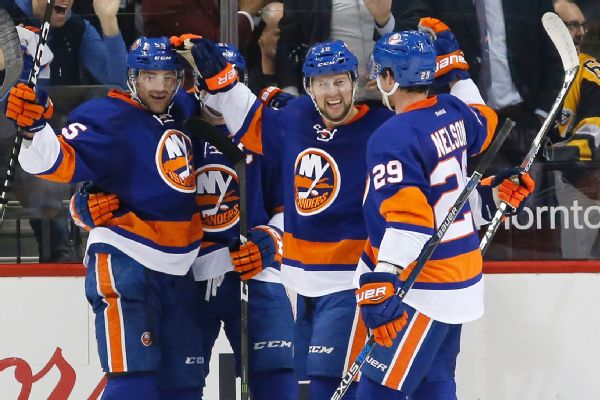 ESPN
MINEOLA, N.Y. -- The New York Islanders have made a bid to return to the New York City suburbs.

The NHL team that moved from Long Island to Brooklyn two years ago submitted a bid with several other partners Thursday to develop a new arena at Belmont Park in Nassau County.

"New York Arena Partners, LLC has submitted a comprehensive proposal to create a world-class sports and entertainment destination at Belmont Park, which we look forward to discussing with the Empire State Development Corporation," the team said in a statement.

New York Arena Partners includes the owners of the New York Mets. The Empire State Development Corp. announced in July it was seeking to develop 36 acres of vacant and underused parking lots at the site of the racetrack.

Belmont Park hosts the Belmont Stakes, the final leg in horse racing's Triple Crown, every June. There are no plans to close the racetrack; the new development would largely be across the street from the track.

The Empire State Development Corp. said it does not comment about the bidding process. There is no timetable for a decision to be made.

The Islanders' move to Brooklyn's Barclay's Center was announced after a failed attempt to secure public financing for a refurbished Nassau Coliseum, which was home to the team from 1972 until 2015.

Fans have expressed displeasure with the Brooklyn move, and the team has a lease with an opt-out clause that could allow it to leave the Barclays Center, home to the NBA's Brooklyn Nets, after the upcoming season.

The Islanders played a preseason game this month at the Nassau Coliseum, which has been refurbished since their move. Seating capacity at the coliseum is now 13,917, less than both the 16,170 it had previously and the 15,795 currently at Barclays Center.