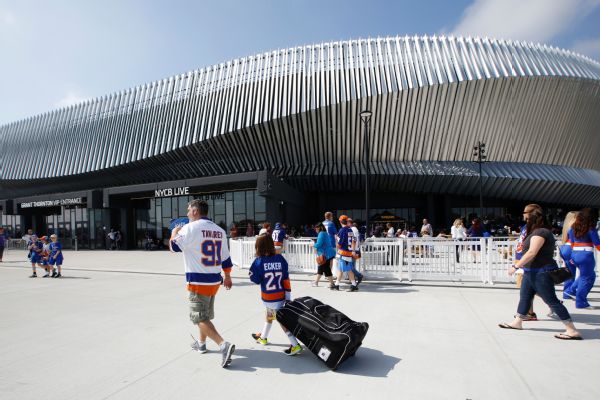 Ever since the New York Islanders relocated to Brooklyn's Barclays Center in 2015, many of their die-hard fans have clamored for an eventual return to their first home, the 46-year-old Nassau Coliseum.

Those prayers have finally been answered -- on a temporary and part-time basis.

For at least the next three seasons, the Islanders will split their home games between Barclays and Nassau while a new arena is constructed at Belmont Park racetrack. New York Governor Andrew Cuomo said the team will play half of their 120 home games at each arena ahead of the new building's expected opening in three years. The Islanders confirmed that 12 of their 41 regular-season home games in 2018-19 will be played at Nassau Coliseum. Both Barclays Center and Nassau Coliseum are owned by Brooklyn Sports & Entertainment.

Cuomo said that NHL commissioner Gary Bettman toured Nassau Coliseum last year and said that it wasn't suitable for an NHL team. Cuomo said the Coliseum promised to make "basic structural modifications" to fit the League's specifications, including improving the facility's ice-making capabilities. The Islanders' first game back at Nassau Coliseum could come as early as September, provided those upgrades are completed.

The Islanders had until Tuesday to opt out of their 25-year lease with Barclays Center, an arena many Islanders fans took issue with in the team's three seasons there. Barclays Center wasn't built for hockey -- hundreds of seats had obstructed views of the ice, the scoreboard above the rink was off-center and the stands were structured with gaps between fans and the boards so large that the arena used it to advertise sports utility vehicles during games.

Since the Islanders left, Nassau Coliseum has undergone a major renovation that reduced its capacity to roughly 13,000 seats for hockey, making it the smallest capacity arena to house an NHL team. Barclays Center holds 15,795 for hockey, while Winnipeg's MTS Centre holds 15,321.

The Islanders won a bid in December to build a 18,000-seat arena that would host around 150 events each year, as well as a hotel, a retail village and a 10,000-square-foot "innovation center" that will be developed with the community. The team is partnering with Sterling Project Development -- run by the Wilpon family, which owns the New York Mets -- and Oak View Group, which is also spearheading the redevelopment of KeyArena in Seattle for potential NHL expansion.

The arena deal was expected to keep the team's star center with the franchise, as John Tavares is scheduled to hit unrestricted free agency this July. But Tavares said he's also excited to get back to the old barn.

"The Coliseum is a special place. We had an exhibition game there this year and it brought back a lot of great memories. For me, it's where I started my career, it's where so many great things have happened. I really haven't thought about it a whole lot. But I've always said the team belongs on Long Island. It's where the team was born, created its identity," he said at the NHL All-Star Game in Tampa, via Newsday. "It's going to be a great opportunity, a great experience to go back there and to relive, and create some more, great history."
Report a correction or typo
Related topics:
sportsespnnassau coliseumnhlbarclays centernew york islanders
Copyright © 2022 ESPN Internet Ventures. All rights reserved.
TOP STORIES
Official admits police made 'wrong decision' in TX shooting
Texas survivor apologized to dad for blood on clothes, losing glasses
Massacre survivor says gunman told them: 'You're all gonna die'
16-year-old arrested after social media threat to shoot up NY school
Former Uvalde school teacher grieves for her mentor, students killed
Bank employees help kidnapped woman after she asks for loan
Summit on missing women and girls of color held in the Bronx
Show More
Bethpage Air Show cancels practice session
2 Long Island beaches close due to high bacteria levels
NYC officials, businesses hoping for post-pandemic summer of tourism
Jersey Shore, businesses prep for busy Memorial Day weekend
NYC beaches officially open to swimmers this Memorial Day weekend
More TOP STORIES News