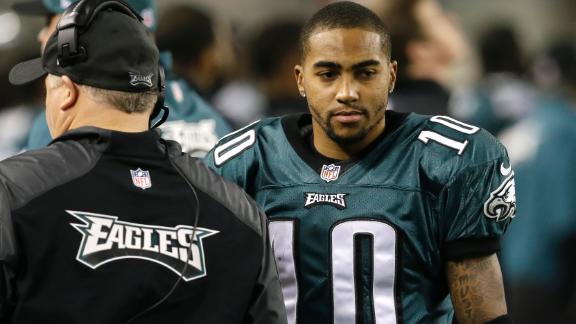 The Washington Redskins and wide receiver DeSean Jackson appear to be moving closer to an agreement on a contract, sources told ESPN.

Jackson arrived in northern Virginia on Monday night and dined with members of the Redskins coaching staff, including coach Jay Gruden. He later went to a club with current Redskins cornerback DeAngelo Hall and wide receiver Pierre Garcon. Both players have publicly stated their desire for Jackson to join the Redskins, as has quarterback Robert Griffin III.

"Very exciting player. Determined to show he is the best and hungry to win. My kinda guy," Griffin told ESPN's Britt McHenry.

Jackson met with the Redskins at their facility Tuesday. His agent remained and started talking contract numbers with the team, a league source told ESPN NFL Insider Adam Schefter. Jackson will spend Tuesday night in Washington and talks will continue between his agent and the Redskins on a possible deal, according to sources.

The Philadelphia Eagles released Jackson on Friday, and the Redskins were the first team to schedule a visit with him. No other visits, however, have been announced. However, the San Francisco 49ers have a "real but guarded" interest Jackson, according to a league source.

The Cleveland Browns also have serious interest, according to a source.

A league source told ESPN that at least nine teams reached out to Jackson's agent, Joel Segal, after the wideout's release. Jackson would give the Redskins a dynamic playmaker they have long lacked. Jackson has speed, is excellent after the catch and excels on intermediate routes. His arrival would give the Redskins a weapon on the other side that would scare defenses.

Washington also added receiver Andre Roberts on the first day of free agency. The plan was to play him inside and outside, but if Jackson signs, then Roberts could be relegated to mostly slot duty.

The Eagles released Jackson just two years after he signed a five-year contract extension. The three-time Pro Bowler was due to make $10.5 million in 2014 and was owed $30.5 million over the remainder of his contract, but none of that money was guaranteed.

Jackson has 356 career receptions, averaging 17.2 yards per catch. He has caught 32 touchdown passes. He also has three rushing touchdowns and four more on punt returns.

Jackson Continues Meeting With Redskins
Adam Schefter discusses the 49ers' interest level in DeSean Jackson if he doesn't sign with the Redskins.