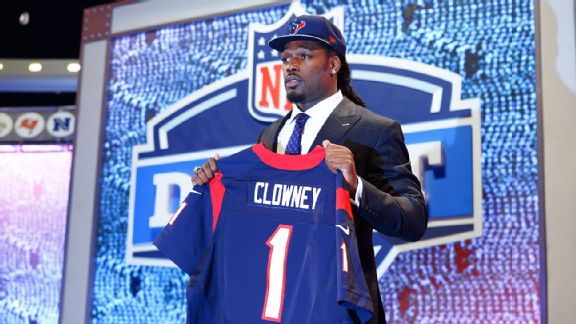 HOUSTON -- His words in the days before the NFL draft suggested confidence, as if Jadeveon Clowney knew something everyone else didn't.

It only seemed that way from afar.

The truth was, Clowney knew for sure that the Houston Texans would take him with the No. 1 overall pick only three minutes before their clock expired -- when they called him to tell him so. Then the tears fell from Clowney's eyes as he realized a scenario he'd predicted years before.

The Buffalo Bills moved up five spots to pick receiver Sammy Watkins at No. 4, sending the ninth overall selection and their 2015 first-round pick to the Cleveland Browns in order to nab the former Clemson star. Cleveland also received Buffalo's fourth-round pick in 2015.

It was one of three trades involving the Browns, who also moved up four spots to No. 22 to use their second first-round pick on Johnny Manziel, the polarizing 2012 Heisman winner.

The Oakland Raiders rounded out the top five by selecting linebacker Khalil Mack.

The Texans made Clowney the first defensive player selected first overall since they took defensive end Mario Williams in 2006.

The similarities don't stop there. Clowney will wear No. 90, the number Williams wore before leaving the Texans for Buffalo in free agency after the 2011 season.

"I think I have a lot to prove to people," Clowney said. "That's what I'm looking forward to, proving a lot of people wrong. I'm just ready to get down and get going with the Houston Texans."

Clowney joins a team that finished 2013 on a 14-game losing streak, has a new coach and still has uncertainty at quarterback. Coach Bill O'Brien said the team will take a quarterback at some point in the draft.

But while three quarterbacks were selected in Thursday's opening round, Houston didn't trade back into the round to get one.

The Texans considered trading the top pick, and remained open to the prospect throughout the process. But their asking price was steep.

"At the end of the day, that never materialized," general manager Rick Smith said. "We always felt very confident in the selection. And so we were very bullish in what we were asking for because we felt so good about the pick."

Although Houston thought an offer might come while it was on the clock, none did, making its decision clear.

The Texans are listening to offers and remain open to moving the first pick in Friday's second round, a team official told ESPN NFL Insider Adam Schefter.

Though some questioned Clowney's work ethic, the Texans never did. They didn't see any problems on film and took as confirmation the word of strength coach Craig Fitzgerald, who worked with the star pass-rusher at South Carolina.

"Did he play with his hair on fire every single snap? No," Smith said. "But do we worry about his work ethic? We don't at all. We think this guy will come in ... he's ready to work. After the selection, he talked about wanting to come in and work. This guy's motivated. He's extremely motivated. He wants to be great."

He's been great so far.

The 6-foot-5, 266-pound defensive end left high school as the No. 1-ranked player and shattered a South Carolina record for sacks, notching 13 in 2012. His 24 sacks in three seasons rank third all-time for the school, and he left college ranked fifth in forced fumbles and tackles for loss among active FBS players.

Clowney has played end throughout his career, but the Texans will ask him to play outside linebacker in defensive coordinator Romeo Crennel's 3-4 system. They're excited about not only Clowney's pass-rushing skills, but also his ability to set the edge against the run.

"I'm pretty athletic and I know I can play anywhere," Clowney said. "Whatever they want me to do, I'm willing to do."

Linebackers coach Mike Vrabel has experience with the transition Clowney will be asked to make, and he's already let Clowney know he will be tough on him.

The Texans already have an elite pass-rusher in end J.J. Watt, the NFL Defensive Player of the Year in 2012. Watt and Clowney spoke over the phone shortly after the selection. Watt wanted to make sure his new teammate knew he was going to push him.

"He told me he's going to give me every piece of knowledge to help me improve my game and he's going to stay on me like a mentor or a big brother to me," Clowney said. "And I told him I appreciate that, and I'm looking forward to working with him."

Texans Select Clowney No. 1
The Houston Texans drafted DE Jadeveon Clowney with the No. 1 overall pick.

Clowney On Being Drafted No. 1 Overall
Jadeveon Clowney talks after being drafted No. 1 overall by the Houston Texans.