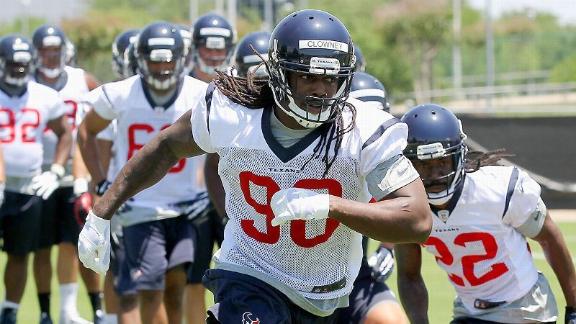 The Houston Texans signed Jadeveon Clowney, the top overall pick in the NFL draft, on Friday.

Clowney will get $22.272 million guaranteed, including a $14.518 million signing bonus, according to the Houston Chronicle.

The 6-foot-5, 266-pound defensive end left high school as the No. 1-ranked player and shattered a South Carolina record for sacks, notching 13 in 2012. His 24 sacks in three seasons rank third all time for the school, and he left college ranked fifth in forced fumbles and tackles for loss among active FBS players.

Clowney has played end throughout his career, but the Texans will ask him to play outside linebacker in defensive coordinator Romeo Crennel's 3-4 system. They're excited about not only Clowney's pass-rushing skills but also his ability to set the edge against the run.

"I'm pretty athletic, and I know I can play anywhere," Clowney said after the NFL draft. "Whatever they want me to do, I'm willing to do."