Jahlil Okafor: 'Hype about No. 1 is more for the fans' 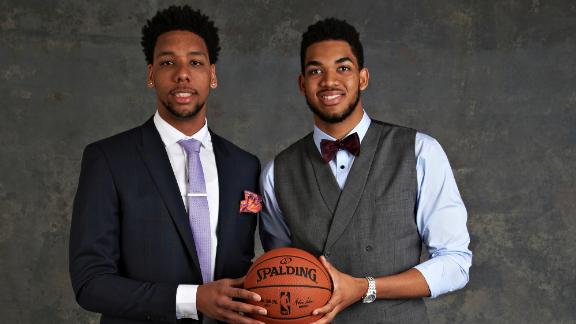 Center Jahlil Okafor doesn't seem to mind where he goes in the NBA draft as long as it's to a team that he feels is the right fit.

"I don't know that I should go No. 1," Okafor told SI Now. "I don't care. I just want to go to the right environment for me and the right team. I think the hype about No. 1 is more for the fans."

The Minnesota Timberwolves landed the first pick of the 2015 NBA draft in the league's annual lotteryTuesday. The Los Angeles Lakers will pick second, with the Philadelphia 76ers drawing the third choice, the New York Knicks the fourth and the Orlando Magic the fifth.

"We're going to get a great piece," Timberwolves coach Flip Saunders said after the lottery. "There are a lot of directions we can go. This gives us flexibility. We don't know who we're going to pick."

Former Lakers star Magic Johnson also was optimisticabout whomever the team will get with the No. 2 pick, tweeting that "with the #2 pick we can get a great big man, add some good free agents this summer & we will be right back as a contender next season!"

ESPN NBA Insider Chad Ford, in his latest mock draft, projects Towns to be selected No. 1 and for Okafor to go to the Lakers at No. 2.

The draft will be held at the Barclays Center, home of the Brooklyn Nets, on June 25.

Who will Timberwolves draft at No. 1?
ESPN college basketball analyst Jay Bilas says the Timberwolves will pick either Karl-Anthony Towns or Jahlil Okafor.