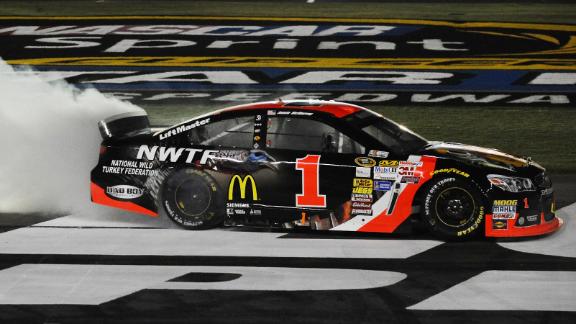 CONCORD, N.C. -- Jamie McMurray started his day at home with his young son, who vowed to spend the day playing in his sand box.

Then Carter McMurray asked his dad what he had planned for Saturday.

"I'm going to race for a million bucks,'" McMurray told him.

Race for it? Sure. Win it? With his Las Vegas odds at 40-1, McMurray was one of the biggest long shots Saturday night in the Sprint All-Star race.

But he pulled off a masterful upset, staging a tense door-to-door battle with Carl Edwards to grab the $1 million prize with his first All-Star victory. McMurray, who led a race-high 31 laps, had never before led a lap in the All-Star race, and his previous best finish in seven appearances in the exhibition was eighth.

McMurray was second on the restart for the 10-lap sprint to the checkered flag. Lined up outside of pole-sitter Edwards, McMurray flirted several times for the lead on a frantic lap around Charlotte Motor Speedway.

Although he surged slightly ahead several times, and the two cars appeared to touch more than once, McMurray finally cleared Edwards for the lead two laps into the fifth and final segment.

"As a kid, that is what you grew up wanting to do, is have a shootout like that and have a possibility to race for 10 laps," McMurray said. "He got a little bit of a jump on me on the restart and I was able to hang on to his quarter panel, and when we kept entering Turn 1 and 3, I was like, It is for a million bucks. If we wreck, it's not that big of a deal.'

Once he cleared Edwards, McMurray easily pulled away for the victory.

Edwards, who faded to fifth, immediately watched the replay after the race.

"Jamie just did a perfect job on the start. I had him cleared for a minute," Edwards said. "If I would have pulled in front of him in Turn 1, if I would have gone high, I think we would have won that race. But I was just so reluctant to give up the bottom. It was a drag race. My hat is off to him. He earned it."

McMurray's first career victory came at Charlotte in 2002 in his second start with Chip Ganassi Racing. He also won in 2010 and goes into the Coca-Cola 600 next Sunday needing a win in that race to have career victories in all three of Charlotte's main events.

Kevin Harvick finished second, Matt Kenseth was third and Dale Earnhardt Jr., who complained earlier in the race he was driving a dump truck, was fourth.

Kurt Busch was 11th after qualifying for the Indianapolis 500 earlier in the day.

It seemed to be a popular victory as several drivers made a point to congratulate McMurray in their post-race interviews as the driver took his Chevrolet to Victory Lane. He was met there by team owners Felix Sabates and Chip Ganassi, who flew into North Carolina before the race after Indianapolis 500 qualifying.

It was a tough day for Ganassi in Indianapolis, where none of his five cars made it into the Fast 9 qualifying round and Scott Dixon was his fastest driver at 15th.

"We obviously didn't have a good day in Indianapolis and you're damn right this turned the day around," said Ganassi, who kissed McMurray as he and Sabates cut the post-race news conference short to head back to Indianapolis Motor Speedway.

Kyle Busch won the first segment, but his night ended early in the second 20-lap segment when he used an aggressive move in a fast attempt to avoid running into the back of older brother, Kurt.

"His brother forced his hand," Clint Bowyer said of the accident that nearly collected his car. "Hell, I don't know how I didn't wreck."

The Busch brothers were running together when Kurt was too close to the outside wall and Kyle tried to dart into the middle lane to avoid hitting him. Instead, Kyle hit the back of Bowyer as he tried to swing around Bowyer into a third lane. Bowyer clipped him as Busch surged ahead, and it began a spin that sent Busch into the path of Joey Logano.

Busch failed to finish the All-Star race for the fifth time in nine years.

"I saw Kurt get really bottled up and about get in the wall, so he had to check-up real hard and my shot was in the middle, to go across three lanes and underneath Bowyer," Busch said. "But Bowyer blocked it and when he did, I got into him. Those are the opportunities you have to take in the All-Star."

Kasey Kahne went on to win that segment, and the third segment.

"I say just leave the car for now, felt pretty good right there," Kahne radioed after the third segment as his crew debated pit strategy.

But his night fell apart in the fourth segment when he hit the wall to damage his Chevrolet.

"I hit it hard. I blew it bad," he radioed. "Sorry, guys. I can't believe that happened. We had the best car here by far. Great, great car."