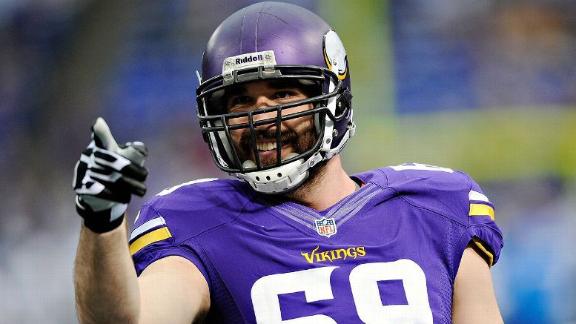 Pass-rusher Jared Allen has agreed to sign with the Seattle Seahawks and is in the process of finalizing a contract with the Super Bowl champions, according to league sources.

Barring unforeseen developments, Allen intends to sign as soon as Thursday while completing his second visit with coach Pete Carroll and the team.

In all likelihood, the team had to persuade Allen to accept being a situational player on its defensive line, a unit that was pivotal as Seattle dominated Peyton Manning and the Denver Broncos in the Super Bowl.

The Seahawks led the NFL in fewest points and yards allowed, and they created the most turnovers in the league, a triple last accomplished by the 1985 Chicago Bears.

Allen has 128.5 career sacks, ranking him 12th in league history. He has seven consecutive double-digit sack seasons, including 11.5 in 2013, but his contract is likely for significantly less than DeMarcus Ware and Julius Peppers got for changing teams in free agency.

The Broncos signed Ware for three years and $30 million, with $20 million guaranteed. Peppers accepted a three-year deal with the Green Bay Packers totaling $30 million maximum, $7.5 million of which is guaranteed.

The Seahawks have $15.2 million in salary-cap space but have been conservative in free agency because they will be pursuing long-term deals with Russell Wilson, Earl Thomas and Richard Sherman within the next 12 months.