Jared Goff picked No. 1 overall by Rams; Wentz goes No. 2 to Eagles 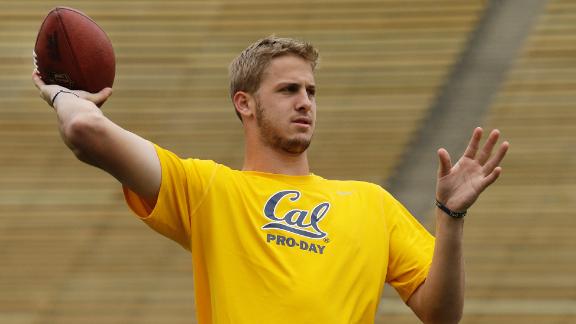 For the second time in seven years, the Los Angeles Rams used the first overall pick in the NFL draft on a quarterback. They kicked off Thursday's festivities by selecting California's Jared Goff.

Goff is the 22nd quarterback taken with the first overall pick in the common draft era (since 1967) and the first Cal quarterback to land in the first round since the Green Bay Packers tookAaron Rodgersat No. 24 in 2005.

Rodgers tweeted congratulations to Goff after the pick was announced.

In an interview with ESPN just before the draft, Goff said he was aSan Francisco 49ersfan growing up and would like to wear No. 16 with the Rams in honor of Hall of Famequarterback Joe Montana. Goff wore the number at California.

The Rams' choice comes after the team, which is returning to Los Angeles this season following its relocation from St. Louis, traded two first-, two second- and two third-round picks to the Tennessee Titans to move from No. 15 to No. 1. The Rams also received fourth- and sixth-round picks this year from Tennessee.

"I think I'm a good fit," Goff said. "I think how I felt with them and how they felt with me, I think there was similar thoughts about the way the game works, and I'm just excited to go down there and get a chance to work with them."

After moving up for the first pick, the Rams remained tight-lipped about their preference between Goff and North Dakota State's Carson Wentz, with coach Jeff Fisher repeatedly saying he didn't want to tip the pick and deny the chosen player the chance to get the phone call from the team telling him he is the guy.

Goff told ESPN after he was selected that it was an "unbelievable moment" to get the call from the Rams.

After the Rams took Goff, Wentz was selected No. 2 overall by thePhiladelphia Eagles, who had acquired the pick in a trade with the Cleveland Browns earlier this month. Ohio State defensive end Joey Bosa went No. 3 overall to the San Diego Chargers. He was followed by running back Ezekiel Elliott to the Dallas Cowboysat No. 4, cornerback Jalen Ramsey to the Jacksonville Jaguars, offensive tackle Ronnie Stanley to the Baltimore Ravensand defensive end DeForest Buckner to the San Francisco 49ers.

The Tennessee Titans, meanwhile, moved up to the eighth spot, acquiring offensive tackle Jack Conklin after a trade for the pick with the Browns. The Chicago Bears also made a trade, moving up two spots to No. 9 to take outside linebackerLeonard Floyd. The New York Giants rounded out the top 10 by snagging cornerback Eli Apple.

The Rams used the first pick in 2010 on quarterback Sam Bradford. He played for the team through 2014. In 2015, he was traded to Philadelphia for Nick Foles and a second-round pick after a pair of season-ending knee injuries.

In choosing Goff, the Rams hope he will improve a fledgling quarterback unit that ranks last in the NFL in Total QBR since 2007. The Rams haven't had a quarterback go to the Pro Bowl since Marc Bulger in 2006. The Rams bottomed out at the position in 2015 and ranked last in the league in passing yards (2,805), QBR (35.6), yards per attempt (6.2) and passing touchdowns (11).

"Jared has a skill set that is special," Fisher said. "He's got a quick release, he understands the quarterback position, he's going to get rid of the football, and he's competitive. Once you look at his body of work in the red zone, it's impressive. He keeps drives alive. Nothing is too big for him."

In three seasons as the starter at Cal, Goff had more completions, passing yards and touchdowns than any quarterback in school history. He threw for 4,719 yards and 43 touchdowns in 2015 and owns 26 school records.

Goff comes from Cal's "Bear Raid" spread offense in which he spent more than 99 percent of his time taking snaps out of the shotgun. He will likely have an adjustment to make upon arrival in Los Angeles, as the Rams were in a shotgun or pistol formation on fewer plays than any other team in the NFL in 2015.

"If you look at his college film, I think there's a natural instinct to anticipate, to get the ball out quickly, read coverages quickly," general manager Les Snead said. "There's some DNA that just comes natural. I think whether you are an air raid or whatever offense and how they're going to name it, you kind of notice that in players whether they have that special quality or not."

At 6-foot-4, 215 pounds, Goff drew questions about his hand size during the pre-draft process, many of which stemmed from his 23 fumbles (11 lost) in three seasons.

Now that Goff is in the fold, attention turns to how soon he will take over as the starter. The Rams used a first-round tender to retain Case Keenum as a restricted free agent, and he could serve as a short-term bridge until the Rams decide Goff is ready. Fisher said before the draft that whichever quarterback the Rams took would not play before he is ready, though Fisher made it clear that the wait probably won't be long for Goff.

"We've always had this philosophy that we're going to play them when we think they're ready," Fisher said. "We're not going to subject them to fail, so whenever that is, you're going to see him under center, but we're not going to come out and day one announce him as the starter. I think it's going to happen pretty soon, sooner than probably later, but we have got some things to do coaching wise, the coaching staff. He's got to learn the offense, get to know his teammates, start getting in sync with the receivers, so when that happens, I don't know."

In the meantime, the Rams will likely have to remove a quarterback from their roster. That's expected to be Foles, whom the team is hoping to trade. A league source said Thursday that four or five teams have reached out and will keep in touch over the next couple of days as they pick quarterbacks or miss out on them throughout the draft. The Rams paid Foles a $6 million roster bonus in March.