Jenrry Mejia believes MLB was out to get him, union was no help 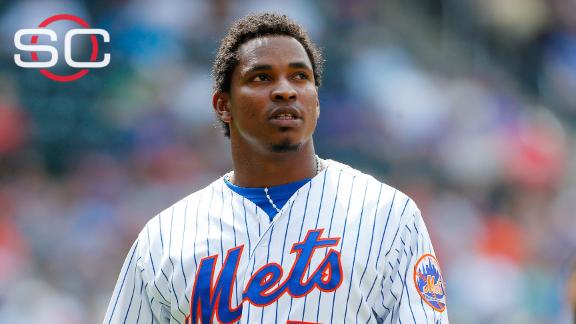 ESPN
In Jenrry Mejia's first extensive public comments since he became the first player to be permanently suspended by Major League Baseball for failing three tests for performance-enhancing substances, the New York Mets reliever told The New York Times that he was the victim of a witch hunt by the league.

Mejia also told the Times that the players' union should have found grounds for an appeal.

The 26-year-old Mejia was originally handed an 80-game suspension in April after he tested positive for stanozolol, an anabolic steroid. In July, three weeks and seven appearances into his return with the Mets, he was suspended 162 games for testing positive for both stanozolol and boldenone. The second positive test actually occurred while Mejia was still serving the first suspension, the league said.

In February, MLB said Mejia again tested positive for boldenone, which athletes have used to increase muscle mass and once was popular for use in horse racing. It marked Mejia's third positive PED test in the past year, triggering the lifetime expulsion.

In a Thursday interview with the Times, the 26-year-old said he was only guilty of the first offense. Mejia said the second positive test wasn't accurate and, after its results were announced, MLB officials pressured him to share information about his doping connections.

Speaking through an interpreter, Mejia told the Times that MLB officials told him that if he appealed the results of the second test, "They will find a way to find a third positive." He added that he felt he was being conspired against by the league.

MLB spokesman Pat Courtney denied that charge to the Times, saying no one from the league or representing it had met with Mejia. Peter Greenberg, Mejia's agent, couldn't immediately be reached by the Times for comment.

Mejia told the Times that he had also turned to the players' union for help, but was told there were no grounds to appeal.

"They should have found something to appeal for," Mejia told the newspaper.

Mejia told the newspaper he doesn't have any regrets.

Mejia may apply to commissioner Rob Manfred for reinstatement in one year. If reinstated, he still would have to sit out through the 2017 season before being able to pitch again in the majors. If an application is made and denied, Mejia could ask baseball's arbitrator to end the ban, claiming the penalty is without "just cause.'' The arbitrator cannot reduce the ban to less than two years.

Mejia is the first major or minor league player to receive a permanent suspension under MLB's drug program. Texas Rangers outfielder Josh Hamilton, then in the minors, was suspended several times for drugs of abuse from 2003 to '05, but was allowed to return each time. In 1992, when there was not a drug agreement in place, Steve Howe was suspended for life by Commissioner Fay Vincent after the pitcher's seventh drug- or alcohol-related incident. Arbitrator George Nicolau said doctors concluded Howe suffered from attention deficit hyperactivity disorder and cut the suspension to time served, which was 119 days.

Vincent White, a lawyer specializing in labor disputes, has been retained by Mejia, who was tendered a contract in December for the 2016 season despite the two previous known PED violations.

White told the Times he's unsure what, if any, legal avenues they would pursue.

Information from ESPN's Adam Rubin and The Associated Press was used in this report.