Jenrry Mejia latest player suspended for use of Stanozolol 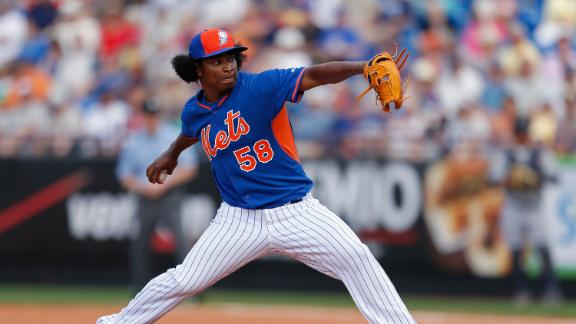 ESPN
By Adam Rubin
ATLANTA -- New York Mets closer Jenrry Mejiahas "disappointed" his teammates and coaches with the announcement of his 80-game suspension for the use of the steroid Stanozolol on Saturday.


"We're very disappointed. I mean, extremely disappointed," Mets manager Terry Collins said. "We came into this whole thing in spring training with huge expectations and the back end of our bullpen being very, very strong. So we're all shocked and disappointed, but we stand by the rules and what Major League Baseball has put down. We'll have to regroup and get through the next 80 games with somebody else."


"It's obviously disappointing. Not only do you cost yourself 80 games and don't get paid, but you're hurting everybody in here," the Mets captain said. "You're letting down your teammates. That probably means just as much if not more than hurting yourself."


A person familiar with the penalties told The Associated Press that MLB has not found any links to the four positive tests. The person spoke on condition of anonymity because the probe is ongoing.


Asked Saturday whether the Major League Baseball Players Association was worried there was a connection between the four positive tests for Stanozolol, union spokesman Greg Bouris said: "We are always concerned when there's a positive test, regardless of the substance."


Wright said there have been numerous discussions of the league's drug policy.


"I think that the players' association, the commissioner's office, everybody in baseball has done their best to try to clean up this game as much as possible," he said. "And as much as it hurts, as much as we love Jenrry as a teammate, you make a mistake and you need to be punished. Once Jenrry serves his punishment and comes back, we'll welcome him and do whatever we can to make him feel like he's a part of this team.


"But for right now, he messed up and he needs to be punished."


Mejia, 25, began last season in the rotation but ultimately converted 28 saves in 31 chances.


He had not pitched this season. Mejia experienced stiffness in the back of his right elbow while warming up in the bullpen for a potential save on Opening Day against the Washington Nationals and never entered. He had been placed on the 15-day disabled list Tuesday. Time spent on the DL while recuperating from the elbow inflammation will count toward the suspension.


"I know the rules are the rules and I will accept my punishment, but I can honestly say I have no idea how a banned substance ended up in my system," Mejia said in a statement.


Mejia also will be ineligible for the postseason should the Mets qualify, based on a stipulation added to MLB's suspension policy before last season, a team official confirmed.


Collins said team officials first received information about the suspension Saturday. Collins shared the news with players before they headed out for batting practice late Saturday afternoon at Turner Field.


Said Collins: "I just said, 'Listen, we've got a game to play tonight. We've got to worry about that game. We can't worry about stuff that we have no control over. We don't have any control over this. So I'd appreciate it if you guys just got ready to play, and we'll address it at another time.'"


"There's guys that continue to try to cheat the system or fail drug tests," Wright said. "So the good news is it seems like the program is working. We're trying to weed out the people that gain an unfair advantage. Unfortunately, this time it's a teammate."


Bobby Parnell, who preceded Mejia as closer, is in the final stages of his rehab from Tommy John surgery. He will not be rushed back, though. Parnell already has started pitching in extended spring training games in Port St. Lucie, Florida. He could be activated May 1, or slightly sooner.


Fellow late-inning reliever Vic Black also opened the season on the disabled list with what the team has described as shoulder weakness.


Jeurys Familia has taken over the closer role for the Mets for the time being.


On Parnell's ETA, Collins said: "The one thing we aren't going to do -- we aren't going to rush him back. I just think it's unfair for Bobby to do that. We certainly hadn't done it with anybody else. Yes, we're in a situation where we certainly can use Bobby Parnell and Vic Black. But there's a process that they've got to go through to get ready. We'll abide by that."


For a team with designs on snapping a streak of six straight losing seasons and competing for a postseason berth, Collins acknowledged Mejia's suspension stings.


"It happens in the business, but it's a little damper," Collins said. "I'm going to be honest: I love this kid. We challenged this guy last year. He stepped up and did a great job for us. Certainly this is a big disappointment. I understand everything about it. I really do. But you know what? There are 24 other guys in that locker room who need him, too. That's why it's real disappointing. ...


"This is something we hoped we could avoid, obviously, through the education that's been given to these guys in recent years. Now, all of a sudden, the other guys on this team are saying, 'What are we going to do now?' instead of worrying about, 'Hey, look, let's move ahead and let's still get ready to play.'"


Collins said he would not go so far as to label Mejia's actions "selfish."


Asked if he was skeptical about Mejia's assertion that the closer did not knowingly put a banned substance into his body, Collins said: "I know what goes in mine. I can't answer for everybody. I certainly wasn't there. All I can tell you is, again, we're just extremely disappointed at this particular moment because now we've got to retool. And it's tough to do when you're in midseason."