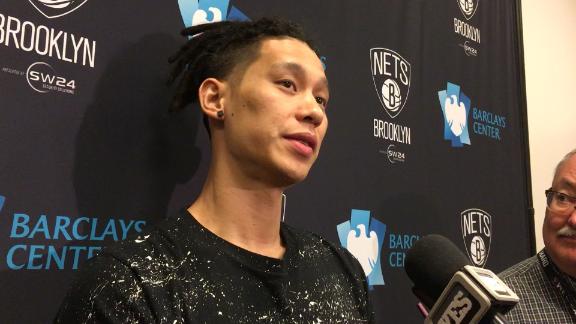 ESPN
By Ohm Youngmisuk
NEW YORK -- Brooklyn Nets point guard Jeremy Lin expects to be ready for training camp in the fall and says his right patella tendon injury will not prevent him from playing his same attacking style.

In his first comments to U.S. media since rupturing his patella tendon on the Brooklyn Nets' opening night in October, Lin said his rehab at Fortius Sport and Health in Vancouver is going "really smooth" with "no issues" and that he has been told that "complete full recovery" is expected.

"Shoot, if I am not [ready by training camp], there's issues," Lin said playfully before the Nets played the Los Angeles Lakers at Barclays Center.

The Nets point guard has no plans to change his attacking style or shy away from physical contact on drives to the basket. Lin says he will be more deliberate and safer in his movements and landings.

"I am not going to change the bread and butter of who I am, which is downhill, attacking, dynamic playmaking. I will always be that player," Lin said. "Maybe the type of risks ... I don't know, I never really saw them as risks, but what we will see is probably a similar style but in a safer way. I will still be in the paint heavy, but I won't be landing on my legs the same way, getting off-balanced unless obviously I am forced to, but the landing, taking contact, being able to engage certain muscles before contact, before I take off, all those things are really, really important ... A lot of other muscles will be absorbing impact that maybe joints shouldn't be."

Lin gave very few details about his rehab and whether he is doing any basketball-related activities since landing hard after a drive to the basket in a 140-131 loss to the Indiana Pacers on Oct. 18.

"It's going really smooth," said Lin, who pointed out that the rehab center in Vancouver is in constant communication with the Nets. "Everything is how we would expect it to be. No issues on that end. I think one of the big reasons [for rehabbing in Vancouver] is just that it's hard with the team traveling back and forth, especially early on after surgery when you can't really fly ... This process is something that requires quite a bit of time. It's really become a lifestyle for me in terms of devoting [time]."

"It's just addressing a lot of muscle imbalances, movement deficiencies, all these different things," he added. "The way I sit, the way I stand, the way I squat, run, jump and shoot, all the way down the line. We're fixing everything so I can look as close to picture-perfect, I mean, perfection in this situation is kind of a ghost, but it's as much improvement as you can get. You want to chase it and get as close as you can so that you move more healthily, you reduce chances of injury, and I'm also going to be more explosive and faster and better and more on balance because of it. I expect to see that translate to things like shooting percentage when it comes to balance, defense, things like that. So a lot of posture work, a lot of firing muscles that used to not fire."

Lin, who was limited to 36 games last season due to hamstring issues, also said he isn't interested in hearing how other athletes who have suffered the same patella tendon injury have fared in their return to form and that he wants to focus on his own path to recovery.

"Quite honestly, I don't really talk to other people who have had this injury," Lin said. "I don't really mean it in an arrogant way, I just don't care about their experiences in terms of if they feel like they didn't come back 100 percent. That is them, that is their body, like, whatever is going to happen to me is going to happen to me. I know how much I am putting in, and I know how different I will be after. What somebody's else's process, to me really I don't care."

"Everyone [involved] is saying that it will be a complete full recovery," Lin added. "It is not like an ACL, where you are fully cleared and then the next year you see a huge drop-off in performance. That is the not the case with patellar tendons historically. Again, history is not really something that is super appealing to me right now. I don't want to get caught up in someone else's journey. I feel like I am ready to take on this thing, and when I get healthy I will be a new me."

Lin: 'Don't want to get caught in someone else's journey'
Jeremy Lin explains why he doesn't discuss his right patella tendon injury with other players who had a similar injury and how his game will change when he returns.
Report a correction or typo
Related topics:
sportsespnpatella tendonchina chinaattackinjurynbajeremy linbrooklyn nets
Copyright © 2020 ESPN Internet Ventures. All rights reserved.
More Videos
From CNN Newsource affiliates
TOP STORIES